Listening to the Master
copyright 2011, aaron paul lazar
Whenever I'm stuck with my writing, or feel like it's just a pile of rotten junk masquerading as a story, or when I just need a boost of inspiration, I turn to John D. MacDonald, my long time favorite author. Today I started scanning the "Look Inside the Book" feature of MacDonald's Travis McGee series, the books that probably influenced my writing more than any writing teacher ever could hope to influence his student. I decided to read just the first page of some old time favorites, like The Deep Blue Goodbye, A Deadly Shade of Gold, The Green Ripper, The Empty Copper Sea, Cinnamon Skin, Free Fall in Crimson, and anything else that caught my eye today.
John Saul, in his intro to many of MacDonald's books, says, "There's only one thing as good as reading a John D. MacDonald novel: reading it again. A writer way ahead of his time, his Travis McGee books are as entertaining, insightful, and suspenseful today as the first moment I read them. He is the all time master of the American Mystery novel."
I always agreed with this - and I'm in good company, because Dean Koontz also cites MacDonald as one of his biggest influences. Mr. Koontz is among the top writers of this generation whose passages can make me swoon, and who makes me want to be just like him when I grow up.
Let's take a look at some of John D. MacDonald's first pages. You'll see as you read through some of these examples, that the master can be deep and poetic, or straight and simple. But he always tells the story without any fussiness, and at the same time can drill right into your heart like a narrative poet. The following is one of my favorites. (click on book cover to buy from Amazon) 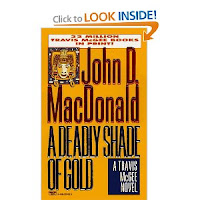 A smear of fresh blood has a metallic smell. It smells like freshly sheared copper. It is a clean and impersonal smell, quite astonishing the first time you smell it. It changes quickly, to a fetid, fudgier smell, as the cells die and thicken.
When it is the blood of a stranger, there is an atavistic withdrawal, a toughening of response, a wary reluctance for any involvement. When it is your own, you want to know how bad it is.
When I read this, I didn't stumble over the four uses of the word "smell" in the first graph. I can just imagine a crit group jumping on a new writer who might do this. I know I've struggled to avoid word repetition religiously. But in this case, it not only works, it strengthens the images.
Nor do I worry about the use of the "to be" form, where he says what "is" and what "was" without apologies. I love his simple putting forth of the image, mixed with the complex shading. The use of "fudgier smell" is brilliant and unique. And the fact that he uses a no-so-common word as "atavistic"(reverting to or suggesting the characteristics of a remote ancestor or primitive type. Yeah, I had to look it up!) makes you aware that this man is well-read and schooled, but he doesn't have to use a slew of synonyms for "smell" to prove it.
Here's another great opener: 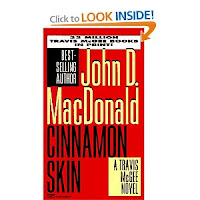 There are no hundred percent heroes.
Every man can be broken when things happen to him in a certain order, with a momentum and an intensity that awaken ancient fears in the back of his mind. He knows what he must do, but suddenly the body will not obey the mind. Panic becomes like an unbearably shrill sound.
I was trying to explain this to Annie Renzetti, the trim, tidy, and loving person who had been an essential part of my life for many months. It was late June, summer season at the resort she manages, the Eden Beach, near Naples, Florida.
Here we jump from a philosophical bit that makes you wonder what in the world happened to break this man, and we jump right into the actual moment - Travis lying on the beach with his latest love. I wish I could have used more of the first chapter, because there were some amazing examples of MacDonald's use of the sensual, rich approach he intermingles with all of his McGee mysteries. There is always the scent of girl, the voluptuous softness of girl, the sandy rump of girl... throughout his taut and highly touted mysteries. He mixes these two elements with grace, a natural ability, and incredible style. And I don't believe I've ever read another mystery author who has done this so cleverly.
In the inner jackets of the McGee books, Donald Westlake says, "Travis McGee is the last of the great knights errant; honorable, sensual, skillful, and tough. I can't think of anyone who has replaced him. I can't think of anyone who would dare."
I sure can't argue with that.
Here's another look at a beginning that begs you to read more. A great example of plopping your reader right into the action. 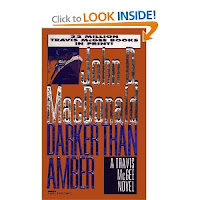 We were about to give up and call it a night when somebody dropped the girl off the bridge.
They came to a yelping stop overhead, out of sight, dumped her over the bridge railing, and took off.

It was a hot Monday night in June. With moon. It was just past midnight, and just past the tide change. A billion bugs were vectoring in on us as the wind began to die.

It seemed to be a very final way of busting up a romance.


What I particularly admire about MacDonald's writing is that he can be a poet, a political commentator, a philospher who sees the true nature of man... or he can simply tell you what he sees in short, terse fragments. "With moon." I love that.
Let's do one more. 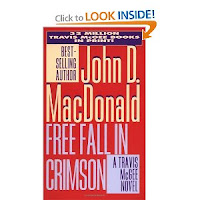 We talked past midnight, sat in the deck chairs on the sun deck of the Busted Flush with the starry April sky overhead, talked quietly, and listened to the night. Creaks and sighs of hulls, slap of small waves against pilings, muted motor noises of the fans and generators and pumps aboard the work boats and play toys.

"I don't really know how the law works," Ron Esterland said. "But I would think if you arranged someone's death, even if he were dying already, you wouldn't inherit."


Here we once again see MacDonald's ability to use fragments without shame. He doesn't use a "the" in front of "slap of small waves...", nor does he need it. He paints the picture with what seems like an effortless flourish.
This exercise makes me want to re-read all of the Travis McGee series. I have them all in my book collection, even though nowadays I'd like to load them into my Kindle, as well. They don't seem to be available yet, but I'm sure it's just a matter of time.
Stay warm, take pleasure in the little things, and remember - if you love to write, write like the wind!
Aaron Paul Lazar
www.legardemysteries.com

I encourage you all to go out and buy one of these books today, or stop by your local library where I'm sure they'll have all of them on their own shelf of honor. ;o)

I too have been a fans of John D. MacDonald, and the straight no chaser approach he brings to his writing. I've found his descritions both visually and viscerally arresting, and his dialog quick and riveting as anyone I've ever read. Like you, whenever I need to "pick up the scent" in my writing, I turn to reading my favorites to regain the groove and rhythm I need. You could not have picked a better inspiration.

Thanks, Ron! After reading your book (Key Lime Squeeze), I'm not surprised you appreciate the writing of Mr. MacDonald. ;o) Thanks!

Hmm, makes me want to check my shelves too. What a great author to spotlight.

Just want to add one thing to your comment about repetition. You're right that an over-zealous reader today would most likely want to suggest cutting the repetitive words, but the beauty in them when done correctly, as in this case, is that they serves to emphasize the author's point. I found myself taking deeper breaths when I read it. LOL

I'm so glad you enjoyed the excerpts from these books, Marta. When you love something as much as I love Mr. MacDonald's work, you ache to share it with your friends, and the world. This is a great vehicle for us to do just that. ;o) Looking forward to the next Author of the Month piece!

I cut my teeth on JDM books. My parents kept them all and every issue of readers digest ever published I think. They were all donated after my patents passed away much to my chagrin today. Sigh. Great post!

Kim, isn't it cool that we both (and Ron, too!) started out reading these books. Amazing stuff. I also loved Dick Francis and devoured his books in my twenties and thirties. ;o) Not to mention all the other greats of the time - Rex Stout, Dame Agatha, and more...