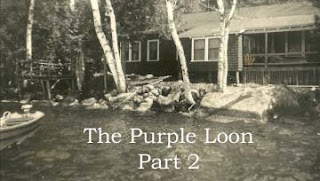 I stood and watched for several minutes as the ash floated, dispersed, and finally dissipated beneath the mirrored water. The sun was starting to sink low in the west, and the mist that always rose from Loon Lake at dusk was just appearing, ghost-like above the surface. I crossed myself, a final act of respect for my dear departed sister, and started back to the car.

It took a second to realize Zak had let the boredom overcome him, and he was nowhere in sight.

No doubt off exploring the decaying ruins of my family’s favorite vacation spot. I detoured from the car and started down the washed out gravel road between the cottages. The shadows from the setting sun were lengthening with every step, and the mists were beginning to muffle the sounds.

“Zak! C’mon buddy, let’s get outta here before it gets too late!"

I listened for the sounds of footsteps, and heard none. I continued further down the row, calling out every few seconds. The air was turning cool and damp as the shadows took over the light. As warm and inviting as this place was in the summers of my youth, as a father searching for his missing son it was ominous and foreboding.

I continued on, past the diminutive general store building that used to sell the summer guests kindling for campfires, charcoal for their grills and all the ingredients for the best S’mores ever made. If not for the growing panic in the pit of my stomach, it was an enjoyable stroll down memory lane. I couldn’t fathom why Daphne kept the place at first, and I was completely lost as to why she said she sold it. We never lied to each other before. We lied to our parents when we got in trouble, and to the principal the day we skipped school to go the Red Sox game, taking the "T" all the way to Fenway Park. But never to each other.

I was moving at a jog towards the dining hall, when I saw the swirl of the mist and the shadow of another person moving towards the old dining hall. I quickened my pace, finally breaking into a run as I went straight for the hall. The door swung shut as I reached it, and I burst through with a flourish.

“Dad?! What the hell…?” Zak yelled, pulling the earbuds for the I-pod out of his ears. I grabbed his shoulders caught somewhere between fury, panic, and relief. I should have let him have it, blast him for wandering off. I hugged him instead.

“C’mon, Zak. I want to get back to Portland tonight before we head home in the morning.”

“You used to come up here all the time when you were kids?” he asked, kicking through years of dust.

“Yeah, like a million years ago. “ My mind wandered off to the evening meals with all the other families that stayed here.

“Dad!” I heard Zak call from across the room. “Come here, quick!”

***
See Part 1 of this story, here. Part 2 was written by the author of Key Lime Squeeze, Ron Adams. The next installment will be courtesy of Marta Stephens, on Wednesday, March 30th.
Posted by Ron Adams at Tuesday, March 29, 2011

Nicely done, Ron! I can't wait to see what Zak found. You carried through the mood and style of the first chapter beautifully. Hey, maybe some day we should collaborate on a mystery. ;o)

This story should be published. Just saying. Xoxo

Not that we three should be biased or anything... Thanks guys, this was a lot of fun and I hope the next segments are equally entertaining. What say ye, Gentle Readers?

It's been interesting to see what we each have added our own special twists. Nice job Ron!