Book signings leave me scratching my head. They are sort of like a garage sale, sometimes. I do not like having a garage sale because it is not in my DNA to be a saleswoman.

It is the same with flea markets. I can buy things I like or want, but selling? Not my forte. In fact, I probably give more stuff away at yard sales than I make.

So you can understand my chagrin when I realize that all the sales of my book are up to me. Yes, no publicity nor marketing help from anyone in my corner at this time has left all the finer points to me. This part of being a writer is the hardest of all, in my opinion.

If you are a published author, you probably look forward to book signings so that you can connect with your readers. But what about the author who has self-pubbed or is indie pubbed? Or even those who chose electronic only? What do they do for book signings? In fact, electronic only authors, what do you USE to have a sale in a face-to-face event? 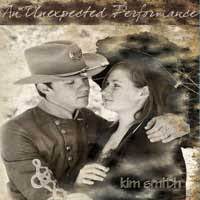 I am promoting my self-pubbed book, An Unexpected Performance. This weekend I will be at the Bartlett Festival in Bartlett, TN signing and selling. It will be hot. 88 degrees with a heat index of middle 90s.

I am ready, I think. I have my books, bookmarks, and poster. What else can I take?
Posted by Kim Smith at Thursday, September 26, 2013 2 comments:

Do you love to hold a print book in your hands, and when you're done, put it on a special place on your bookshelf?

For those of you who've been wanting to read DON'T LET THE WIND CATCH YOU or UPSTAGED, book 2 in the LeGarde Mystery series,  I'm giving away two print copies of each to winners in the US and Canada. Enter below!

Don't Let the Wind Catch You

Posted by Aaron Paul Lazar at Sunday, September 22, 2013 No comments:

How a Rocket Scientist Becomes a Writer, by Stephanie Osborn