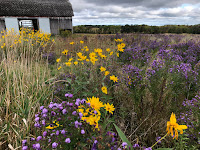 Can you believe it's already October? The summer just flew by, didn't it? We had a wonderful season here in Western NY. Plenty of good "swimming" days and one of the best growing seasons ever. I fed seven different families with my tomatoes and cukes this summer! The weather has been phenomenal, perfect for morning walks, where I snapped this photo of Jerulsalem Artichokes and wild purple asters.

I'm working on my twenty-ninth book, book 13 in the LeGarde Mystery series. But it's going slowly. Sometimes I feel discouraged, but when I reach out to my author friends, things get better fast. ;o)

One of the best ways to feel connected with other writers is to share in the process of creation and to finish the cycle by reviewing your friends' work.

Some of my closest writer pals and I swap chapters as we write them. We catch errors and provide feedback to each other as the stories develop. It's incredibly rewarding with well-chosen writing partners.

I also belong to a group of wonderful authors who swap books and post honest reviews for each other. Fortunately, each of the members was carefully selected by our leader and so far I've really enjoyed each title.

I thought I'd share some of these books and reviews with you today. Sound good? 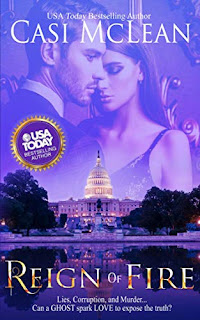 Reign of Fire by Casi McClean

I’m not going to rehash the plot, because you can easily read about it in the book description or in the many other reviews. I’d rather tell you what I enjoyed.

As always, although it wasn’t the primary theme in this story, I absolutely love the elements of the wounded warrior and the dog who I’m hoping will become his best companion in the next books in the series.

I also really appreciated the deep sense of true patriotism shown by the author in her analysis of what’s gone wrong in government, why we need to return to our ideals as a nation, and how the “Deep State” has taken control of so many aspects of our lives purely for power and money. Many of the fundamental ideas discussed by the characters rang true to me and I cheered them on as they tried to “drain the swamp” and expose the sleazy politicians.

While there is a great deal of political theorizing and revelation going on, there are also many action-packed scenes that move the plot forward. My favorite scene was the sting set up between the heroes and the villain in a Washington park at night. The tension was high, the action was well-depicted, and the environment was beautifully described. I felt as if I were right beside Ash and Emily. I could feel the cool March breeze on my face, smell the cherry blossoms, and relate to the adrenaline shooting through the heroes’ veins.

Anyone who reads this first story in the series will want to continue to see what ungodly secrets our new heroic team discovers about our government. I, for one, will be cheering them on throughout the series! 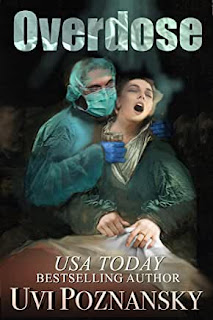 Overdose (Ash Suspense Thrillers with a Dash of Romance Book 3)

Overdose is the third volume in the “Ash Suspense Thrillers with a Dash of Romance” series. I’ve enjoyed all three books and must say this one was just as good if not even a tad better than the others!
Ash is a young college girl to whom terrible things happen, but she always comes through with guts and courage to survive, thrive, and get even with the villains. In this edition, Ash becomes a victim of a very powerful player, whose name I’ve withheld so as not to spoil the story for you!
The characters created by Ms. Poznansky are vivid and truly enjoyable. I especially love the dialog and relationship between Ash and her mother, otherwise known as “Ma.” We didn’t see much of Browny (her beloved dog) in this episode, but I’m sure he’ll be back for more in the future. Love the dog!
After surviving a harrowing ordeal in the last book, where she barely survived a horrible attack and ensuing coma, Ash now suffers from mysterious and frequent headaches with other bizarre symptoms. Buy the book and discover the nefarious plot behind her symptoms that has far-reaching consequences.
I read both the eBook and listened to the new audiobook, which I found extremely well done. The narrator was a pleasure to listen to.
I’ve always enjoyed Ms. Poznansky’s writing. It is smooth, lyrical, and original. Well done!
Highly recommended by Aaron Paul Lazar. 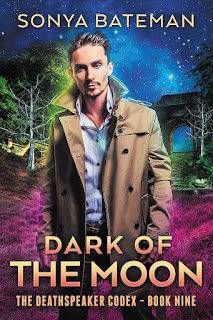 Dark of the Moon (The DeathSpeaker Codex Book 9)

I’ve loved every one of the DeathSpeaker series, in spite of the fact that I don’t normally read this genre. I’m usually an “it’s all mysteries” kind of reader. But it’s the author I love, and her amazing ability to create addictive characters whose worlds become so real you truly think you’re there standing alongside Gideon Black and his family and friends.
In this book, Dark of the Moon, everything is racheted up tenfold! The action, the wild and colorful environments, the emotions…. Oh, the emotions! If you read the last heartbreaking edition, you’ll know what I mean.
Gideon is suffering from a terrible, black-hole kind of loss. His brother, Taeral, died in the last book to save Gideon’s life. This crusty, grumpy, wonderful, and also lovable guy was a huge loss, and I was MAD at Bateman for taking him away from us.
But in this book, well, let me say without spoiling things that Bateman has a chance at redemption.
The vivid descriptions of lands you could never imagine in your whole life, the ACTION (oh my gosh, the action was incredible), the nonstop suspense and the thrills were just out of this world. Well, much of it did happen “out of this world,” but really, no pun intended. ;o)
Give yourself a treat and read what may become your very favorite of all the great books in this series! 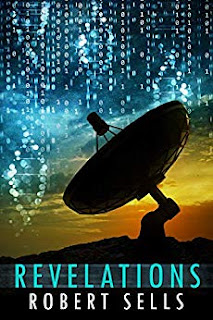 Revelations by Robert Sells captured me from page one. The story is full of suspense and doesn’t let up for a minute. I’m normally a “mysteries only” kind of reader, but I made an exception for this book as I’ve enjoyed many of Sells’ previous titles, including Reap the Whirlwind, another story that required incredible imagination. I found Revelations to be engrossing and immensely entertaining.
Robert Sells has a background teaching physics, and his knowledge is beautifully showcased in this book. Not only is he a man of science, but he’s also one heck of a writer.
I loved his ability to put together a story from multiple points of view set over the expanse of the entire nation. His characters jumped off the page, used “true to life” genuine dialog, and made you either root for them or jeer them as the story progressed. Being invested in the characters is the most important element for this reader. If you don’t care about them, you might as well stop reading!
You have to be a bit impervious to gore in certain sections, because the nature of a fight against alien insect-like creatures must, by needs, be brutal!
My favorite characters were by far scientist Aster Worthington and the army Ranger Brock Adamson, who was assigned to help protect her and beat the teeming hive of aliens living in the giant Dome. Loved the oppositional personalities (at first) and the surprising resultant relationship.
Well done, Mr. Sells! 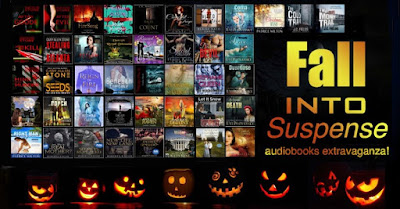