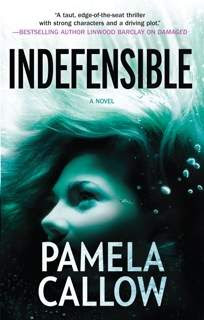 Kate Lange is recovering from a life-threatening attack, and it has made her assess her life, and the actualities of it with a new eye. As the heroine in Pamela Callow’s romantic suspense, Indefensible, she is faced with a case that feels like it has already been tried and the decision made. Randall Barrett is not only her client, he is her boss, and unfortunately a perfect suspect in the death of his ex-wife, Elise.

Callow sets her story in Halifax, and we feel as though we are there where Kate has her daily runs. and a family is torn asunder. Callow paints a vivid picture of how the family is involved, embroiled, and lost from the moment Elise is found until the very end when the killer is revealed. I have not had the privilege of reading any of Ms. Callow's work before now, but this book makes her truly an author to find and savor.

With edgy pacing and true-to-life dialogue, the reader is sent spinning into the churnings of a good suspense novel, tinged with romance and the legal world. She deftly takes the reader through the story carefully laying the groundwork to keep us turning pages. A story which made me think of the intricacies of the genre and how plots should be done. Kate Lange is a welcome addition to the ranks of legal suspense characters, and I’m looking forward to more great things from this wonderful author, Pamela Callow.

_____________
by Kim Smith
Kim Smith is the author of the wildly popular Shannon Wallace Mysteries. The third book in the series, Crooked Angel, has been accepted and will be out later in 2011 from Red Rose Publishing.
Posted by Kim Smith at Thursday, March 10, 2011

Kim, it's quite a coincidence that I JUST finished reading DAMAGED, Pamela's first book. I sent her an email thanking her for keeping me up half the night! I could NOT put the book down until I reached the end. And of course, instead of doing editing on my FireSong ARC like I'm supposed to be doing, I started Indefensible last night. LOL. LOVE her style - it's tight, fast paced, and some of the themes are just unthinkably scary...

And now just finished INDEFENSIBLE. WOW. This sequel is just as good as the first book, kept me riled up with adrenalin all evening until I reached the end. Incredible read!!