Ghosts & Messages from the Other Side 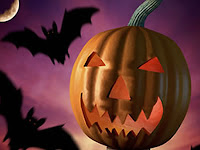 © Marta Stephens 2010 all rights reserved
It’s hard to explain what it’s like to see or sense a presence that shouldn’t be there. I’m not talking about the images that pop into your mind when you're trying to imagine a ghost or goblin. No, I’m talking about the prickly feeling that pulls at the hairs on the back of your neck and the cold chills that ripple up your spine without thought or provocation.

It’s that all too unsettling feeling that you’re not alone.

My story beings in the winter of 1988 when I was expecting our third child. Five years earlier, our eldest daughter, Nicole, passed away at 19 months due to a congenital heart condition. Months later I found out I was expecting again, our daughter Jessica. It was a heart-wrenching, bitter-sweet moment in our lives, but naturally we were thrilled beyond words on the day Jessica arrived to know she was a wonderfully healthy baby.

She quickly grew up into a happy, bright, and very active two-year old and all was well until she began to have night terrors. At first, I assumed she’d had a bad dream and tried to comfort her, but it soon became evident that we were dealing with something far more serious. Every night she would either let out a woeful cry or uncontrollable screams that would go on for hours. Exhausted, we turned to her pediatrician. Unfortuantley, he didn’t offer any helpful advice so I did what I thought was best. I used to rock her into the wee hours and tried to comfort her which I now know is the worst thing I could have done. Night terrors are similar to sleepwalking, but are more dramatic, and the best thing to do is to allow the child to get through them on their own. Oh, had I only known!  These terrors had gone on for months when I realized I was pregnant with our third child. On top of being sleep-deprived myself, the old anxiety from the loss of our first child began to well in me again.

One Saturday morning during my first trimester I was busy with the usual weekend chores on my mind. I came down the stairs and reached the landing. I had laundry to do and errands to run and all the while, was trying to keep both eyes on Jessica. I turned to go down the next set of steps that led into the living room and that's when I first saw our “translucent visitor.”

He was a man in his 30s or 40s leaning against the post at the bottom of the stairs. I couldn’t see his face, but I could feel his eyes on me and sensed his was a kind soul. Friendly or not, my first impulse was to ignore him in the hopes he'd go away. He, on the other hand, was persistent. From that day on, I saw him on a daily basis either by the fireplace or at the bottom of the stairs watching...always watching. He never spoke nor did I ever feel threatened by his presence. In fact, after a while it felt good having him around and christened him Ed. I sensed he was amused.

Finally, the baby’s delivery date arrived and after 2-3 hours in labor, we were again blessed with a beautiful baby boy we named Tracy after my husband’s grandfather.

Interestingly, Ed disappeared the day Tracy was born and as far as I know has never been back. That day also marked a change in Jessica who began to sleep through the night again without terrors. The two have always had a wonderful relationship--she smothered him with attention and he's always looked up to her. Today, they remain as close as (if you'll excuse the cliché) two peas in a pod.

I’ll always be curious to know who Ed was and what drew him to our home at that particular point in time. I like to think that he was watching over us. At any rate, the name stuck and to this day we attribute any strange noises in the house to Ed. Since then we’ve experienced other happenings (based on a true story) in our 97-year old home. I have no doubt that there are other beings among us, but whoever they are, they mean us no harm.
About the author:Marta Stephens writes mystery/suspense and the author of the Sam Harper Crime Mystery series.

Her books are available in paperback, Kindle, and e-book format online at Amazons, Barnes & Noble, Borders, Books-a-Million, Smashword, and Powells. For more information about Stephens and her writing, visit http://www.martastephens-author.com/.