The following review was written by literary scholar, Bob Williams, and published in CompulsiveReader.com. Although the actual virtual book tour for this fourth book in the LeGarde Mystery series isn't scheduled for a few months, you can now preorder the book at Barnes & Noble for a very nice discount, 25%. ;o) 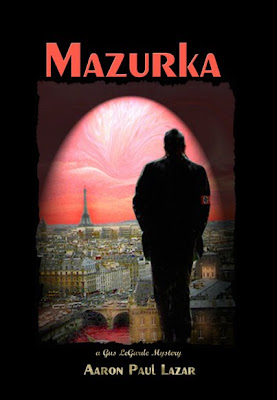 The highly prolific Aaron Paul Lazar has given us another treat, the fourth in his series concerning Gus LeGarde, a man to whom things happen. Back in Mazurka are the extended family and the loving descriptions of food and gardens.

But there is nothing bucolic in Mazurka. Gus and Camille – lovers in Double Forté and engaged in Upstaged – are now on their honeymoon in Europe. It’s an unusual honeymoon since Gus and Camille have taken with them Siegfried, the brother of Elsbeth who was Gus’s first wife and who died tragically about four years before the events of this story.

In Paris Gus and Siegfried encounter a leader of a neo-Nazi party. The occasion is a demonstration and the leader mistakes Siegfried, because of his Nordic good looks, for a likely recruit to the party. Siegfried angrily rejects the man’s overtures – he is, after all, part Jewish – there is a scuffle and a neo-Nazi thug, meaning to kill Siegfried, kills the leader instead. CNN presentation makes this unclear and the conviction is that Gus and Siegfried are guilty of the leader’s death. The Interpol officials know the truth but also are apprehensive that the neo-Nazis will attempt a reprisal. Siegfried, injured in the scuffle, is in the hospital. As soon as he can be moved, they will leave Paris as it is no longer safe.

Relying on a probability of security that proves mistaken, Gus and Camille visit the Catacombs of Paris. Neo-Nazi thugs recognize them and pursue them. Gus and Camille make their escape. Even though it is premature to move Siegfried, they leave Paris and make their way to the home of Elsbeth’s great-aunt.

It is there that Gus – a Chopin scholar – receives a shocking revelation concerning Chopin.
But their safety here as in Paris is an illusion. Disaster confronts them and they follow a downward path to danger and imminent death. These are colorful, if bloody, pages and it would be an act of cruelty for me to detail the crisis and its resolution. I give nothing away when I write that our hero triumphs but the way of that triumph is a pleasure best left to the reader.

Lazar is an excellent writer who has a good grasp of all that is necessary to tell an exciting story well. Each book adds to the reality of Gus’s world without more than token repetition of facts essential to the reader’s comprehension. There is none of the clumsy importations that mar so many series. It is appropriate that Gus is a musician for there is much in the Lazar series that suggest the musical theme and variations. Like the best examples of these, differences challenge identity and the resulting tension makes the work exciting. For the reader in want of entertainment there can be no better choice than the works of Aaron Paul Lazar.

More about Mazurka, including excerpts, can be found at http://www.twilighttimesbooks.com/Mazurka_ch1.html

About the Reviewer: Bob Williams is retired and lives in a small town with his wife, dogs and a cat. He has been collecting books all his life, and has done freelance writing, mostly on classical music. His principal interests are James Joyce, Jane Austen and Homer. His writings, two books and a number of short articles on Joyce, can be accessed at: http://www.grand-teton.com/service/Persons_Places
Posted by Aaron Paul Lazar at Saturday, July 11, 2009

Hooray! I love this one. So glad it's finally coming out! :-)

Currently reading Mazurka and love love love it! Will be providing my own review soon :)