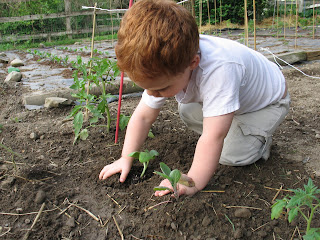 Hi, folks.
I've must admit I've been spending way too much time playing in the gardens with Julian and Gordon, and not thinking about what to write for my Sunday MB4 post. There's a little bit of guilt associated with this, but not too much. :o) I've thoroughly enjoyed my time with the boys (now five and six) and have therefore decided to repost an older piece. Thankfully, Gordie has now outgrown his asthma, and runs strong with the best of them.
- Aaron
copyright 2009, Aaron Paul Lazar
Sometimes I wonder what God is thinking. I know, I know. Life happens, people get sick, and it's all part of the crazy mixed up world we live in. But it's really tough when an innocent young boy is involved. Especially when it's my beloved grandson.
a
A rare new form of strep bacteria invaded Gordie’s baby lungs, aggravating his asthma. He wheezed, coughed, and fought to breathe. I know what that feels like, because I have asthma, too. I passed on the genes that cause it and struggle with the associated guilt.
a
Two-year-old Gordon has a sturdy build and curly copper hair. But when he lay inside the oxygen tent in his voluminous hospital gown, he looked frail. Tiny. The moisture coated the inside of the clear plastic walls of his tent and turned his hair into damp ringlets. I couldn’t look at the IV. The bloody spot beneath the layers of gauze made my stomach lurch, and the board they attached to it to keep him from bending his elbow made it worse.
a
For three days he stayed in the hospital with his parents in attendance, enduring six daily nebulizer treatments, slugs of massive antibiotics through IV, and the dreaded prednisone. Improvement was slow. Finally, after three long days, he came home.
a
Though still wheezing, Gordie ran from person to person and toy to toy–picking them up and playing as if he’d been away for a year. He jumped onto his tall fuzzy horse and cantered side by side with his three-year-old brother, Julian. He found his beloved turtle, and searched for his dinosaur–the one that looks like George’s dinosaur on “Peppa Pig,” his favorite cartoon. He also picked up a few bad habits–understandably so. When things didn’t go his way, he shrieked, “I don’ wannit!”
a
I chilled to think of the times he must’ve screamed those words to the nurses or doctors who hurt him while working so hard to keep his airways open. The only saving grace is he probably won’t remember the experience. He’s still laboring to breathe, but he’s home now.
a
This morning I choked up when he woke before the rest of the household and found his way up to my bed. I rubbed his peaches ‘n cream skin with the back of my hand and snuggled with him under the covers, thanking God for his recovery and delighting in the unparalleled pleasure of little arms circling my neck and soft little lips whispering secrets in my ear.
a
While Gordie was in the hospital, I stayed home from work to care for Julian. We visited Gordon and stayed in close touch; thankful he was in good hands. For the next four days, we spent time side by side. My grandsons and I were always very close, even though they’re only two and three years old. But this experience cemented our bond even tighter. Though we worried daily about Gordon throughout this ordeal, we also rejoiced in the gift of time together. My gardening buddy and I spent hours outdoors each day, from early morning until suppertime and sometimes beyond.
a
We planted a forty-foot triple row of onions and mulched beds with oat straw, watching bumblebees buzz around the flowers and listening to the symphonies of birdsongs each morning. We watched the progress of the peas, beets, lettuce and other seedlings as they sprouted and grew. The peas have over five leaves on each plant. We know. We counted.
a
Each morning, after breakfasting with Grandma, we’d march outside. Julian would say, “We have a lot of work to do today, Papa, don’t we?” I’d agree, listing our chores. We raked, chopped dead tree limbs, cultivated, and created most impressive burn piles. I continue to marvel at the intelligence of our little three and a half year old. Smart as a whip, he has a deep understanding of things around him, incessantly curious about the process of life. He uses words like “actually” and “absolutely” and makes me laugh when I realize how much like me he sounds. We both exulted in the therapeutic power of working hard together outdoors.
a
Worthwhile things take time to grow. With time, seedlings turn to plants, given sun, rain, and good soil. Baby lungs heal, provided time and medication. Worries diminish, after hours in the sun with a little boy. And life goes on, full of thanks to God for the safe return of our little Gordie.
Author's Bio:
Aaron Paul Lazar wasn’t always a mystery writer. It wasn’t until eight members of his family and friends died within five years that the urge to write became overwhelming. “When my father died, I lost it. I needed an outlet, and writing provided the kind of solace I couldn’t find elsewhere.”

Lazar created the Gus LeGarde mystery series, with the founding novel, DOUBLE FORTÉ (2004), a chilling winter mystery set in the Genesee Valley of upstate New York. Like Lazar’s father, protagonist Gus LeGarde is a classical music professor. Gus, a grandfather, gardener, chef, and nature lover, plays Chopin etudes to feed his soul and thinks of himself as a “Renaissance man caught in the 21st century.”

The creation of the series lent Lazar the comfort he sought, yet in the process, a new passion was unleashed. Obsessed with his parallel universe, he now lives, breathes, and dreams about his characters, and has written nine LeGarde mysteries in seven years. (UPSTAGED – 2005; TREMOLO:CRY OF THE LOON – 2007 Twilight Times Books; MAZURKA – 2009 Twilight Times Books, with more to come.)

One day while rototilling his gardens, Lazar unearthed a green cat’s eye marble, which prompted the new paranormal mystery series featuring Sam Moore, retired country doctor and zealous gardener. The green marble, a powerful talisman, connects all three of the books in the series, whisking Sam back in time to uncover his brother’s dreadful fate fifty years earlier. (HEALEY’S CAVE: A GREEN MARBLE MYSTERY, 2009; ONE POTATO, BLUE POTATO, 2010; FOR KEEPS, 2011) Lazar intends to continue both series.

“It seems as though every image ever impressed upon my brain finds its way into my work. Whether it’s the light dancing through stained-glass windows in a Parisian chapel, curly slate-green lichen covering a boulder at the edge of a pond in Maine, or hoarfrost dangling from a cherry tree branch in mid-winter, these images burrow into my memory cells. In time they bubble back, persistently itching, until they are poured out on the page.”

The author lives on a ridge overlooking the Genesee Valley in upstate New York with his wife, mother-in-law, and beloved Cavi-poo, Balto. Recent empty nesters, he and his wife are fixing up their 1811 antique home after twenty-five years of kid and puppy wear.

Lazar maintains several websites and blogs, is the Gather Saturday Writing Essential host, writes his monthly “Seedlings” columns for the Voice in the Dark literary journal and the Future Mystery Anthology Magazine. He has been published in Absolute Write as well as The Great Mystery and Suspense Magazine. See excerpts and reviews here:

Contact him at aaron.lazar@yahoo.com.
Posted by Aaron Paul Lazar at Sunday, July 19, 2009

I was not privileged enough to know my grandparents, Aaron, and to listen of your adoration of your g-kids makes me SO want to have some of my own!!

Oh, Kim. I wish you'd known them, too. Memories of my own grandparents are so precious. I lost them all over fourteen years ago, but I still ache to see and talk with them. I'll bet you would have been a WONDERFUL granddaughter. ;o) I pray you'll get the chance to experience this from the other side some day, when your children have children. It's a true blessing.

I never got to know any of my grandparents. How wonderful that you're sandwiched between grandparents and grandchildren. I can see why you want to take the family off.

Oh, I have been so remiss!! I've been meaning to tell you I read Mazurka, and loved it. Your feel for family comes through very strong in your writing.