Where Will Your Next "Great" Story Come From? 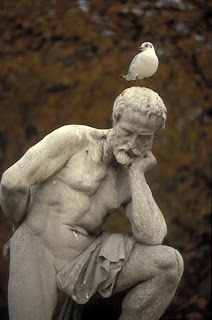 © Marta Stephens 2009 all rights reserved
I’d like to have a penny for every time someone has asked me where my story ideas come from. Unfortunately, there’s no secret formula writers use for gathering ideas that will lead to the tales (dark or otherwise) we weave. What we do have are well-developed, some may go as far as to say often overactive, imaginations.
I write mysteries and find what works for me is to begin by first identifying the crime. Then I consider the characters, their motives, and work backwards in order to help the character(s) solve the crime. Although ninety-eight percent of the writing is made up, a small part of me always seems to slip between the lines of my books so there’s something to be said for personal experience. But as far as the origin of the story itself, it’s as simple as asking, “What if…” Consider this, if every action causes a reaction what are the repercussions or consequences of the choices we allow our characters to make?
Let’s say our character’s name is Tom. Here are a few “what if” situations for him to consider and ideas to get the creative juices flowing.
What if …
1. Tom is walking down an alley alone late at night and finds a duffle bag among some over-grown weeds?
2. Tom is at a party and picks up the wrong cell phone and takes it home?

3. Tom is supposed to meet someone, but goes to the wrong address?

4. Tom hears strange noises coming from the apartment next door?

5. Tom moves into a home previously owned by a slum lord with enemies?

6. Tom misses his flight from (your home town) to L.A. and decides to take a bus instead?

7. Tom discovers his new work colleague/neighbor/girlfriend has a criminal past?

8. Tom is hiking through the woods when he hears a shot?

10. Tom overhears a conversation between two people in a coffee shop who are plotting a crime?


Poor Tom is just an accident waiting to happen, but hard choices and adversity are what make a story. Once you’ve developed your idea and begin plotting it, continue to ask “what if” and see where it takes you!


About the author:
Marta Stephens writes crime mystery/suspense. Her books are available online at familiar shops such as all the Amazons, Barnes & Noble, Borders, Books-a-Million, and Powells. Other locations include, but are not limited to those listed on her website.

Great little prompts, Marta! I so need some poking :)

Ah, poor Tom. But I do like your prompts.

I love the "what if" game! And I also love coming up with the worst, most horrible, torturous situations for my characters. Hee hee.

Well said, Marta! Nicely done. "Tom goes for a walk in his sleep and falls into a crater that opens up in a world he never knew existed..." Poor Tom! Super example of ways to prompt yourself. Thanks!