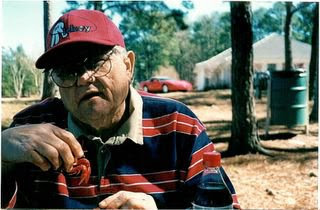 Publisher BeWrite Books, UK has announced the release of Lad Moore’s third collection of short stories. In this new book, rural Texas writer Lad Moore returns to spinning more East Texas area tales in a 240-page short-story collection, Riders of the Seven Hills. Many of his stories are adventures in rites of passage. Others surround the people who supply the character that so comes alive in his tales.

“The title says it all,” the writer explains. “Marshall Texas is famed as being the geographical host to the seven hills that surround it. Many local historians have compared the topographical oddity to the namesake seven hills of old Rome.

“These are the seven hills that I ‘rode’ in my adventures, seeking out tales I have heard and introducing some of the assorted characters that defined this very colorful area,” says Moore. “Around each hill, in each valley, there rested some legend, some lore. I tried to bring them to life as I witnessed them, or as I repeated and developed what I heard from others I met along the way.”

Moore adds that his publisher in the UK had a bit of squint in his eye over the author’s range of work. While many of the stories are true, some depend on imagination to fill in the blanks. The author says the discussion went something like this:

“Hey Lad, we can’t mix factual stories and partly-fictional stories the way you have. That’s not cricket.” I asked my publisher to trawl my stories again and point out where fiction and fact become blurred.

“You see,” Lad explained, “In East Texas there are three kinds of tales the long and the short and the tall. The long tale is for a quiet evening with family or around the stove in the dry goods store when there’s no big game on TV. The short tale sees you over a quick chilled beer with a passing stranger when the sun’s blistering and time’s a-pressin’. The tall tale is saved for when imagination adds vivid color to the sepia tints of real life and teller and listener have all the time it takes to wander the leafy lanes and dusty dirt roads of a shared yesterday.”

“I trust my intelligent reader to be able to tell the difference between the long and the short and the tall. Even more, I trust him and her not to really care too much of a hoot which is which.”

The publisher quickly agreed, and the result is this 35-story compilation that takes the reader along those trails that wind within, around, and among the seven hills.

To get a flavor of the style of stories that make up this book, read “The Papoose Men” online at the author’s website: http://laddiemoore.blogspot.com/

Lad Moore is a five-time contributor to Adams Media anthologies, and has authored three short story collections. He has been nominated to the Texas Institute of Letters, is a winner of the Raymond Carver Award, and has earned the Silver Quill Award. He has been published more than 500 times in print and online venues, including Chicken Soup for the Soul, Virginia Adversaria, Amarillo Bay, and The Pittsburgh Quarterly. As readers know, his work has also appeared frequently on East Texas Towns Online.

An East Texas native, Lad now resides on a small farm near the historic steamboat town of Jefferson, TX.

“Riders of the Seven Hills” is now available from the publisher on the BeWrite Books Bookshop. http://www.bewrite.net/merchant2/4.00/merchant.mv

It will soon be available at Powells, Barnes & Noble, and Books-A-Million. The author will have a limited number of books for signing and personalization. Pre-orders can also be sent directly to him at pogo@shreve.net
Posted by Marta Stephens at Friday, June 12, 2009

I'll go looking in Powells. Love that it's a UK publisher. And I love the long, the short and the tall. I'll remember that.

I read and adored both of Lad's first books - they are absolute GEMS of Americana Literature. I'm ordering this one right now. Congratulations, Lad!