Demons, Curses, and Other Weird Things That Haunt Us 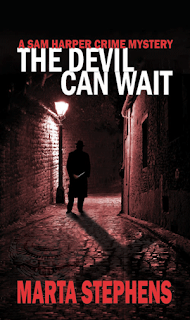 © Marta Stephens, 2008 all rights reserved
One fact few people know about me is that my paternal grandfather, Marcelo Ruggero, was a stage and film actor in Buenos Aires during the 1930s to the mid 1950s. He was a local sensation in his days. By the time I was born, he had long retired, but his stories lived on through my father. I was always particularly drawn to the tales about the strange things that often plagued the crew and actors during certain productions; illnesses, props disappearing, etc.

Actors often say they have to “get into character” in order to not only understand who they are trying to portray but also the character’s motivation. Immersing him- or herself into the role of the character is what ultimately brings the character to life on screen. As a writer, I understand this principle quite well. I talk to my characters more often than not, don’t you?

But what happens when the plot is not of this world? When demons play a supporting role and/or are the focus of attention? Recently, I was talking to a good friend of mine and retired journalist about some of the odd and unexplained things that happened after I submitted THE DEVIL CAN WAIT to my publisher. None of the incidents were life-threatening and individually, each could have easily been brushed off as coincidence. Still, something didn’t feel right and thus I decided to make a list and noticed a pattern begin to form. At every critical stage of production some unexplained occurrence caused a delay making me wonder if someone or something was trying to prevent the inevitable.

My friend listened intently and then had this interesting fact to share with me. “Years ago I was lucky enough to get together with Gregory Peck, Lee Remick and Billy Whitelaw at the close of filming for The Omen. They told me scary yarns about what went wrong on set – and even the destruction of a whole spool of key footage when a light plane was struck by lightning. It seemed Hell itself was on the job, doing all it could to put a spoiler on the famous 666 movie.”

It seems that in many ways I’m not alone, but for now, I'm content in knowing that I hold the winning hand because like it or not, THE DEVIL CAN WAIT will arrive on November 3, 2008, and Homicide Detective Sam Harper is again on the move against a formidable adversary.
* * *
You'll find the blurb, excerpt, updates, and reviews at http://www.martastephens-author.com/.
Marta Stephens writes crime mystery/suspense. SILENCED CRY is available online at familiar shops such as all the Amazons, Barnes & Noble, Borders, Books-a-Million, and Powells. Other locations include, but are not limited to those listed on her website. THE DEVIL CAN WAIT, BeWrite Books (UK) November 3, 2008
SILENCED CRY (2007)Honorable Mention, 2008 New York Book FestivalTop Ten, 2007 Preditors and Editors Reader Poll (mystery).
Posted by Marta Stephens at Wednesday, October 08, 2008

It's these spooky things that keep happening to you that make the launch of the book even more exciting, Marta! Wow. I'll be glad when it's finally out, and we can breathe easier!

Woo woo is fun--even if it makes chills go up and down your spine.

Aaron, you know it all too well, my friend! Why only last night ... well, I'll save that for another post. ;)

Hey Marilyn! Good of you to stop by. Yes, by golly, I'm anxious for you to read this one too. :()

The very interesting thing about writing this book was that Harper has to stay focus on the crime, the facts, and the evidence he will ultimately turn over to the courts. But still, there's this other thing going on that well ... makes for what I hope will be an entertaining story.

I keep hearing this strange music playing in the background whenever I get an email from you, Marta... sounds strangely like -- oh no. Could it be? hmm. i think it is. Yes, it is definitely The Exorcist. hugs!kim