Review for Tread Not on Me by R.C. Burdick 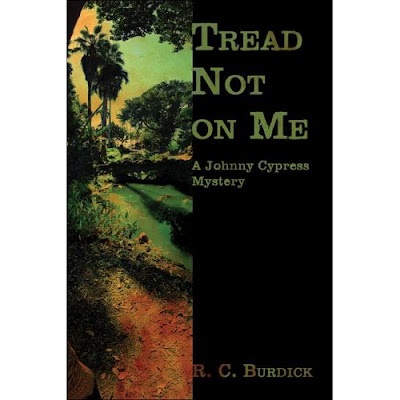 
Seminole Detective Johnny Cypress is at a crossroads. Fiancée Holly Canton, daughter of the local sheriff of Palmetto County, has asked him to retire from the force. As much as she loves him, she’s determined not to lose a second husband in the line of duty. Two years later, after several unsuccessful attempts to take down brutal drug lord, Carlos Santiago, Johnny capitulates and plans to devote the rest of his life to Holly and her thirteen-year-old son, Colin.

Life doesn’t cooperate, however, when Santiago stages a massacre on Sand Key, targeting Johnny. Holly and Colin are slaughtered in the crossfire. Johnny and his loyal police dog, Rex, are gravely wounded.

Enter Enola, the strong, steadfast Seminole nurse who rescues Johnny and Rex from certain death and secrets them off to a tribal village to recuperate. A natural beauty and empathetic spirit, Enola contributes to Johnny’s recovery with more than her knowledge of medicine. Armed with cunning tribal methods and the help of the village elder, Johnny struggles to beat the death sentence imposed by Santiago.

Meanwhile, something’s rotten in the sheriff’s office. No one knew about Johnny’s trip to Sand Key except the sheriff and his coworkers. Johnny suspects each in turn, until his investigative powers flush out the culprit responsible for leaking the information to Santiago and his band of killers. As he heals emotionally and physically, Johnny plots to take down Santiago’s empire. The climax is replete with tension and nail biting action – the perfect and righteous revenge.

There is much more to this riveting novel than a clever plot and magnetic characters. The prose is smooth and engaging, the dialogue is natural, and the sense of place is immediate. The Florida waterways come alive with gators, mosquitoes, buttonwood trees, exotic birds, and thousands of slow moving streams that snake beneath the mossy overhangs. It is with a sense of acute nostalgia combined with satisfaction that the reader turns the last page. Burdick possesses a rare talent – and is my new favorite writer. This book, much like its predecessor, The Margaret Ellen, A Karen Cobia Mystery, lingers in ones life for days after completion, leaving only one question to be answered. When will the next Burdick book be released?
***

Ah! Another classic Lazar review! Sounds like a great book with a riveting, page-turning plot. Thanks so much for posting this.

Totally intrigued by this review, Aaron! thanks for sharing it and for sharing the link on how to get mine!

Thanks, Marta and Kim! This book was a pleasure to read - only problem was I was left wanting more, and I'd already read all of RC's books! I'm waiting with bated breath for the next one. ;o)