Are You Getting the Psychology Right in Your Fiction? 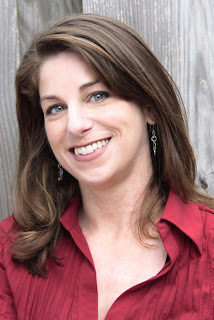 © Carolyn Kaufman, PsyD 2010 all rights reserved
If you write novels, there’s a good chance you also know how important it is to do research. If you write thrillers, crime or suspense novels, or mysteries, you’re probably darn good at researching things like police procedure and forensic medicine. You know you need to do research, because you probably don’t work in those fields. 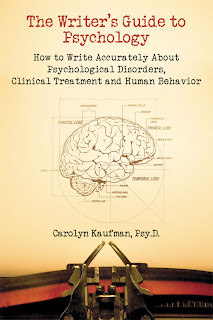 What you may not realize is how important it is to also research those psychological “facts” you may take for granted – because much of what we’ve learned from books, television, and the movies is inaccurate. Here are a couple of the biggest danger zones and how to avoid them.

The Not Guilty By Reason of Insanity Plea

Fictional police and detectives often worry or complain about characters they’ve hunted “getting off” thanks to a Not Guilty By Reason of Insanity (NGRI) plea. The implication is always that NGRI is a common – and commonly successful – approach and, worse, that criminals who are declared NGRI either go home or head off to some resort-like institution.

In reality, NGRI is not a common plea, and even when it’s used, it’s successful less than 1 percent of the time. Partly because juries believe the same things so many writers do – that NGRI is a Get Out of Jail Free card – they’re loathe to allow it, sometimes even when the situation warrants it.

Many states use the M’Naghten Rule to determine NGRI. The M’Naghten Rule states that the defendant must know what he is doing and that it is wrong at the time he is doing it. Pretty basic. But someone who is in the throes of a psychotic state – that is, someone who is seeing, hearing, or believing things firmly based outside of reality – may not realize that what he’s doing is wrong. Is it still wrong? Absolutely. But did he understand that while he was committing the crime, if he understood what he was doing at all? If not, he should be declared NGRI.

Do realize that when defendants are declared NGRI, that declaration may only be temporary; in other words, the individual may be viewed as “restorable” with appropriate treatments, which may include time, abstinence from drugs and alcohol, therapy, and/or medication.

In the rare situation that a defendant is concluded to be “unrestorable,” he is probably looking at the rest of his life in a state institution that’s no more comfortable than prison.

Another common mistake writers make is to declare their villain “insane,” “crazy,” or “mentally ill” without any attempt to define exactly which disorder said villain has. Or worse, as in the film The Cell, they pick a diagnosis out of the air and then fail to show any real symptoms of that disorder.

Let’s look at the terms “insane,” “crazy,” and “mentally ill” one by one: “Insane” is a legal term, not a psychological term, so avoid it unless the psychologist in your story is a forensics expert who’s making a NGRI-type of declaration for the courts. “Crazy,” as you can imagine, is a colloquialism, so it has no clinical meaning. And “mentally ill” is rarely used; instead, it’s best to use a given disorder name.

So which diagnosis should your villain have?

Psychopathy is always a good bet, and psychopathy is probably the single best diagnostic predictor of future violence. Psychopaths flagrantly violate others’ rights without any remorse. They’re glib, superficial, grandiose liars who harm, mutilate, or murder others at a whim. They’re the Hannibal Lecters of the world, the Jokers, the Jigsaws. But – and this is crucial – they are completely sane. Psychopaths are rarely, if ever, psychotic.

Another possibility? Someone who really is psychotic, and –very important – is also suffering from threat/control override symptoms (TCOs). TCOs are a specific type of delusion (psychotic thought) in which the individual believes someone is trying to control his mind or otherwise hurt him. The difficult thing about psychosis is that it’s usually accompanied by other irrational behavior – it’s not smooth and cold and calculated the way psychopathy is. In other words, it’s hard for people who are psychotic not to get caught – people notice they’re acting strange.

There are certainly other disorders you can use – psychology’s “bible,” the Diagnostic and Statistical Manual of Mental Disorders (DSM) contains over 300 – but choose one only when you’re going to be able to depict it consistently and accurately. Remember, modern readers are getting more savvy about psychological problems, and less tolerant of mistakes.

About the author
Need more information on psychology for your story? Carolyn Kaufman, PsyD, is a clinical psychologist, a writing coach, and the author of THE WRITER’S GUIDE TO PSYCHOLOGY: How to Write Accurately About Psychological Disorders, Clinical Treatment and Human Behavior. You can find out more about the book at Amazon or on the book’s website, http://www.writersguidetopsychology.com/, which includes the media kit and a detailed table of contents.
Posted by Marta Stephens at Friday, December 10, 2010

Careful about that 'Y'! Psychopathy is ANY mental illness, where a psychopath is a type of antisocial personality disorder that is INDEED a scary villain (though hard to identify with--they lack the ability to understand normal human emotion, so they are more often 'straight evil' as opposed to a villain we can identify with a bit. I did a post this week on villains and looked at psychopaths and sociopaths (sociopaths being less able to hide it, but very similar otherwise).

And then there is what we THINK OF as crazy (hearing voices, seeing things)--psychotic symptoms.

Sorry... I LOVE this topic and so managed to run off at the finger-tips. I feel like it's my primary writing advantage--a psych background...

Actually, psychopathy refers to psychopathic behavior. I think you're thinking of "psychopathology" when you say "any mental illness."

Sociopaths, according to leading researchers like Robert Hare, are people who have typically acquired the behaviors, where as psychopathy itself is thought to have at least some biological etiology.

Very interesting conversation above, ladies. I love this topic, as well, and enjoyed hearing Carolyn's descriptions.

When my wife was being incorrectly diagnosed (for over two decades) with every psychological disorder known to man (Well, it seemed that way...), we did lots of research and knew the diagnoses didn't fit. Her problem ended up being in the brain, indeed, but a different kind of organic problem - multiple sclerosis. Depending on where those brain lesions end up, on which bundle of nerves or which part of the brain, it can mimic lots of other disorders. Until the physical data comes in later that finally provides the proof (MRIs, for example). I also have a daughter with bipolar who is NOTHING like the bipolar folks you hear about in Hollywood or on the news. She's quite sweet and loving, would never harm a mouse, but suffers greatly from excessive emotions and mood swings. It's hard when you see Hollywood's villains being portrayed so inaccurately, and it encourages prejudice, too.

Carolyn, thank you for joining us today. Great article!

Great post, Carolyn. What's so strange is someone this very morning recommended your book. I don't believe in coincidence, so I'm definitely checking it out. I've got one protagonist, a criminal investigator, who's recently a widower. Although I've spent several years getting to know him, a little help would be great. My other protagonist is actually easier to write; she's a battered woman who is criminally insane. My book is about their growing relationship. Sounds like I could use your book, Carolyn. Thanks, Marta!

Wow, Aaron, it sounds like you and your wife really had a lot of trials to deal with. I've heard other people struggle with the same thing, and I am hopeful that clinicians have gotten better at diagnosing as we've learned more about the biological aspects of disorders. That having been said, I confess I'm a little anxious about the DSM-5 coming out -- there's some disturbing evidence that big pharma may be behind many of the changes, and that's definitely not who should be driving diagnosis.

I also agree that bipolar disorder is so often misrepresented in the media, and therefore misunderstood. Mood disorders are an area of particular interest to me, and I enjoyed the opportunity to set the record straight on that -- as well as many other misconceptions -- in The Writer's Guide to Psychology.

Joylene -- thanks so much for your comment. I'm so pleased to hear that my book originally came to your attention by word of mouth. I hope you'll find it helpful in your writing, and that you'll have the chance to pass on the recommendation! :)