Original Ideas: Do they exist? 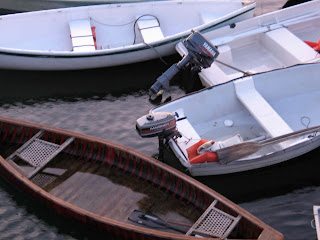 
Have you heard the news? Apparently, there are no original ideas left in this great big old world of ours. Some say that no matter how hard you try to create something new, it's been done before.

When you step back and look at major themes, it's probably true. But don't let that deter you - because even if you're writing a Gone-With-The-Wind type saga, the characters, scene painting, and dialog are all yours. And that's something nobody can take away from you.

As a matter of fact, there are many creative minds out there, and I've run into the "hey, that was my idea!" situation several times, especially when it comes to book titles. Sometimes it lets the air out of your tires and can be incredibly frustrating. The only sensible reaction, however, is to realize that "great minds think alike" and be glad you're among them.

I originally entitled the fifth book in the LeGarde Series And Nature Sings, because nature goes crazy in this book with a tornado, forest fire, a flooded underground salt mine. In this series, I try to use a musical or theatrical reference in my titles, and since the book includes a scene where the local minister is trying out the new church organ, playing Christmas carols, I thought And Nature Sings would tie in fairly well. Of course, I went through tons of hymns to find something that referred to nature, etc. before settling on what I thought was the last few words of Joy to the World.

One of my beta readers reviewed an early version of the book, and mentioned that if I was referring to the lyrics in Joy to the World, the actual quote was And Nature Sing ("...and Heaven, and Heaven, and nature sing.")

Well, that took the wind out of my sails. And Nature Sing sounded like a pretty dumb title, so I started searching for a replacement.

My usual process when picking a title is to list the themes of the work, then start brainstorming off of the ideas with anything and everything that comes to mind. Single words, phrases, common sayings, lyrics, all are fair game.

After spending many hours listing the major and minor themes in the book, I came up with Firesong. I was pretty pleased with myself after making up this neat compound word. It combined the epic fire that nearly killed off my protagonist, his best friend, and his grandson, and linked to another theme which included an enslaved man singing hymns in the tunnels from the old salt mine. I figured Firesong was unique and completely mine. I added a subtitle, so the new work became, Firesong: an unholy grave, since a most unholy discovery is made beneath Gus's country church.

After I'd finally honed the title to something I felt proud of, I did my usual search on Amazon to make sure no one else had used the title. 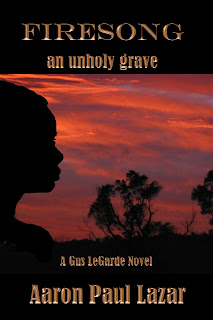 That's when my ego took a blow. Firesong was coined long before I "invented" it, and was used in several titles already. Crushed, I finally accepted that maybe there really weren't any original ideas, and that my subtitle would have to make my book stand out from the others. Also, lots of books have the same titles - there are no copyrights on book or movie titles, only on the content.

I spent a long time working on the cover image, too, hopeful that my publisher would like the design. I'm still not sure of the fonts, those will likely change. But I wonder if I did an image search if I'd find something just like this? I sure hope not, since it was made from my original photography and photoshopped by yours truly.

Since I wrote this book, I've had a similar experience with other books and their titles. I've grown to accept that my most original ideas may have been thought of by other creative minds, and that there's nothing I can do about it, but accept it. After all, no matter what the book title, nobody will have recreated the same words that are bound within the covers. Those will be always and uniquely be my own ;o)


(Firesong is scheduled to be released through Twilight Times Books late in 2010.)
Posted by Aaron Paul Lazar at Sunday, December 06, 2009

Aaron, do you remember all I went through before coming up with the title to my second book, "The Devil Can Wait?"

The focus of the book is a stolen black pearl ring that some believe give the owner powers and think nothing of killing for it. From the day I first penned it back in 2004-05, I always referred to it as "The Black Pearl."

Then came Johnny Depp and his Black Pearl ship. I got tired of people asking me if my book was about a pirate ship (even though I wrote it years before the movie came out), so I changed it at the last minuted before it went to print. Yeah, that close!!

Do I ever, Marta! That was fun. I actually enjoy that process (with my books and others) a great deal. It was so much fun when you came up with "The Devil Can Wait." I remember when I told you that title jumped right out at me from your list, and you had already singled it out as your favorite. I still love that title, because it makes me think of Sam Harper thumbing his nose at that proverbial old devil!

Ah, yes, titles. The occasional bane of my existence. :-) It's true that most of the title possibilities have been used (after all, there have been a million novels written! LOL) - but it all comes down to what works for your book.

I love the title Firesong. :-)

First congrats on Firesong coming soon! And second, the cover is AWESOME!!