A Place for Us 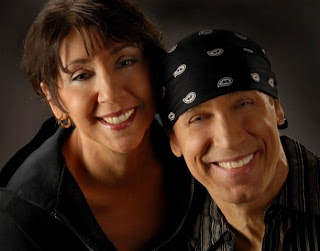 © Allyson Roy 2009 all rights reserved
Allyson Roy translates as Alice and Roy, husband and wife collaborating authors and winners of a 2009 Daphne du Maurier Award for Excellence in Mystery/Suspense.
Their Saylor Oz mysteries combine gritty, urban suspense with wacky, over-the-top comedy and a dash of romance in a style they call Madcap Noir. Their second book in the series, BABYDOLL, came out on August 4th.
*** 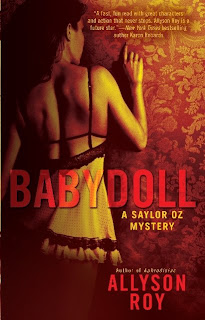 Choosing a setting is a big decision for an author, especially if you’re writing a series.
Sometimes it’s a matter of using the town you’re living in, which of course makes research that much easier. Sometimes it’s an excuse for a trip to a place you’ve always wanted to go. I think it was the late Phyllis A. Whitney, who said she loved sending away for travel brochures about exotic places where she could set her stories.

With our backgrounds in the arts -- Roy in theater, painting and stand-up comedy, Alice in dance -- we spent many gypsy years living in the different neighborhoods of Philadelphia and New York City. And when the regular cast of characters for our Saylor Oz mysteries came to life, we decided the perfect choice would be the Brooklyn waterfront neighborhood of DUMBO (down under the Manhattan Bridge Overpass).

For one thing, it has Gleason’s, the famous boxing gym. Since Roy is a devoted boxing fan we wanted to use that milieu as part of Saylor’s world. Her best friend and sleuthing sidekick, Benita Morales, is a professional female boxer as well as an obsessively frugal financial analyst. Then there’s trainer Jaleel Thomas and Saylor’s off-again, on-again heartthrob, middleweight turned hi-rise window washer, Eldridge Mace.

Because DUMBO was a warehouse and manufacturing district in the late 1800’s through the turn of the century, it still has the feel of its industrial, shipping industry past. But it is now combined with a hip, sophisticated community. Many of the buildings have been converted into expensive lofts, yet the neighborhood has a large contingent of artists and rock musicians and people who do things a little differently. Like Saylor’s rich Aunt Lana, a Naturist, who can’t see why anyone would want to wear clothes.

Best of all DUMBO has a beautiful noir atmosphere that makes it an ideal setting for a crime novel; subway trains rumbling overhead along the underbelly of the Manhattan Bridge, the lights of the bridge reflecting in the East River at night, and the Manhattan skyline across the dark water, and the canyon-like feel of narrow, Belgian brick cobbled streets surrounded by giant warehouses.

Just the place for our tiny heroine to find herself walking home alone after a modern dance concert, mellow on wine . . . and totally unaware that she’s being followed.

We’ve got some pics of DUMBO on our Behind the Series page at our website. Come check it out at http://www.allysonroy.com

Many thanks to the authors of MURDER BY 4 for hosting us today.
Posted by Marta Stephens at Friday, August 07, 2009

Heading over to look at the pictures. Fascinating.

It was well worth heading over there. Enjoyed the site.

Okay, this is bizarre, but you two look so extremely familiar to me. I swear I know you...

Anyway - thanks so much for coming by, and for the excellent post. Your books sound like a lot of fun!

Thanks for being on Murderby4. I think your books sound outstanding!

Wonderful piece. Thanks so much for joining us today! I'm off to take a look at Baby Doll and your site right now. ;o)

Sorry we got her so late. When we checked earlier their were no comments. Thanks, Sheila for taking the time to go to our website. Thanks, S.W., Kim and Aaron for having us today. S.W., maybe we've met somewhere. Are you from Philadelphia or New York City?