If I Tell You ... Marketing 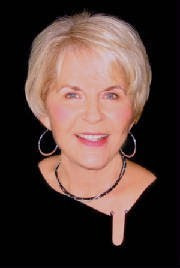 © Sylvia Dickey Smith 2009 all rights reserved
If I tell you a hen dips snuff, you better look under her tongue! The same goes if I tell you book promotion can be fun.
We writers can obsess and stress about marketing. Likely that’s because selling or not selling books affect whether or not we get another book contract. But don’t let that scare you away from a new way of approaching the activity.
One day I reminded myself that life is way too short and writing is way too much fun to allow marketing to leave me feeling negative about it. So, by an act of my will, I reframed the process and ran smack into the law of attraction. When we have fun we attract people to us.
Now I create enjoyable ways to market my books and set up activities that make me laugh. For example: I just spent four days in Orange, a southeast Texas town with a population of 18,000, launching my latest book, DEAD WRECKONING. I had tons of fun and sold 150 books during those four events, 74 of which sold in one day. My protagonist in the book started making pickles so I made a few dozen jars, affixed a cute label and took them there to sell along with my books. The pickles themselves led folks over to my table. One man bought a jar of them just because he loved the label. Folks who bought the whole series received a free jar wrapped in colorful tissue 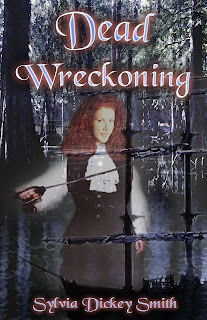 paper and stuffed into a white paper bag. Customers walked off with smiles on their faces.
It’s only fair to mention my sister lives in Orange and knows everyone in town—not literally, but almost! I always take her to handle my cash box. Plus, she draws people to her like my fair skin draws mosquitoes. People see her, come over to chat, and she introduces me and tells them about my wonderful book! I almost had to tie her to the chair to keep her from dashing back to a nice warm car when the wind gusts got up to 35-45 miles per hour and the chill factor froze our bones, but folks started coming despite the weather and bought a record number of books. Talk about fun! So…if you want to rent out my sister…
Also, there is something to be said about regional mysteries, and that something is excitement. Fascinated by a mystery series set in their town, Orangites love reading a novel that features locations and sites they recognize. They seek me out to do events in their places of business and buy advertising for the events. I made friends with a couple of local newspaper reporters who have been helpful in letting folks know when I am in town. Three different papers ran articles and photos of me and my upcoming events. Many folks came by my tent and said, "Oh yes, this is the book I read about in the paper." They have talked about the books so much that news of the series has traveled all the way to England and Australia.
I have signed books in coffee shops, antique stores, and boutique wine shops while an Elvis impersonator sang, at art events, a Chamber of Commerce, libraries, a pharmacy, a Mardi Gras celebration, a Crawfish Boil, anywhere someone will let me set up a table. I always offer something for the customer, such as a live band playing great music, wine and cheese, alligator cut-out cookies, sandwiches, coffee, and even a sample of Sidra Smart’s new Sassy Pickles. I am speaking at Friends of the Library event soon. Following the theme of my latest book which features the ghost of Jean Lafitte and fictional female pirate Mary Anne Radcliff, I will dress in pirate costume, offer a treasure chest overflowing with gold-wrapped candy, have a couple of alligators (not live!) sitting on the table plus a pirate hat and knife, and a skull and crossbones banner.
Now, I don’t mean to mislead you. There have been events where I sold zero books, but if I find myself in such a situation, I’ve learned to turn the event into fun. I challenge myself to see how many people I can engage in conversation and then delight in the experience of making a new friend even if we never see each other again. It’s sort of like paying joy forward. Sometimes the person may end up buying my book and sometimes they don’t. But I’m a winner either way.
So remember this. If I tell you a hen dips snuff, you better look under her tongue.
***
About the author:
Born in Orange, Texas, Sylvia Dickey Smith entered this world backwards—feet first and left-handed—and says she’s done most things backward ever since.

At seventeen, she married a local boy and became the “pastor’s wife” while still a senior at Stark High School. After graduation, the two moved to Fort Worth where he attended seminary, and then later, to several small Texas towns where he pastored local Baptist churches. After being appointed as foreign missionaries to the Caribbean island of Trinidad, they lived and worked there for six years before returning to the U.S, and settling in El Paso, Texas.

At 41 Sylvia took her first freshman class at the University of Texas at El Paso and fought her way to a BA in Sociology and a Masters in Educational Psychology, all while rearing four children, being a pastor’s wife, and a foreign missionary.

After graduation, her life took a different turn. She struck out on her own and began a career as a single mother working with non-profit and for-profit organizations within the human services field, and conducting private practice as a licensed professional counselor and marriage and family therapist.

Several years later, she married a retired Army Colonel, and they eventually relocated to the central Texas area where she continued employment within the human services field. After retirement, she took on the challenge to write a mystery novel.

After she decided to set her mystery series in Orange, she conducted research on the area and found a rich history she’d never known existed. She discovered a fascinating county full of folks from all walks of life, and of all color, each with an iron strength and determination. She also developed a new sense of awe and respect for the meandering Sabine and Neches Rivers, once plied by Paleo-Indians, pirate schooners, steamboat captains, Confederate Cottonclads, and then WW II Destroyers.

The result of this research inspired her to weave the past with the present in her mystery series with Sidra Smart and the Third Eye detective agency. Books in the series published so far are Dance On His Grave, Deadly Sins Deadly Secrets, and Dead Wreckoning. She recently completed a historical fiction called A War of Her Own, not yet published.

I love this post. As you know, marketing is my thing but this woman is so full of great new ideas! Take along a jar of pickles and a sister, lol. I love it. But it does make you think that there might be ways you might be sabotaging sales if you don't go the extra nine yards. Fantastic blog post!

Your book signings sound like fun. It seems you enjoy yourself no matter how many books you sell. What a wonderful attitude.

Loved this post. Anything you do you can turn into fun. I've had some real duds when it came to book signings, but I've also had some glorious ones.

Hubby is my money taker and we always enjoy seeing the places we go to talk about and sell my books.

Wow, you are having a blast! How creative! Glad to hear of unconventional marketing methods that work out so well. :-)

What wonderful ideas! And without a doubt, your positive attitude is a major factor.

Thanks for the compliments! Yes, I've had some duds too, but I make up my mind to have fun regardless of whether or not people buy books. I enjoy chatting with them, anyway. Last Saturday I signed at Barnes & Noble in Beaumont, Texas. Since book four has two pirate ghosts who show up to help solve the case, I dressed in costume, took a pirate banner and spread it across the table, filled a treasure chest full of miniature gold wrapped Snickers and sold a couple of dozen books. I invited folks to have a Snickers where they were interested in the books or not! One guy came up and said he didn't read mystery and ended up buy two complete sets of three books. You just never can tell when you start out talking to someone.

I had a pirate sword and the head of a small alligator I put on the table at times, but figured B & N wasn't the best place to put those! LOL

It's funny to see the look on people's faces when I pull out my "Police Line Do Not Cross" yellow tape and drap it all over the table. Props like that draws the eye and that's all I need to start a conversation. ;)

Great having you here, Sylvia! Thanks for your post.

It was great fun being with you all today! Thanks for the comments.