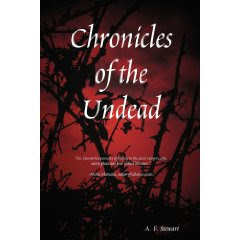 “Chronicles of the Undead” transports the reader into the realm of London vampires between the years of 1793 and 1826. Written in diary format, author A. F. Stewart masterfully reveals the quest of three generations of the Harrington family to record their interactions with the undead.

Samuel Harrington begins the diary entries on April 26, 1793, when new neighbors move in. Upon meeting Henri Forain and his cousin, Eleanor de Burgh, Samuel immediately strikes a friendship with Henri. Their relationship is forged by the number of common interests they share. It begins as an enjoyable encounter, but when Samuel discovers certain truths about his new friend, the situation takes a turn.

Samuel descends into a darker, far more sinister realm than he thought imaginable. Too enthralled by his new knowledge, he discards the things he has held dear throughout his life and begins a new evil existence. It isn’t long before Samuel pulls those he formally loved most into his menacing acts as unwilling victims.

Samuel’s son, Edmund and later Edmunds’ daughter Charlotte take up the quest to stop the evil that has destroyed their family.

Without one line of dialogue, and with an exquisite command of the written word, Stewart has created memorable, well-rounded, developed characters and has painted an intriguing and highly entertaining dark tale that kept this reader turning one page after another. “Chronicles of the Undead” is akin to “Interview with a Vampire” in its classy depiction of vampires and the twists and turns that influence the characters’ lives.

When the writing shines as is the case of A. F. Stewart, genre is never an issue. Whether you enjoy fantasy or not, “Chronicles of the Undead” is a must read and is guaranteed to hold the reader’s attention from the innocent beginning to its deadly end. I definitely look forward to more from author A. F. Stewart.

Sounds like something I would totally enjoy, when I find the time, I will have to pick this up.
Thanks for sharing!

One line dialogue. wow! I don't care for vampire books yet this one sounds like a grabber. Thanks for sharing
Jo Ann Hernandez
http://bronzeword.wordpress.com

I normally don't read fantasy and with the influx of vampire gore I’ve stayed away from it as well, but you're going to love her voice. It's a short, read-in-one sitting book.

I enjoyed Anne Rice's Interview with a Vampire, but there was dialog in the book as well as narrative.

Chronicles of the Undead sounds like an interesting read. Thanks for sharing this. :-)

Sounds totally delicious! I am intrigued by the fact that she uses no dialogue. This will be fantastic!

Great review, Marta! This looks right up my alley.