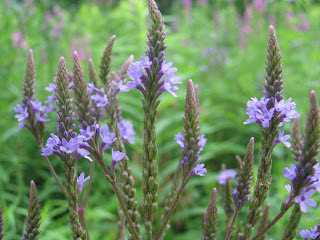 Ephemeral blue.
Frayed feathers frame yellow eyes.
Are you really there?
This week I had the opportunity to resume my lunch walks. Aside from getting drenched on one walk -- and I mean wringing, dripping, soaking wet -- I was able to get away from the office for an hour or two each time. Chalk it up to making up for numerous skipped lunches. I was due. Overdue. So I took advantage of these late July days that hovered in the low eighties to change into my shorts and tee shirt and get outside.
On Tuesday, I ran into a blue heron. Almost literally. Quite opposite to any bird behavior I'd ever seen, he stood just ten feet from me on the trail - simply staring with round yellow eyes.
I walked closer, scuffing my feet.
Why doesn't he fly away? Can't he hear me?
a
I scraped my sneakers against the gravel again. He slowly turned his feathered head and looked at me. Right at me.
"What are you doing here?" I asked.
He continued to stare, his eyes the color of Black-eyed Susan petals. I stepped a little closer and took a dozen photos with my camera phone. Oh, the quality is terrible, but I captured at least a faint image of him. I meant to bring my camera that day.

He stood regal and aloof. His gray blue plummage seemed healthy, full. He stepped with confidence, swinging his head slowly from side to side.
I spoke to him, again.
"Aren't you afraid of me? Why don't you fly away?"
I moved closer, but he only walked a step or two along the path, as if keeping pace with me.
"Are you ill? Do you have a nest around here?"
I didn't dare move any closer, since his beak looked long and sharp. Instead, I took a path into a pumpkin field and marched along until I hit the woods. On the return trip, I looked for him, but the bird had vanished. Relief whooshed through me.
He must be okay.
My mind started to spiral.
Was it a sign? Was this rare and close encounter perhaps my father's spirit, come to visit?
It's been ten years, but I still long for my father's company. I imagine conversations with him. Okay, let's face it. I hold conversations with him. I know he listens, and I often sense his presence. At risk of embarrassing myself, I will admit that I love letting my mind wander in these preposterous ways, even though I know deep down it's farfetched. But walks alone in nature tend to foster such thoughts in me, and I enjoy the fantasies. Not that I'd admit that out loud to anyone. (Except you, of course.)
Today I returned to the trail, camera in hand, hoping to see my friend.I found him, but not as I had hoped. The poor bird lay on the trail, curled and still.
It saddened me. A lot. I considered taking his picture, walked past him, covered another hour of dirt roads, and returned.
Should I? Wouldn't it be disgusting? Gross? Crass?
But I did take his photo,and it was almost a reverent thing. Because even in death, his form held beauty and elegance. 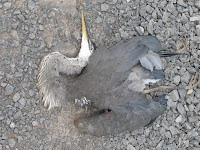 In a very strange way, it was almost like closure.
In my usual self comforting ritual, I started to imagine that perhaps this was a wise old bird whose time had simply come. Perhaps he'd led a full and resplendant life, soaring over lakes and swooping down to skim the water with his feet. Perhaps he'd caught a thousand silvery fish, balancing on long spindly legs while catching his handsome reflection in the mirror surface of the creek.
So how fortunate was I, to have been graced with his startling presence in his last days on earth? I'd been blessed to have met this feathered friend, in spite of his untimely demise.

***
Here are a few shots I took on the walk today. 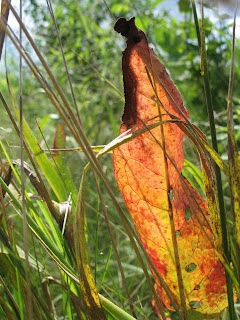 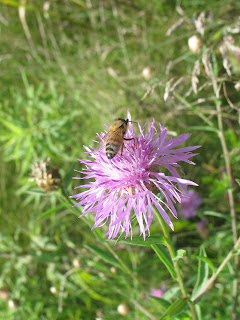 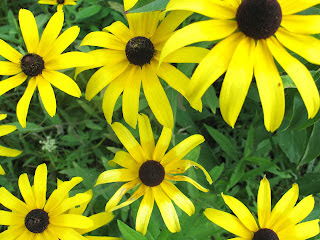 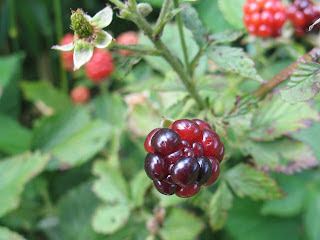 Wow! A two-hour lunch! Must be nice. Sad about that blue heron. They're so pretty. They nest along the river here in town too.

Thanks for taking us on a walk!

Yeah, but only after weeks of working through lunch. So it all works out in the wash. I've learned that if I don't take my comp time when its due, that it will never happen. You know?

ahh... thanks Aaron for sharing these intimate moments with your readers. I feel as though I have been transported. The pics are awesome!

What a wonderful piece. You give so much of yourself in these articles, Aaron. It's endearing to say the least. This one was particularly tender.

Thanks, Kim. You're welcome on my walks anytime. I've lost my lunch walking partners due to one job change after another (for them), so the position is open!

Joylene, thank you. Glad you enjoyed it. ;o)

Aaron, this is a beautiful post - and those pictures are so striking. There is something profound in the difference of color between the heron as you saw him live, and then in death. I can't quite articulate it, but I can see it and feel it.

Thank you for posting this.

Thanks, S.W. I know what you mean about the color - the blue is so much stronger in the "alive" photo. I had chalked it up to my camera phone vs. digital camera, but maybe there's more to it...