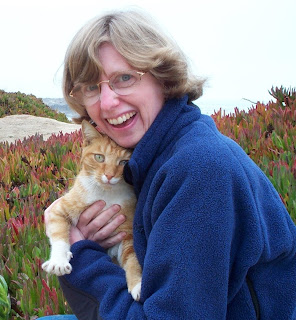 A breakfast table discussion and unscientific taste test ~ Try these at home ~ they’re safe! Plus, an exciting bonus feature for chocolate lovers!

Are mysteries, like chocolate, the darker the better? Medical and nutritional studies in recent years convince me of dark chocolate’s health benefits (see below for links to study reports.) But how many people actually prefer dark chocolate? And what about mysteries of the noir persuasion? Are readers more captivated by stories digging into a character’s psyche than the cozy world of knit one, perl two, and the daily grind of cat-loving baristas? Curious, I set out for the wilds of Indiana, in October last year, to find out. 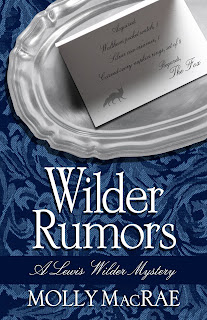 Strategy: sit quietly and wait for the unsuspecting. And wait. And wait. . .

Do you know how hard it is to get people to eat chocolate at seven a.m.? Eventually, six people did join me, possibly because I looked lonely or harmless.

Of the seven now sitting at the table, three demurred but four (including Marta Stephens of Murder by 4) acquiesced and ate the chocolate. The samples ranged from a namby-pamby 40% cocoa content (basic milk chocolate) to an invigorating 85% cocoa. To prevent bias, the samples were unlabeled. After tasting all four, subjects voted on their preferences, though one cheated and voted twice (that was me.) The following graph shows the results:

Even accounting for the cheater, who voted for both 71% and 85% cocoa, three out of four people preferred dark over milk chocolate in this blind and completely reliable taste test – a resounding endorsement. But what of dark mysteries? Are they also so clearly preferred?

Having gained the trust of my tablemates by speaking softly and using only non-threatening gestures, not to mention plying them with chocolate, I next asked them to define “dark mystery” and encouraged them to share their feelings about the genre. The gist of that exchange can be summarized in four bullet points. (Opinions stated are not necessarily those of this researcher.)

´ Dark mysteries troll the baser instincts.
´ Dark mysteries are more authentic and morally complex than cozies.
´ They are not necessarily graphic, but are harsher, grittier, and have a strong sense of violence.
´ Humor and a happy or satisfying ending are possible, though cynicism abounds.

The discussion was interesting and friendly. Participants variously sipped coffee, tea, or juice and enjoyed warm muffins and bagels from the breakfast buffet. Though opinions differed, no one resorted to harsh or gritty language. No one pulled a machete or gun. Cautiously, so as not to disrupt this cozy atmosphere, I asked for a show of hands. How many preferred dark mysteries? The results are seen in the following pie chart. 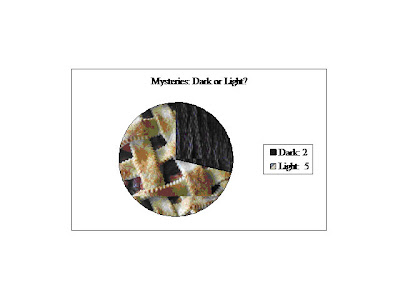 I had two final questions for the group before letting them dash off to the first panel sessions of the day. How dark is dark enough? And how dark is too dark? With very little further discussion they decided mysteries can be as dark as you want, as long as there is redemption at the end, but for either mysteries or chocolate, when they are too dark they become unpalatable.

So, there are the results of my study, not earth shaking by any measure, but as satisfying to me as a square of Ghirardelli’s new Intense Dark® Midnight Reverie® 86% cacao chocolate. And, speaking of Ghirardelli’s, at the beginning of this piece I promised an exciting bonus feature for chocolate lovers. Here it is – your chance to win a luxury trip for two to the Ghirardelli Chocolate Festival in San Francisco! Click here http://ghirardelli2008.dja.com/ to enter their Chocolate Pleasures Sweetstakes®

MSNBC report of a study by the Yale-Griffin Prevention Research Center recently published in the AMERICAN JOURNAL OF CLINICAL NUTRITION (http://www.msnbc.msn.com/id/25932912/)

Web MD report of study results published in THE JOURNAL OF THE AMERICAN MEDICAL ASSOCIATION and NATURE. (http://www.webmd.com/diet/news/20030827/dark-chocolate-is-healthy-chocolate)

* * * *
My own taste in mysteries ranges far. I find room on my shelf for Ellie Haskell and V.I. Warshawski, and Sukie Stackhouse, and room in my heart for D.I. John Rebus, P.C. Hamish Macbeth, and Old Red Amlingmeyer. My own writing tends toward the cozy slash traditional with my series characters Margaret and Bitsy, who have appeared in seven stories in ALFRED HITCHCOCK MYSTERY MAGAZINE and my novel WILDER RUMORS. But I have also strayed down the noir path with “A WALK IN THE PARK” http://www.hardluckstories.com/Summer2007/Park-MacRae.htm and more recently with “COOKIES,” in the June 2008 issue of HITCHCOCK.

Molly, I love the comparison you've made between chocolate and mysteries--my two weaknesses!

I remember walking into the room last year and seeing you sit at that huge table all by yourself. You did look...harmless. :) Seven a.m. or not, chocolates are my friends.

Sounds as if you plan to attend Manga again this year. If so, let me know and we'll meet for lunch or something fun like that!

Hi, Molly. Sorry this is a late comment, but with the holiday weekend, I stayed away from online stuff and just lived life for a while. But I adored your piece - it was delightful! My two favorite chocolates are Milke (their milk chocolate version in the lavender wrapper with the white cow on it) and Dove dark and milk chocolates. Yum. I tend to like cozies or non graphic mysteries, too. Interesting comparisons you made!

Best of luck with your writing and stop by again soon.