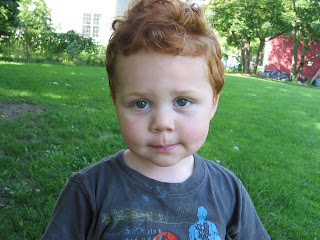 Good morning, friends. I've posted this today (not "my" day! LOL) because MB4 has agreed to host the launch party for Mayra Calvani tomorrow, June 1st. So, here is one of my "Seedlings" articles, straight from the heart. ;o) -- Aaron
***
Last night, per our usual routine, my two little buddies came upstairs to play with me.

Grandsons are precious. They’re inspirational. Hysterical. Adorable. And they keep me humble.

All day I’d toiled under major stress, frantic about getting data ready for a big presentation. I was beat. Exhausted, really. But I looked forward to my time with the boys, not just because I’m besotted with them and love being their grandfather, but because there’s something sublime in those playful moments when we laugh so hard we cry. It’s rejuvenating. It’s therapeutic. Like a shot of life that helps you bear up against the tough times.

Julian, four, was ready the minute he burst into our bedroom.

“Look, Papa! I have the dinosaurs!”

He brandished the “sharp tooth” and the “three horn” with pride. Gordie, three, followed him by seconds, reaching for the Tyrannosaurus Rex.

“I want that one!” he shrieked.

Julian gave in quickly, tossing the toy to him. But a look of concern soon crossed his face.

“Papa! I don’t have a dinosaur for you.”

It didn’t stump him for long. He rummaged in the toy box, feet kicking in the air, and emerged with a stuffed red lion.

“Here you go, Papa. You can be the lion tonight.”

Satisfied that the problem was solved, both boys hopped onto my bed and began to zoom and crash their dinosaurs into my lion.

“Whoa! Wait a minute!” I laughed. “Why are you attacking me?”

Playing superheroes is a frequent game of ours, with or without toys in hand. There are always bad guys who threaten the planet and need to be dispatched, and lots of flying and tumbling often ensues. But I like to mix it up a bit, and make sure my darling grandsons learn some tolerance, empathy, and altruistic characteristics during our imaginative play.

“I’m the king of the forest!” I sang. They stopped their attacks and looked at me like I was crazy. I kept on, morphing into the Cowardly Lion.

I’m not sure what got me going on this vein, but soon images and scenes from the movie flashed across my brain and the stuffed toy became the legendary lion from the Wizard of Oz.

I turned him with tail flailing toward each boy. Of course, Julian pulled it, laughing hysterically. I immediately launched into faux tears, weeping and sobbing like a crazed cartoon character.

“You pulled my tail!”

And thus the game began. Each boy would incite the action by grabbing and yanking on the tail. Then, when the lion cried, they would comfort him with hugs and kisses.

Our play soon spiraled into bad guys lurking in the corner and coming to get us. After Gordie and Julian leapt into the air with fists flying and feet kicking to “get” the bad guys about a dozen times, I convinced them to hide with me under the red flannel sheet on my bed. What does that say about my manliness? I shudder to think. Anyway…

“It’s a magic tent!” I said to their giggles in the dark. “Nobody can hurt us in here.”

Julian, with his too mature analytical brain, said, “But Papa. This is just cloth. A real sword could cut it.”

We got a lot of mileage out of that flannel sheet. Julian especially liked the peephole that was there, courtesy of our puppy trying to bury a bone in my bed the other day. Gordie decided to make the puppy into the bad guy, and then we had someone really fierce to fear. Balto lay on the floor, chewing on yet another toy that wasn’t his, a pretend circular saw that made cool noises like a real one. Each time the toy whirred, we ducked under the magic tent. I told them stories about Dorothy and the witch and the wizard, and couldn’t seem to get the scenes out of my head.

After about an hour of this, I grew weary. I’d been exhausted lately, dealing with the death of my beloved dog (that’s another story) and trying to beat two viruses in a row that slammed me in February. I hadn’t yet regained my usual boundless energy, and knew it was time to say good night.

At least, that’s what I thought.

When I announced “five more minutes,” Gordie ignored me and continued to beat up a stuffed snake. But Julian’s face crumpled and he burst into real tears. Hiccuping, breathless, buckets of tears.

I held him tight and tried a few tactics, but his little heart was broken and there wasn’t much I could do to fix it. Except to play a little longer.

Hey. I’m the grandfather. I’m allowed to do these things. 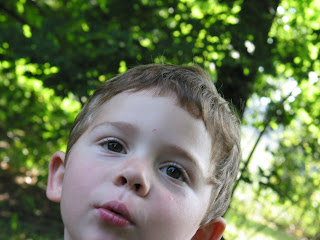 So, we played a little longer. Gordie refused to pick up his toys in the end, and sneaked downstairs to his mommy. Julian picked them up with a long face, and as he was leaving, the tears returned.

He wasn’t manipulating me. These were genuine tears of grief. We hadn’t had much time together over the weekend when he’d visited his father, and we both felt a little cheated. I decided to stop, breathe, and just do what felt right.

Pulling him close to me, I whispered in his ear.

He nodded and swiped the moisture from his cheeks, helping me look for our old copy of the Wizard of Oz. We hadn’t watched it since his mom was a little girl, but of course I’d seen it a gazillion times with my daughters and as a kid. I remembered spying it the last time we’d cleaned, and after a few minutes, I brandished it with a flourish.

I wasn’t sure if four was old enough to handle the scary witch, but I ached to share it with him and decided to take a chance. So we set up it, ignored the hitching and bucking of the screen that came with the crinkled old videotape, and prepared to be mesmerized.

Julian snuggled into my lap. Enchanted, he peppered me with questions. Dorothy began to sing “Over the Rainbow,” and his flurry of chatter stopped for a minute. Halfway through the song, he whispered.

“Papa. The girl is so beautiful. I really like her face.”

I choked up and hugged him tight.

“I bet the witch sings awful,” he said.

A laugh snorted out my nose.

“Well, she doesn’t sing much, but she has a scary voice.”

When Dorothy began to follow the yellow brick road, he started to yawn. And stretch. And yawn some more. So we ended our night, with no more tears, and with a memory I’ll always cherish. Tonight we’ll see more, and hopefully this time Gordie will join us.

The next time your child or grandchild wants more time with you – say yes.

Savor your time together, for the special moments are fleeting and won’t return. No matter what your grownup brain tells you about schedules and rules, reject it. So what if supper is late? Or if you lose twenty minutes of sleep? Or if you miss that movie you were dying to see? That stuff doesn’t matter.

How Sweet. It's always good to spend a little extra time with the kids.

Thanks, Sara. Indeed. And now this article makes me a bit sad, as my daughter has moved out with her fiance and the boys. It's great for them in some ways - the natural progression of independence for her - but I must say I miss our nightly times together. I get them once a week for a sleepover, and we play outside together to try to regain lost time. They're coming today - I can't wait!

Aaron, your story took me back to the days when our children were babies. Whether we spent time reading books, baking a treat, or playing a game, evenings and weekends were always family time.

Two years ago for Christmas our childre (now 22 and 19) gave us a wonderful photo album; a collection of photos taken at home and on vacations. I had forgotten about some of those times and was amazed at how many things we had done and the number of places we had taken them to -- obviously they didn't.

We continued to enjoy doing things together like movie nights, they are still a popular weekend thing. The one thing our children taught us was that you're never too old to act goofy and when they make fun of some silly thing I said or did, I just tell them I'm giving them memories. ;)

Thanks, Marta. It goes so quickly, doesn't it? But those photos and especially the memories in your children's minds are that precious link to those good times. And we know there are many more to come, no matter how old our children (or grandchildren) get!