A Happy Hyphenate, by Jack Maeby 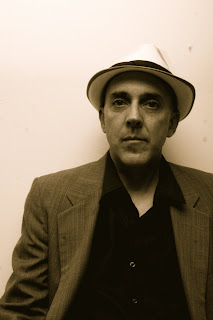 **Murder by 4** welcomes Jack Maeby, musician/writer to our guest forum. Jack recently authored the delightful mystery, THE THORAZINE MIRRORBALL. Read Aaron Lazar's review here on Midwest Book Review's, "Reviewer's Choice."
***
Jack Maeby grew up in upstate New York, where he began playing music professionally while in high school. At age 19, he signed a recording contract with a St. Louis-based record label. After a few years of touring the South and Midwest opening for acts such as The Doobie Brothers, Rod Stewart and Parliament/Funkadelic, Jack returned to Albany to back vocalist David Ward, a veteran of the King Curtis band. Through Ward, he was introduced to the late King Curtis' musical family, which included R&B legends Cornell DuPree, Gordon Edwards and Bernard Purdie.

Moving to New York in the 1980's, Maeby built a career playing piano and organ behind acts such as Etta James, Otis Rush and Lowell Fulson. He was a keyboardist with the Uptown Horns band, accompanying Aaron Neville, Buster Poindexter and many other name attractions on their New York appearances. Jack was a regular member of NY Jazz and Blues Society honoree Danny Draher's band, played regularly with avant-garde jazz artist Marc Ribot and toured Europe with guitarist Joe Taino.

During his time in New York, Maeby was composer and musical director for a number of Off Broadway theater productions at La Mama Etc., CSC Repertory and the McCarter Theater. He began composing for film and television, garnering a Clio nomination for Original Music Scoring. His motion picture and TV work includes the films "Scandal", Disney's "The Arabian Night" and "How the Toys Saved Christmas" and the long-running children's series, "The World of David the Gnome".

After re-locating to Los Angeles in the mid-90's, Maeby began writing fiction while touring Japan as musical director for a vocal group. He studied creative writing under novelist Claire Carmichael (aka Claire McNab) and was the recipient of a 2005 James Kirkwood Literary Award.
***
A Happy Hyphenate, by Jack Maeby

For every Janet Evanovich or Michael Connelly, there are probably at least 1000 published writers who make a living doing something other than writing, and I count myself among them. In the current climate of closing bookstores and diminishing reading habits, big advances are reserved for authors for whom commercial success is a given, leaving the rest of us to compete for the ever-dwindling disposable incomes of the reading public. Until we reach that pinnacle of accomplishment that comes with a place on the bestseller lists and a double digit Amazon ranking, we toil away at whatever it is we’ve been doing to make ends meet since the time before we became writers.
Am I complaining? Perhaps, although I have no right to do so. For most of my adult life, with the exception of a few years here and there, I’ve been a working musician. And in the times when I wasn’t actually performing music, I was usually doing something related to it. My self-image is that of a musician; I think and frequently talk in musical terms, and my books are about music and musicians. So - now that writing has found an equally important place in my creative life, I have evolved into a full-fledged “hyphenate”. Musician/Writer, Author/Instrumentalist, Jazzman/Wordsmith. (Actually “hyphenate” is not an accurate term, since the punctuation mark used to delineate double-taskers is called the slash or virgule. But “slasher” just won’t do, and “virgulate”??)
I’ve discovered that there are both advantages and disadvantages to being identified as a hyphenate. On the down side, there is a commonly held perception that the pursuit of one art must in some way diminish the other. I’ve listened as two musicians, who when discussing a third player who also happened practice medicine, summed up their evaluation by stating “he’s a doctor,” as if his career choice somehow prevented him from attaining master musician status, and excused his musical shortcomings in the same breath. Anyone who has ever reached a certain level of mastery in an art form knows how difficult that process is; therefore, the thinking goes, mastering more than one art must be almost impossible. We who dare try are looked upon with suspicion, if not dismissed outright as dilettantes, when we long to be appreciated as renaissance men and women.
On the other hand, hyphenates are frequently granted some latitude with regard to our abilities at either endeavor. He writes pretty well for a piano player. Hey, for a mystery writer, he didn’t sound too bad. Faint praise, perhaps, but praise, nonetheless. The best part is when one skill throws open a window of opportunity to engage in the other. I find that bookstores are far more open to having me read and sign books when they get the jazz thrown in for free.
For me, it’s necessary to fully embrace both sides of the hyphen/slash/virgule, to obsessively pursue both music and writing with equal vigor, in defiance of the perception that one must necessarily diminish the other. When I finish writing a novel or story, I want it to be evaluated using the same standards employed when judging any work of fiction, not by a lesser yardstick reserved for musicians who write. And when I improvise a bebop solo, I want it to be heard and appreciated for what it is, instead of being graded on a curve because of what I do when I’m not playing jazz.
I take inspiration from my wife, a published young adult novelist who puts at least as much of herself into teaching drama to inner-city public elementary school students as she does revising her manuscripts. When she’s signing copies of her books or working with her writing group, she’s a writer, but in the classroom, she’s Ms. Carol, the Drama Teacher.
Like her, I celebrate my hyphen, knowing that I am blessed to be able to be participate in more than one creative discipline. But even if my books were to start moving up the sales charts to the point where most of my time is spent on literary endeavors, I know that I will always be a musician/writer, and not the other way around. It’s who I am.
Posted by Aaron Paul Lazar at Friday, April 18, 2008

Jack - thanks for posting this piece. It applies to many of us. Now, tell me. Does it make you look really fractured if you are a multi-hyphenate guy? I'm a writer/photographer/gardener/ engineer, in that order. And I also am defined as Dad/Papa/Honey. Wow. This could go on and on. But I know you were referring to primary career and life calling. And I admire your talent so much - I adored your book and will have to get some recordings so I can hear you play, as well!

I think wearing many hats enriches our lives. As you do both well, I don't see your hyphenated life as detrimental. The writing adds a new dimension, rather than detracting.

I am hyphenated too: editor/singer/writer/wife/mother/swimmer/feminist. LOL Not necessarily in that order. Each takes the limelight depending on what is happening at any given moment.

People don't see themselves in this light. We are taught to think of ourselves as being only one thing. We never are. The more facets we have, the more interesting we are. :)

Of course, being good at more than art is challenging and takes a special type of person. You have succeeded in doing it. :)

Thank the Good Lord we can be hyphenates. The alternative is well, not so much fun. I am one too, and proud of it. As long as my endeavors are in the creative vein, I am a happy complete soul.
Pleased to meet you, Jack!

Jack, thanks so much for posting in MB4. I never thought of myself has hyphenated, but I guess I am; wife, mom, daughter, sister, friend, on one hand and HR rep, event planner, author, and artist on the other. These roles are what make me who I am and each experience has eased into my writing.

I had to smile because our family doctor (a fellow baby boomer) is a fantastic jazz musician. In fact, he owns a local pub/live music place called; (what else?) "Docs." He told me once that he's always been a musician at heart but needed to do something to make a living. That's our common thread.

Best of luck with all your endeavors! Look forward to seeing here in MB4 again!