Please help me welcome S.W. Vaughn back to Murderby4 today! We've certainly missed her, and were delighted when she agreed to write us a piece about how her latest book came to life. Welcome, Sonya!

A long time ago, when I first started writing novels, I committed a nearly unforgivable sin. I decided to write romance, because it would be “easy.”

I was so very wrong.

The fact that I didn't know any romance writers at the time turned out to be a mixed blessing. On the positive side, if I'd voiced my horribly uninformed beliefs—that it couldn't be that hard writing a romance, all you did was take a guy and a girl and make them fall in love, I mean look at all those Harlequins out there—and there had been a romance writer in the vicinity, they might have committed justifiable homicide against me.

Then again, if I had been acquainted with one, they might have stopped me from writing not one, but two, unpublishable piles of crap that I thought were romance novels.

I gave up on writing romance when I realized how horrible the “novels” I'd written actually were, and turned instead to thrillers. I wrote a bunch of those, and then discovered urban fantasy and dove right in.

More than a dozen completed novels after my first two train-wreck attempts, I had an idea...for a romance novel.

I wasn't sure I should write it. I'd already irretrievably mangled things twice. But the story wouldn't leave me alone, so I gave in and plowed ahead. I struggled with the romantic elements, the balance between the plot and developing the central relationship, but I'd come a long way in terms of craft. When I finished it, I thought it was much better than those long-ago disasters—and so did an editor at Loose Id, where I ended up placing the book. Readers seemed to enjoy it too, since I went on to write a trilogy.

And then, I had a Big Romantic Idea...which would turn out to be one of the toughest writing challenges I'd ever faced. Up until that point, even my romance stories had been action-based plots with a side of romance. But with this new idea, the story WAS the romantic relationship. And I wasn't sure I could do it justice.

Once again, though, the story refused to let itself get dropped. I started writing it, and stopped when deadlines got in the way and I had to finish a different book. When I went back to the Big Romantic Idea and read what I'd written, I knew it just wasn't right. I had to discard just about everything except the characters' names and start over again.

There were more stops and starts along the way, and other “deadline” novels interrupted. The story wanted to be written, but I just couldn't give myself the justification to get it done. I might have been subconsciously stopping myself because I still worried that I wouldn't get it right. Then, an editor from a popular romance publisher I'd never worked with before contacted me. She'd read one of my Loose Id titles, enjoyed it, and wanted to know if I'd consider writing a book for them.

I sent her my partially completed Big Romantic Idea. She loved it, and I was offered a contract.

Now I had to finish the book.

I worried constantly while I went about writing the rest. There was too much romantic tension; there wasn't enough. This character is too overpowering; that character is too stupid to live. The story is too complicated; the story isn't complicated enough. I sweated all the small stuff, determined to actually write a love story that was worth reading.

It was harder than I ever imagined. But when I finally wrote The End, I was actually pleased with the finished product. I could count the number of times that had happened before on one hand, and still have five fingers left over.

And so, I'm very proud to announce that MY SOUL TO SAVE is now available from Ellora's Cave Blush line (the non-erotic one). It's a love story—both in the words on the pages, and the process it took to get them there.

MY SOUL TO SAVE

He’s a demon…and she’s no angel.

Logan Frost, failed singer and recovering meth addict, is given the chance of a lifetime when a friend offers her the lead spot in his established rock band. But things get complicated when she starts hallucinating human-ish creatures with black eyes who disappear through walls. So when the gorgeous, mysterious Jaeryth falls into her life, claiming he can see the creatures too, she can’t help but feel a bond with him.

Jaeryth is a demon who’s long been obsessed with Logan—so much that he’s been ignoring his demonic duties. As punishment, he’s been made human and charged with corrupting Logan, who harbors a power she’s unaware of that could be used for great good…or evil. And if Jaeryth can’t corrupt her, he has to kill her.

If he doesn’t complete his mission, he’ll spend eternity being tortured in Hell. Unfortunately, he’s falling in love with the woman he’s supposed to destroy. 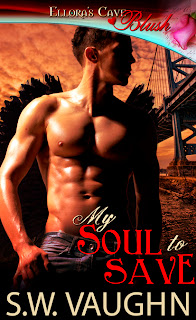 MY SOUL TO SAVE is available in ebook format from Ellora's Cave. You can find out more on my website at http://swvaughn.wordpress.com/
Posted by Aaron Paul Lazar at Monday, February 13, 2012

Sonya, it's such a thrill to have you back here at Murderby4! Best of luck with your newest release. I've read it and LOVED it. You really nailed the romantic suspense - it killed me all the way through!!! Kudos!

Hey!!! So glad to see you here and thanks for making me bemoan my inability to spend another dime on books for a while :( boo hiss!! It looks so awesome ! Really cool cover and I know the work within is just as amazing as everything you do. Xoxo

Aaron, so glad you enjoyed the story! Thanks so much for having me over today! :-)

Kim, thank you! And you are most welcome to a complementary copy... just let me know. :-)