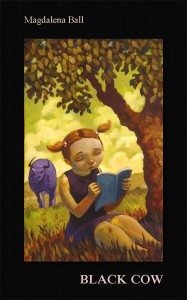 I’ve read Ms. Ball’s books before, and have been enthralled by them. SLEEP BEFORE EVENING was the first novel I read, and I was absorbed by the well-told story. I’ve read her poetry, and been impressed with the way she weaves love and science and the wonder of the universe into her work without sounding pretentious or sappy.

BLACK COW, her new release, is a literary novel that breaks through to new levels, immersing her readers into the lives of an Australian family in very serious trouble. The problems don’t show on the outside, but they’re deeply ingrained in the fabric of the family, in their souls, and in their hearts. The metamorphosis of this very authentic family hurts, is hard-earned, and will make you beg for resolution.

It’s not an unpleasant experience—on the contrary—but it feels so real that the reader will absorb Ms. Ball’s characters’ pain like litmus paper soaks up water. I literally had to put the book down and stop for a while, because the stress James and Freya experienced in their intensely acquisitive world felt so uncomfortable that I thought my own blood pressure was spiking.

I ached for them to stop the madness, to look at each other and help each other, and to start thinking about what matters most in life.

Not only do husband and wife James and Freya, or their children Cameron and Dylan jump off the pages, but their inner thoughts and dialogue ring true. Written in third person POV, the reader moves effortlessly from mother to father, to anorexic daughter to the love-starved son. It feels natural and not forced, which is often a hard situation for 3rd person writers to avoid. See this segment from the daughter’s point of view just after her grandmother passed:
Cameron began to cry, so silently that it was almost not a cry at all, just falling rain on three generations of women through the memories of past, the unreliability of the present and the non-existent future. In the cooling entropy of now, she felt a deep connection with the woman who appeared on the page before her, and then jerked her head up, shocked by the snapping of the string. It was as if a helix had unwound inside her. Suddenly the room seemed intensely empty and looking at the picture, Cameron knew that her grandmother was dead.

What resonated most with me were the epic truths behind the story. I often lament today’s society where kids rarely play outdoors just for fun, where their lives are over-organized with everyone hurrying from one activity to another, where every room in the house has a television/DVD player and/or cable box, where each parent has a nice new car, where even children have iPods or iPhones or iPads, where families go on lavish vacations, where shopping is forever for new items (God forbid people are seen near a Salvation Army or Goodwill store, where so many good deals are to be had!), where meals are mostly takeout or quick-fix versions because both parents have to work to help pay for all the prior junk, and where there are few if any slow-cooked meals in anyone’s lives…

What happened to one parent being home, making real mashed potatoes, cooking banana bread, or simmering a stew all day long? What happened to the freedom of coming home from school, getting hugs from mom or dad, finishing up homework, and running outside to simply play? What happened to picking up a stick to sword fight, to digging in big piles of dirt, to jumping in mile-high mountains of leaves?

What happened was people wanting too much stuff, like Freya’s family in BLACK COW. What happened was the stuff growing and building to such an insane level that both parents “have” to work to sustain it.

This vicious cycle is intimately depicted in BLACK COW, and as much as I already fervently believed in living life naturally, simply, making family count first, and being one with nature, this book made me savor it more, made me examine my life even closer, and made me grateful for the decisions we’ve made as a family.

Being a father myself, and having spent 28 years in corporate America, I related to James’ pain. The stress involved in nonsensical, impossible corporate goal setting, the day-to-day grind through traffic and with people who aren’t even close to being friends, really drove home and made me grateful I had personally escaped that life and now work for a small company where the work that gets done actually makes sense! See this insightful passage from James’ viewpoint:

You keep moving like a shark through the ocean so you didn’t die by standing still. But that was a mistake. People didn’t die by standing still. Reflection wasn’t deadly. They wouldn’t die from taking time away from the grind, even if none of them turned on their phones, though there was Cameron texting, even as she was walking towards the plane. It was the motion that would kill them. What was deadly was the running and gathering and shoving to get in front. He leaned towards Cameron: “Turn off the phone.”

When the story pivots after several devastating problems rise to a head, and James can take it no more, the family moves to a breathtakingly gorgeous farm in Tasmania, a long-time dream that Freya has harbored and tried to promote. James quits his job, Freya leaves her real estate sales position, and the kids are uprooted from their private school with the hope that they can run this cow farm, raise their own vegetables, create their own electricity, capture their own rain water, and manage it all with little or no experience.

The process is not easy, there is no magical solution or healing of all ills, but little by little, they pull together. The move to Tasmania was my favorite segment of BLACK COW, and I savored each page. I lusted after the land with Freya, ached to run my fingers over the black cows’ furry necks with James, felt the family’s pains when they weeded carrots, and reveled in the fresh air and gorgeous scenery. Although we live on three acres in the country and grow big gardens, our days of tending livestock are over. But now I want that farm. Badly.

Magdalena Ball writes with insightful realism, but there is beauty and passion and hope woven into the words, as well. See this segment where Freya’s vision is starting to come clear:

The sweater was a vibrant heathery pink, white and green, with bands of snowflakes, crosses and circles. It was more than beautiful. Freya couldn’t stop touching the wool, which was both soft and tough. It was fibrous, textured, and yet still smooth. Jane and her partner were trying to make a living from their unique wool, and there was interest from the mainland. They only lived five kilometres in the opposite direction to Hobart. Though Freya’s own knitting was still a far cry from perfect, somehow the beautiful yarn, Jane’s tips, and those clicking needles were unknitting the muscles in her body and she felt herself relaxing into a kind of half-trance. She couldn’t quite hear Jane’s words as she smiled and kept on with her stitches. Something was becoming clear to her instead. Her life was like this sweater, and she could knit in whatever colours, textures, and emotions she wanted. No matter what, she was the creator of her life, and she could make it glorious or dull, beautiful or flat. It was hers to create. Her children and husband might be inspired or hindered by her, but they had their own lives to knit.

BLACK COW is an intelligent, deeply reflective story of a family who reaches its deepest lows, then transcends the expected norm to reconnect with the earth and each other in a joyful, satisfying adventure.

What a wonderful review. Black Cow sounds like an incredible read. Your recommendation is pretty high in my books, so I'll definitely take a look. Thanks, Aaron. I love these kinds of reads, epic, yet grassroots honest. It's on my list.

Hi, Joylene! Thanks for stopping by. Maggie's work really is very deep, real, and intense. Of course, you already know what I said about it, so I'm just repeating myself here, LOL! Happy reading and writing!

Fantastic review - thanks so much Aaron for your beautiful attention and lucidity.

A free mini-book sample of Black Cow can be picked up
here.