Book Giveaway - NO MARK UPON HER by Deborah Crombie 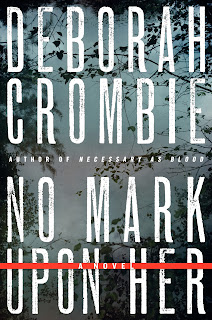 This week Harper Collins is gearing up for the release of NO MARK UPON HER by Deborah Crombie, and we at MB4 are proud to be hosting a giveaway today for one of our Murderby4 fans!

Here's your chance to win a copy of the book - all you have to do is comment below to be eligible.

Deborah Crombie is a New York Times Notable author and has been nominated for and won many awards including the New York Times Book of the Year. As if that wasn't enough, her novel Dreaming of the Bones, was chosen by the Independent Mystery Booksellers of America as one of the 100 Best Crime Novels of the Century. Now that's something most writers can only dream about!

One Murderby4 grand-prize winner will receive: A copy of No Mark Upon Her by Deborah Crombie!

Here's a synopsis to whet your appetite for the book:

When a K9 search-and-rescue team discovers a woman's body tangled up with debris in the river, Scotland Yard superintendent Duncan Kincaid finds himself heading an investigation fraught with complications. The victim, Rebecca Meredith, was a talented but difficult woman with many admirers—and just as many enemies. An Olympic contender on the verge of a controversial comeback, she was also a high-ranking detective with the Met—a fact that raises a host of political and ethical issues in an already sensitive case.

To further complicate the situation, a separate investigation, led by Detective Inspector Gemma James, Kincaid's wife, soon reveals a disturbing—and possibly related—series of crimes, widening the field of suspects. But when someone tries to kill the search-and-rescue team member who found Rebecca's body, the case becomes even more complex and dangerous, involving powerful interests with tentacles that reach deep into the heart of the Met itself.

Surrounded by enemies with friendly faces, pressured to find answers quickly while protecting the Yard at all costs, his career and reputation on the line, Kincaid must race to catch the killer before more innocent lives are lost—including his own. 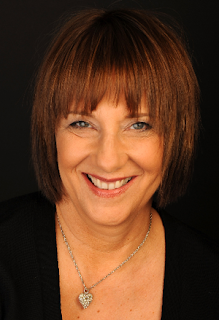 Crombie's novels are published in North America, Japan, Germany, Italy, France, Norway, the Netherlands, Czechoslovakia, Spain, Romania, Greece, Turkey, the United Kingdom, and numerous other countries. The latest novel in the series, No Mark Upon Her, was published in August, 2011 by Pan Macmillan in the UK, and will be released in February, 2012 by William Morrow in the US.

Although she travels to England several times a year, Crombie now lives in McKinney, Texas, an historic town north of Dallas, sharing a 1905 house with her husband, Rick Wilson, two German shepherds (Hallie and Neela), and three cats. She is currently working on her fifteenth Duncan Kincaid/Gemma James novel, as yet untitled.

Hello, Aaron, you know how I love a good suspense/ thriller. This certainly sounds promising and she sounds like a wonderful author.

Good luck on the USA release of your newest novel.

Robin P. Waldrop
Author of Ties To The Blood Moon

Thank you Aaron for sharing. You know how I am a advid fan to thillers and mysteries. And that I go through books like a box of chocolates, Thanks again- Pineleaf

I would absolutely love to read this and have made a note to read her Dreaming of the Bones.
rsgrandinetti@yahoo(DOT)com

Thanks, Robin, Pineleaf, and Renee! I should have mentioned, if anyone comments in the future, please do as Renee did and include your email. I already have Robin's and Pineleaf's, so all is good! Thanks, all, and good luck!

The winner of this book is Pineleaf. I will contact you off line to get your address! Congrats!