My books have been electrified. They’re now available for pretty much any and every electronic gizmo you might care to read them on. The money is now, well, if not exactly rolling in, it’s begun creeping in. I’m glad for that. A little sad, too. I have high hopes, and some real fears. Getting to this point has been a lesson.


First I had to get the rights back to my backlist. You can’t publish your books as ebooks unless you have the right to do so and can prove it.


That was no problem for my first book, WRONG SIDE OF THE WALL. It had been remaindered a while ago and I had the rights reversion letter in hand.

The four Ray Sharp novels were another matter. The original publisher had been sold to another publisher. The new publisher was doing little to promote further sales of the books they had got rights to in the deal. They’d even made it clear that they had no intention of reprinting any of the books. But they still had stock in their warehouse and were reluctant to part with my rights until they’d sold most of it. (Three of the four books had earned back their advance and were paying me royalties.) 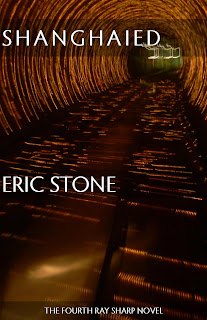 I was negotiating with the new publisher to get my rights back when I had a stroke of “luck.” They violated my contract with them in a way that allowed me to unilaterally take back the rights, whether they liked it or not. (There’s a lesson here: know and understand your contract or have a lawyer or agent who does and will keep on top of it for you.) It took a brief correspondence between my lawyer and the publisher, but I got my rights reversion letter.

Then the books needed formatting to become ebooks. Amazon, Barnes & Noble and Lulu (an ebook publisher/distributor who can get your ebook out to a wide variety of places) all have ways on their websites of formatting your own ebook. Unless you really know what you’re doing – don’t do it. I’ve seen too many badly formatted ebooks. Farm the job out if, like me, you aren’t so hot at HTML. It’s worth the money. I paid $150 per book for two files each – a mobi file for Amazon and an epub file for everything else.


You’re probably going to need new covers, too. I don’t own the rights to the covers of my previously published books.


But that’s not all. While Amazon doesn’t require you to come up with a new ISBN for your ebooks, Barnes & Noble, SONY, iBooks and several others do. Lulu, which will publish to iBooks and SONY and others for you, will happily assign you an ISBN if you request it, but then it becomes the publisher of record. (Lulu also requires a different ISBN than the one you used for B&N.) Do yourself a favor, go to Bowker https://www.myidentifiers.com/index.php?page=home and buy your own. (It’s cheaper in blocks of 10. I have five ebooks in two different formats each and have used up all 10.)


Price your ebooks to sell. Mine are all priced at $2.99. And because I am the sole publisher of them, my royalties are all higher per book than they ever were on any of the paperback editions of my books, and nearly the same as they were on the hardbacks.


If, on the other hand, your traditional publisher is publishing your ebooks, the standard contract these days calls for the publisher to get 75% of the royalty and the author to get 25%. That is a really crappy deal for you, the author. You might, however, have no choice if you want any form of traditional publishing deal. Do yourself and all the authors who follow in your footsteps a favor and ask your agent to battle hard for better terms – at least a 50-50 split, ideally better than that. You probably won’t get it – publishers are as aware of the fact that ebooks are the wave of the future as you are. But if we all put up a fight, sooner or later we might begin to get somewhere.


The sad part of all this for me is, of course, the impact it’s having on bookstores. (How can any bookstore compete with my cheap ebooks?) I recently spent a teary-eyed evening at the closing party for the Mystery Bookstore in Westwood here in Los Angeles. The rise of ebooks is part of what shut the place down. But I don’t feel guilty about my ebooks. As an author trying to make a living from my writing I have no choice but to change with the times.


Bookstores, too, are going to have to change. Maybe we will see the rise of “book galleries” – places where people go to hang out, browse at books (one copy of each), drink coffee, quaff cocktails and download what they’ve seen in the store. Or something else might develop. The future is, as always, unknown. That can be scary, but it can also be filled with electric opportunity.

About the author:
Eric Stone worked for many years as a writer, reporter, photographer, editor and publisher in the U.S. and Asia, covering everything from economics to crime; politics to sex, drugs and rock & roll. He has traveled the world for both work and play, and lives in Los Angeles.
He is the author of the four Ray Sharp novels: SHANGHAIED, FLIGHT OF THE HORNBILL, GRAVE IMPORTS and THE LIVING ROOM OF THE DEAD. The books are set in Asia and based on stories that Eric covered as a journalist. He is also the author of the true crime / sports biography, WRONG SIDE OF THE WALL

Thanks for hosting my guest blog. It's strange being here - in Asia, currently in Indonesia - and being able to keep close tabs on book sales electronically. Bookstores seem to be doing okay in Bangkok and here in Jakarta. I don't think ebooks have begun to take off here yet.

Eric, so many of your experinces hit home with me. This proves that it's not enough for a writer to know the craft, but the business as well.

Thanks so much for sharing your journey with us. And ... speaking of journey, enjoy your travels and wish you a safe return!

That payment thing from publisher to author really stinks. I am glad to hear the information from someone who really knows the scoop. Glad to have you here, Eric!

Unfortunately I don't think the payment structure is going to change until a bunch of best selling authors, the only ones with any clout, start trying to put the muscle on the publishers. The rest of us, if we want traditional publishing contracts at all, have very little leverage.

Fabulous article. I like how you not only shared your experience, but provided some great advice on how to go about handling things.

Part of me wonders if clout is what is needed, or numbers. If you know your publishing numbers of the electronic re-releases of out of print books, you know what is fair to receive from the publisher. Before, it really was a complete unknown -- you could sell 5,000 books, or 5,000,000 and no one knew until the books were reviewed, ordered, out on the shelves, and bought and paid for.

I suspect writers with this knowledge will have much more ability to negotiate a fair contract with a publisher (or maybe I should say, resist an unfair contract).

Traditional publishing, I believe, will become the sole bastion of those whom publishers know they can make a profit from; that sounds rather obvious, I know, but I think the trend to ebooks will sooner than later create an immense pool from which the big houses can fish from with little risk. All the risk will be borne by the authors. Within five years e-readers will be as ubiquitous as phones or DVD players.

This will continue to hold down the overall profits for struggling independent authors and perpetuate escalating profits for the big houses and digital reader manufacturers.

It's much like the change the music industry is going through—they haven't quite settled on a standard model yet, either.

this sure seems like a lot of work. I guess you need a team to write a book, publish and keep tract of all this stuff. Thanks for sharing, very informative.

Hi, Eric. Sorry I'm a day behind in commenting, but I thoroughly enjoyed reading about your journey to eBookdom. :o) Thanks for guesting today, many tough topics. Of course the royalties ring home with all of us. Making three bucks on your eBook is more than most of us make on our hardbackss - and it's most appealing to readers. My wife and I have this year only become fans of eBooks - and we order them constantly online and from her Kindle. Now the virtual shelf is almost as high as the one on our bedstands. ;o) Best of luck with all of your books, and come back again!

Thanks again for having me. It's an interesting topic and one that is going to change an awful lot for many of us writers before long.

You're more than welcome! It's been our pleasure.

Please keep MB4 in mind when your next book comes out. You're always welcomed.

Wow, what an amazing post. I am always stunned to hear authors' stories and struggles beyond writing their stories. I wish you the greatest of success, Eric!!

Great article. Thanks for the advice.