I've been empty-headed this weekend, trying to come up with an article for you. You know, I don't often have writers' block, but when it comes to creating weekly articles, there are times when I'm just... blank.

I've been digging around my files and found this review I wrote a while back for one of my favorite books by Lad Moore. This man is a gem, and if you search MB4 you'll see a number of great articles and stories by Lad in our archives. 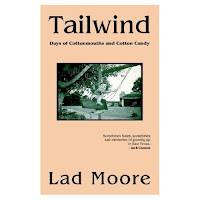 Tailwind: Days of Cottonmouths and Cotton Candy, by Lad Moore, shines with vignettes that drip like pearls of dew, one at a time, to be savored as cool water on a parched tongue. Each story, replete with humor and pathos, transports the reader to the world of rural East Texas in the mid-twentieth century. Mr. Moore’s boyhood was filled with toy soldiers, hot tar on bare feet, fireflies, and shenanigans born of times less electronic, less structured, and certainly less affluent than today.

Imagine sitting around a campfire with a storyteller whose history blazes with events so exotic, so traumatic, and yet so rich that they captivate you with more intensity than the biggest Hollywood blockbuster. Now, envision the author speaking in a comfortable voice, resonant with humility and humor. This is Lad Moore. This is a writer for all mankind, a universal genius.

Mr. Moore writes with a folksy elegance that is unparalleled in this age. Reminiscent of the great American masters, Tailwind should and will be included as a fundamental part of America’s heritage. The ultimate revelation comes when readers discover that Mr. Moore’s tales are true – stemming from a tumultuous and difficult childhood in which he was abandoned by his mother at six months, barely raised by a glamorous, oft-absent father, and shipped off to military school at the age of eight. Betrayed by his father’s second wife, who stole the family fortune, Mr. Moore suffered poverty with his beloved grandmother, but thankfully was taught of deeper riches via her warm affection and exemplary morality.

Tailwind becomes an extension of one’s being. This reader allowed himself a story every few days – stretching the experience as long as possible, relishing each chapter with nostalgic reverence.

Take for example, the following vignettes:

Cannon fire – sweetgum burs collected in a Mrs. Tucker’s lard can – rained down on the standing forces from the hill above them. Shots fell equally, alternating between the armies, with full sound effects coughed out from deep in my throat. After the barrage, casualty count determined the winner and loser. Soldiers that lost their upright stance from the bombardment must be broken in half – not to be recycled. A mass grave awaited them in the storm sewer.

Tailwind sings with poetic images of life in rural America. When finishing the last chapter, a sense of sadness descends, akin to bidding farewell to a dear friend. Consolation comes only in the knowledge that Mr. Moore’s second book, Odie Dodie, The Life and Crimes of a Travelin’ Preacher Man, is now available for purchase.

I love Lad's writing! thanks for sharing !

Kim Smith said...
This comment has been removed by the author.
February 28, 2011