Who's Afraid of the Big, Bad Conference?

This past weekend, I attended Authors After Dark in New Jersey, my first-ever conference as an author (as opposed to an aspiring writer or a staff minion, like I’ve been at other conferences). In addition to this being my first real writing conference, it was also the first time I was asked to speak in an authorial capacity.

In other words, I was supposed to pretend I was a Real Writer and knew what I was talking about.

Not being one for public speaking – as in, I’d rather clean all the toilets in Grand Central Station with my tongue than talk in front of an audience – I was terrified. And there were plenty of other things to petrify me about the prospect. I’d never been to New Jersey. Didn’t know anyone who’d be there. I own a decided lack of professional clothing, which was worsened by the recent move. And I’m not a social creature... in fact, I’m barely domesticated. This conference took me out of just about every comfort zone I possess.

I expected to spend most of the three days hiding in the hotel room with my laptop, squeaking my way through the panels I was scheduled to be on (thank the God of Small Favors, I didn’t have any solo talks), crawling under my lonely table at Saturday’s group book signing while everyone else chatted with their throngs of fans, and fleeing for the train station the moment we were released.

Happily, I can now report that none of these things happened. Except the squeaking part – during the first panel, I was definitely a mouse. But by the third, I had managed to evolve to Court Jester, and the audience laughed with me instead of at me.

I made myself talk to anyone wearing a conference nametag. Shockingly, no one gave me the who-are-you? stare, or made me feel like a groveling wannabe. Everyone was warm, welcoming, and genuinely happy to be there interacting with each other. I met lots of readers, lots of writers, lots of bloggers and crafters and staff members. And they were all just people like me with common interests: books and reading.

In the past, my few experiences with book signings had been underwhelming (that is, other than family and friends I begged to come, no one’s showed up). But this time, not only did people come and talk to me – I sold out of every copy of both books I had available, Master of None and Skin Deep. In addition to books, I also signed programs and tote bags. A few people actually sought me out specifically. I was floored.

One of the biggest highlights for me was meeting other authors. When I work at the National Publicity Summit, we stress to the attendees the importance of networking with peers, and tell them it’s just as valuable as meeting the media – but I never really understood how important it is until this conference. Now, after meeting truly awesome people like Bronwyn Green, Mia Watts, Kris Norris, Brynn Paulin, and Jennifer Armintrout, sharing a room with the lovely Selena Illyria and Diana Castilleja (and Kathy with the stripes), and meeting the fiery and funny conference maven/organizer Stella Price, I get it. These ladies made my experience unforgettable, and I’m looking forward to seeing them again at future conferences – not to mention keeping in touch between cons.

So if you’ve been thinking of attending a conference, but you’re worried that you won’t fit in or benefit from the experience – don’t worry. Everyone gains something. Even awkward bundles of social jelly like me. I’ll be attending AAD next year in Philadelphia... and I hope to see you there, too!

And here's a bonus: the first clear picture of me I've ever placed on this blog. I am smiling because I've just signed a bunch of actual book, and I'm drinking because I have talked more in the past few days than I usually do in a month. Thank you, Bronwyn, for taking this picture so I could prove I was there! :-) 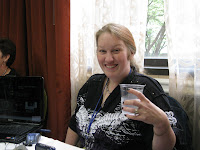 OMG!!! I couldn’t believe what I was reading here, Sonya!!

I LOVE the fact that you finally came out of hiding.

I LOVE that you were forced into public speaking and discovered your ability to do so without perishing into a puff of smoke.

I LOVE the fact that you finally saw with your own eyes what your pals (me included) have told you for years—yes, people will love your writing.

I LOVE the fact that you mingled and had a great time instead of staying in your dark little room or clean the toilets.

I LOVE the fact that you sold every book you had and were still asked to sign tote bags and programs.

I LOVE, LOVE, LOVE that wonderful photo of you—it’s really a great photo!!

Best of all, I LOVE seeing you happy!

Thanks SO much for sharing your conference experience with us. Hugs, gal pal!

(And I totally waffled on posting the pic, but ultimately decided what the hell. LOL)

Marta, good for you!

Me, too. I feel like a proud Papa whose now able to say, "Told ya so." I knew you had it in you, my dear friend. I just knew it! You have such a strong voice through the written word, it's about time that lovely voice came out of your mouth! Yay!

I'm thrilled. Simply thrilled. And so damned proud of you, Kiddo!

And look at that smiling face. I love it!

Huge congrats on such a successful event. As you already know, we all knew this would be the outcome. You are a wonderfully gifted, and beautiful woman. I cannot wait until I get to do this!

Aaron, thank you. I know I've been absolutely beastly about doing things like this... and the more I look at it, the more my smiling face looks demonic. LOL. I was feeling a wee bit evil at that point!

My blogging pals are the BEST!!!

So glad you had a good experience! I love writing and mystery cons--and being on a panel is definitely a plus. It'll be so much easier next time, you'll actually look forward to it.

Thanks for the encouragement. I've yet to attend a conference and know that I need to get out there and meet and greet. Appreciate you sharing this experience.