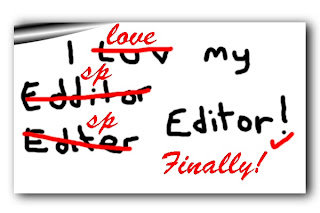 Rules can be broken only after you’ve learned them.

12 points to remember on self-editing:

1. Don’t describe every detail about a character in the first paragraph. Allow the reader to engage his or her imagination and get to know them a little bit at a time. When we meet someone, we don’t learn everything about them in the first hour. Similarly, the character should come to life gradually through dialogue, actions, reactions, and through the eyes and words of the other characters.


2. For a tense scene that needs to show urgency use short, abrupt sentences. Don’t kill the suspense with flowery prose, exposition, or excessive internal dialogue.


3. Pace it. Dialogue speeds the prose. After a fast-paced section, slow things down and give the reader a breather through some carefully written narrative. Narration can be used as a transitional tool to get the reader from one scene to the next or when the prose needs to slow down. However, if not done correctly, the writer will risk turning the narration into information dump sites in which the he or she tells the reader all he or she needs to know. If the narration describes an important turn of events, convert it into a scene between characters. Remember that dialogue is far more interesting and engages the reader’s emotions rather than the intellect.

4. Show don’t tell. Two of my favorite quotes to drive this home are:
"Don't tell me the moon is shining; show me the glint of light on broken glass." Chekhov
"Don't tell me about the tragedies of war; show me the child's shoe discarded by the side of the road." author unknown


5. Don’t let the characters’ dialogue turn into exposition; when a character speaks for the sake of informing the reader.

6. Separate one character’s words and actions from another character through paragraph breaks. No exceptions.

7. Dialogue attribution—stick to “said” written after the proper noun or pronoun. If the character is excited, show it through his or her words and actions, not the attribution.

8. Replace tags with beats as an alternate way to vary the dialogue and show action. “Tom where’s Hank?” She lowered her gaze to the dark red stain sprayed across the front of his shirt. “Oh my God, Tom. How could you?”


9. Look for repetition of words or information to avoid redundancy. If you’ve communicated the information well, once should be enough. When the reader needs to be reminded of an event that happened several chapters before, find a fresh way to relay the information.


10. Some adverbs are necessary, but a try to get rid of attribute adverbs, “ly” words as much as possible. They tell the reader how the character said something rather than show. Replace them with action verb. Instead of: “He angrily punched the pillow.” Try: “He slammed a fist into the pillow.”

12. Know when to end your chapter. You’ve written a great chapter, you’ve come up with a fantastic twist for a page-turning ending. You’re certain it will shove the reader to the edge of the chair while he or she turns the page. Don’t ruin the suspense by writing two or three more paragraphs explaining how the character feels. The reader doesn’t need, or care at this point, what the character does next. If you have to explain it, rewrite it.

A brief thought about critiques:  Writing is an on-going learning process and the critique is an excellent way for an author to know if he or she is on track. Don’t accept rude or cruel comments, but to expect anything less than an honest, straightforward, and constructive critique, is a waste of everyone’s time.

Experience has changed my attitude toward and expectations of a critique. Initially, I looked to others for encouragement. Now I question the light critique that doesn’t catch inconsistencies, point out technical problems, or question a character’s motives. I’m no less sensitive or thicker-skinned than I was before. A harsh critique can still be as painful as a swift kick in the shins, but my focus is on pushing my writing to the next level. Although the occasional pat on the back feels great, an honest critique is the only way to advance the skill.


About the author:
Marta Stephens writes crime mystery/suspense. Her books are available online at familiar shops such as all the Amazons, Barnes & Noble, Borders, Books-a-Million, and Powells. Other locations include, but are not limited to those listed on her website, www.martastephens-author.com.

Great tips, Marta. You said more here than some writing books. I'm going to print these out and keep them wherever I write.

This is great advice!

I like to call #5 "As you know, Bob" syndrome. Very annoying to read one character telling another character things that s/he obviously already knows... :-)

Hey John! Good of you to stop by. Glad to know you found these helpful!

Ditto, Sonya. One thing that irks me is the writer who insists on using only pronouns to keep the identity of the "bad guy" a "mystery." LOL kind of tough to keep characters straight when there's more than one male or female character in the scene.

Marta, I love your collection of tips. Wonderful. Sorry this is a day late - we spent the day yesterday with our CEO from Germany, taking him all over for meetings and having dinner, etc. A sixteen hour day, but it went great. Thanks for posting this!

Thank you, Marta!
Your post was very insightful and I learned more from it. The way you gave examples helped and made it easier to comprehend. This was a worth while read.
Bravo!