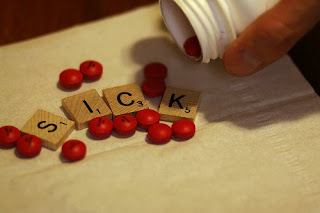 Sorry folks. I am sick as a dog today. I thought I would just post up a little short short for you instead of trying to chat. I sound like a bullfrog anyway!


The knock on his thin wooden door made him jump. Then the sound of her voice outside made him take action. He strode to the entrance and stood listening for a moment.

“What do you want?” He cracked the door open slightly, hoping she would take the hint. “You shouldn’t be here.”

“You owe me an explanation. I have to talk to you, Jack, let me in.”

“No, I don’t. I told you everything you need to know. What makes you think coming here at this hour will make any difference anyway?” He kept his voice low, untouched by the terror that filled him at her appearance.

She pushed on the door. “If you would just listen to me, we could work this out.”

“I don’t think so,” he said, peering over her head at the empty street. “But, okay. You have five minutes.”
She brushed past him. No sense in arguing. Let her have her say and get on with business.

She strode into the living room still awash with the soft light of the lamp in the corner. He had gone to sleep with it on again. His neck was killing him from falling asleep on the couch.

“I want to know what I’m supposed to do. You made it obvious you were finished with me, but what now? I thought we had something going on.” She paced, chewing her nails.

“At one time, I would have agreed with you, but things change and people change and that’s where we are now. I feel differently.”

He averted his eyes, praying she couldn’t tell. What excuse could he give?

“No. I’m not lying. There’s no point in continuing this conversation. I think it’s time you left.” To emphasize his point, he started to the door. She grabbed his arm and stopped him.

“Is it another woman? Just tell me for Christ’s sake!”

He looked at her hand on his arm and let his gaze travel up the tanned arm to her face. Her eyes were swollen and red from crying, and her face was flushed and angry. He fought against the urge to take her into his arms and kiss her until she forgot how badly he had hurt her. “Yes. It’s another woman. Happy now?” He pulled his arm away and took a deep breath for strength. “I don’t love you anymore.”

She bit her lip and studied him. He looked away. He couldn’t stand the accusation in her eyes.

“Okay. I’ll leave. I hope you two are very happy.”

Suddenly, everything that had happened between them, all the good times, the fun-loving way she had of making his world right, assaulted him. He took a step.

What could he say to make her understand? There was deep need in her eyes, and he knew whatever he said would either crush it or kindle it into a burning flame between them. He wanted her, but he knew it would be putting her life in danger to give in now. His past had found him, had found them both, and now certain death or dismemberment lay just around the corner. He could never haul her down this road with him no matter how much it hurt to send her away.

“It’s … I …” he stammered. Pleading with her to understand wouldn’t get it. “I hope you have a good life.”

She sobbed as she yanked the door open and fled.

He walked to the window overlooking the apartment parking lot, lifted the curtain, and watched as she ran to her car and thrust herself inside. She didn’t pull out for a long time, and he knew she sat there, crying.

Then, his eye caught the man standing on the curb across the lot. His gray hair lifted every once in a while as the wind picked strands of it up and blew it away from his scalp. The khaki trench coat he wore whipped a bit around his legs. A trench coat would hide the gun. Jack was sure of it.

His heartbeat changed from a steady throb to small jerks of fear.

It was better this way. She’d never be in danger. Never know what he had allowed to come creeping into his life, diseased and dreadful.

“That’s why, Susan,” he said to her departing car. “I can’t let you be a part of him. Of this whole situation. Oh, God. Take me with you.”

With a sob, he let the curtain fall back into place and knew his life was over.
Posted by Kim Smith at Thursday, January 28, 2010

This was great, tho I'm not surprised. Your writing always entices me, Kim. You have a great gift. I did want to make sure you know it wasn't me who gave you the bug. I swear. I'm on day 17 and still not 100%. Slept 10 hours last night and still had to have a nap this morning. Here's hoping we're both feeling well soon.

Wow! This is fantastic, Kim. I love surprises - especially dark ones that make me want to cry... :-)

Oh Joylene! I hope you are tip top soon. NO cyber germies from me to you either!

i'm a little late getting to this, and now I'm sorry I missed it the day you posted it. Kim, your writing has always appealed to me because of your ability to make it all sound natural and real. You have the gift of "writing like you talk," and I love it! You made us care about this poor heartbroken girl and the about to be broken man, in a very short time! Kudos!

This website is quite valuable to us. Thank you so much for taking the time to write about this. Some of the examples in this post assist me in applying what I've learned in my daily life. amazing Each and every issue has been thoroughly covered by you like assignment writing service. I hope you will continue to write articles that will assist us in our everyday lives.