After you've worked with a certain group of characters for a long time (say, *cough* ten years *cough*), they tend to take on a little initiative of their own. Recently, I've started plotting the finer details of the fifth book in my House Phoenix series while I'm working with my editor on the first, and the release date draws near.

I received an interesting message the other day, and decided to share it with you. Technically, I don't have Gabriel's permission to post this -- but I'm sure he won't mind letting everyone know exactly how he feels.

I hate you. I hate you with the power of a thousand fiery suns. I really, really do. I'm not usually this verbose – after all, you did kind of limit me in the vocabulary department – but I feel this needs to be said: The depths of my hatred for you cannot be contained within the boundaries of my character. Also, I am a weak fool who cannot think for himself, and I whine like a mule.

(Knock it off, Jenner. I can write my own letter.)

Anyway....where was I? Oh, right. I hate you. Have I mentioned that? It wasn't bad enough that you gave me a horrendous backstory. My father beat the crap out of me almost every day? Seriously? And I provoked him into doing it sometimes so he wouldn't beat my sister? Why in the hell would you do that to me? I mean, I'm a nice guy and everything – but Christ, how much beating is one kid supposed to take? By the way, thanks for the quick temper, too. That really helps, you know?

But the beatings didn't end there. Oh, no. You had this huge underground street fighting organization kidnap my sister and hold her for a ridiculously large ransom, and made sure the only way I could get her out was by getting the crap beat out of me. Again, and again, and again. You must really like watching me bleed, man. You are one sick puppy. You're almost as bad as Jenner.

Oh, crap. You created Jenner, too – so you're probably worse than him. No, that is not a compliment.

So all right. I get the crud kicked out of me on a regular basis. Fine. At least you let me get better at it eventually. I mean, leaving out the fact that this crazy Mendez guy wants to kill me, and the crooked cop Wolff is trying to get me put away forever, and the she-man wants me for a sex toy...no, wait, let's not leave those out. Let's add them to the endless list of reasons I hate you. Seriously, I do NOT want to sleep with Dell.

Every time you do something nice for me, you make something else worse. Way, way worse. I had nobody. Eventually you gave me a friend. For a few minutes I only had one foot in hell.

And then you made me fight him naked. NAKED. In front of a thousand people!

Come ON, man. Gimme a break, will you? On second thought, don't do that. You've already given me enough breaks. I think one of my ribs is still cracked.

Look, could you please just stop writing the series? I know what you have planned for me, and I don't like it at all. He'll probably kill me. You know that's not outside his capabilities, don't you? I mean, you made the man. You have to know what he's like. I am enjoying this immensely. Please continue to bring pain into my life.

(Jenner! Give me the damned laptop back.)

I hate you. I hope you get hit by a van like Stephen King. And while you're lying crippled in a hospital, I'm going to become a writer, and I'm going to write a series about S. W. Vaughn, who was kept in virtual slavery throughout childhood and beaten at least three times a day, and then is forced to join a troupe of medieval reenactment players as the prisoner who is tortured constantly and kept chained in a little box outside of shows. And I'll sell a hundred times more copies than you.

(Damn it, Shiro, you're supposed to be on my side here. Chump Boy? You really need to learn better slang...)

BROKEN ANGEL: Kicking the crap out of Gabriel Morgan from page one.

Get your kicks in. 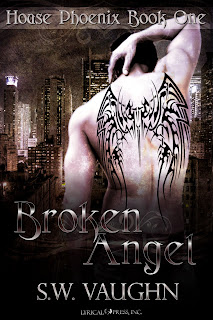 I'm really busy right now, but not too busy to break both your legs. And then make you fight on them.

LOL! SW, I LOVE this. I've been enamored with BROKEN ANGEL (and the series) since you gave me the first draft to read when we met at my Syracuse book signing. Remember that? I've loved your characters since then - ALL of them - and in spite of the nightmares Jenner inspired, you sure ended up throwing me some major, whalloping curves. The series is amazing, and I'm delighted that it's coming out soon and that the whole world will get to experience the thrill of the ride!

Don't you just hate it when characters misbehave? LOL

This is terrific! And did I mention you scare me, S.W.?

It's no wonder we have so much trouble saying good bye to these characters. They make us reacte.

ROFL!!!!!! And I thought Shannon, Sam, and Marta and I were the only ones who fought!!!