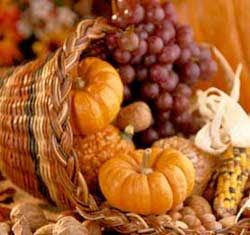 November is the month where we all count our blessings. According to Wikipedia, :
“Thanksgiving Day is a harvest festival. Traditionally, it is a time to give thanks for the harvest and express gratitude in general. It is a holiday celebrated primarily in Canada and the United States. While perhaps religious in origin, Thanksgiving is now primarily identified as a secular holiday.
The date and location of the first Thanksgiving celebration is a topic of modest contention. Though the earliest attested Thanksgiving celebration was on September 8, 1565 in what is now Saint Augustine, Florida[1][2], the traditional "first Thanksgiving" is venerated as having occurred at the site of Plymouth Plantation, in 1621. The Plymouth celebration occurred early in the history in one of the original thirteen colonies that became the United States, and this celebration became an important part of the American myth by the 1800s.
Today, Thanksgiving is celebrated on the second Monday of October in Canada and on the fourth Thursday of November in the United States. Thanksgiving dinner is held on this day, usually as a gathering of family members and friends.
Well, I don’t know about all that, but I know it’s my favorite holiday, and I am always thankful to be in America, in the South, and in my family on that most honored day.

I love my country, and I really love my region (especially the food at Thanksgiving!) but being in my family is the best of it all. My kids are pretty well grown now with the youngest about to depart college with an undergrad degree, the eldest about to deliver a new baby, and the two in-betweens surprising us with their very-grown-up lives.

I also thank the Pilgrims. If it weren’t for them, I would never have taken up writing. Yes, it is true, my first story was about the Pilgrims in Plymouth and how they celebrated Thanksgiving. My mother, God rest her soul, saved the whole thing and gave it to me years later when I was an adult expressing the desire to write, with the advice to remember my humble beginnings.

Boy, do I remember them! And I am very thankful as well, that my humble beginnings were about something like Thanksgiving.

I hope everyone has a great holiday!

Kim Smith is the author of the zany mystery series featuring Shannon Wallace. She has penned several contemporary romances including the recent release Love Waltzes In. You can download her work at http:///www.redrosepublishing.com
Posted by Kim Smith at Thursday, November 26, 2009

Email ThisBlogThis!Share to TwitterShare to FacebookShare to Pinterest
Labels: thanksgiving