Taking Pleasure in the Little Things: Geese, Plums, and Haiku 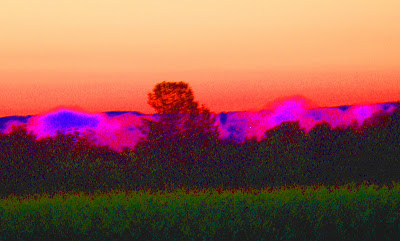 Last week we talked about writing outside ones comfort zone. Many of you commented (thank you!) with examples of experimenting or taking challenges: sliding from poetry to screenplays or from novels to haiku. Most agreed it's a good thing to stretch ones writing muscles in new directions.
As you may know, I'm a novelist. I sit down, and books pour out of me. They rattle around in my head, begging to be released. Not that they don't require plenty of hard editing after that, but that's my comfort zone. I've dabbled in haiku before, and enjoyed it. But I'm not especially good at it. Even so, I decided to give it another try after our discussion last week.
On Tuesday, I drove to work along River Road, just south of Scottsville, NY, in an area rich in scenery. I've taken many lovely photos on this bucolic stretch of country road. It features magestic trees, rolling cornfields, foggy tendrils from the river, and misty sunrises.
About half way up, I saw my favorite white geese. They walked four abreast, each one just a step ahead of the next, so that they formed a diagonal, like one half of the "V" formation when birds fly overhead. They stopped in the fog in front their stone farmhouse, flanked by beautiful alfalfa and cornfields. Behind, the woods lined the background and beyond that, fog rose from the Genesee River.
When I passed, they stretched their necks up high and stared at me. I laughed out loud, it was so funny. And just plain gorgeous.
(Now, see? That's the usual way I would write about this experience.)
This wonderful, delightful moment in time is a good example of what I mean by "taking pleasure in the little things." I say this all the time, and probably drive people crazy with it. But it's how I live my life and it also helps enormously when coping with hardship.
My mood soared. I passed through patch after patch of luminous fog. The sun peeked through the treeline. I got a few shots (when I wasn't being tailgated by a couple of cowboys), but mostly the beauty filled my soul and I just soaked it in. Such great fodder. Such inspiration.
During the rest of the commute, I worked on this haiku.
(the photo is awful - I tried to catch these little guys this morning, but it was VERY far away and the sun hadn't come up yet.) 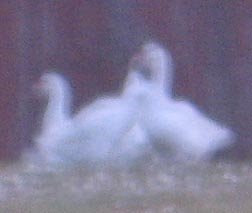 Four white geese
Beaks dripping with dew
Stare at me
I tried to make the last line (three syllables) have a punch. I tried "follow me," "stand in fog," "raise necks high," and more. Many more.
But the fact of the matter was, these geese stared right at me. As if I were disturbing their quiet morning. How dare I?? They seemed curious and slightly indignant.
I thought of replacing "me" with something less... I don't know... personal. Or less simple. Something more artsy, like "stare through fog" "stand in sun," "turn away," etc. But nothing seemed to match the actual scene better. So, I stuck with it, simple as it is.
***
I've also been enamored with plums this year. My four plum trees have gone wild, hanging heavy with so much fruit that I've been constantly cooking up plum sauce from my Stanley, Shiro, Green Gage, and Santa Rosa plums. Mmmm.... It's really good piping hot over Amish friendship bread or french vanilla ice cream. (just slice, remove pits, add a little water, boil til soft, and add sweetener of choice.)
So I worked on another haiku to try to capture my delight with this fruit. I'm not sure if I got it, but here are some photos to help.

See that coating on the skin? I love when you rub it and it suddenly reveals a deep purple or blue, all shiny and just begging you to bite into it. I wanted the second line to reflect that coating. Words that crowded my head were "dusty," "musky," "fingerprinted," "fogged," "muddy," "murky," and others.
I tried and tried to find five syllables to describe that lovely coating that reveals such beauty beneath when rubbed on ones favorite teeshirt. ;o) So, I ended up with "skin coated with dusk," even though you can't really coat skin with dusk. But - dusk is dark, murky, and sometimes foggy. So I took a few liberties. Did it work? I'm not sure. 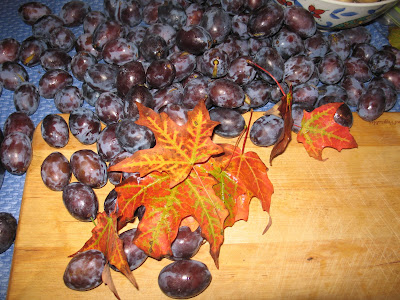 Here are some Stanley prune plums that I picked to make sauce with. (plus a few leaves Julian brought inside to "decorate the house." So cute!)

I washed them, pitted them, and cut them in rough chunks. Aren't they gorgeous? The Stanley plums are green inside before they soften, and cook up nice and tangy.

Look at this delightful ruby color they turn into when they're cooked. 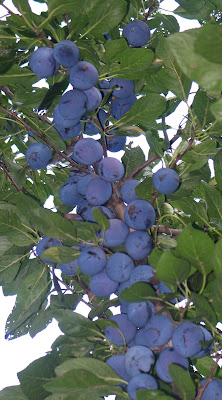 There's very little left on the tree - on the highest branches. I must get the ladder out to snag these last few beauties.

Meanwhile, as you go about your daily routine, stop to take a look at the little things around you. Take pleasure in them. Take photos. And maybe write a haiku or two. ;o) And if you love to write, remember to write like the wind!

***
Aaron Paul Lazar writes to soothe his soul. The author of LeGarde Mysteries and Moore Mysteries savors the countryside in the Genesee Valley in upstate New York, where his characters embrace life, play with their dogs and grandkids, grow sumptuous gardens, and chase bad guys. Visit his websites at http://www.legardemysteries.com/ and http://www.mooremysteries.com/ and watch for the fourth book in the LeGarde series, MAZURKA, coming in fall 2008 from Twilight Times Books.