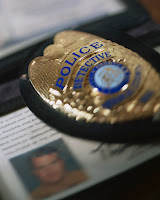 ... in the crime/mystery genre.


Okay, now that I have your attention. My work has been described as crime/mystery, suspense, and hardboiled. My readers expect to see action, but not in the bedroom.

Many questions ran through my mind when I started the series. Never having written in the genre before SILENCED CRY, I wasn’t sure how risky it would be to toss a love interest into the book. What I knew for certain was the character of Sam Harper was going to be 3-D. To me, that meant allowing him to feel a wide range of emotions; everything from fear, anger, and suspicion to love and desire. I didn’t want Harper to be just another cop on the beat or have crime be his only focus.

In real life we have work environments and home; family and friends. They all tug at our time and vie for our attention. When interests collide, there’s friction. Add love to the mix and your world does a flip-flop. Why? Because sexual attraction happens—thank God, but it’s seldom expected, rarely convenient and not always smart.

So just how much romance is acceptable in a crime novel? In my estimation, enough to add to the plot without taking it over. Enough to add conflict, especially if the love interest turns out to be deadly attraction. Enough to keep the pages turning and the plot moving toward a tight ending.

After reading SILENCED CRY a reader wrote to say that one of the things she enjoyed about the book was the way I handled the “sex scenes.” She went on to say that although she thoroughly loved the sexual tension between the thirty-two-year-old homicide detective, Sam Harper and one of the other characters, she was pleased with the lack of graphic sex scenes in the book. So where’s the tension, you ask? In Harper’s head -- his thoughts, his body language, the way he looks at her, what he dwells on. We experience it through his eyes, his fear to commit, and his curiosity about her intensions. The insinuation of an attraction is there, but the details are left to the reader’s imagination.

* * *
Marta Stephens writes crime mystery/suspense. S ILENCED CRY is available online at familiar shops such as all the Amazons (special price now), Barnes & Noble, Borders, Books-a-Million, and Powells. Other locations include, but are not limited to those listed on her website.

Look for THE DEVIL CAN WAIT November 2008.
Posted by Marta Stephens at Tuesday, September 09, 2008

Sex is fun, and a part of being human. How graphic should it be described in a book? It really depends on the characters in the story, and the story itself. I have read many sexual encounters in fiction ranging from "hinting" that it occurs all the way to the other end of the spectrum of a play by play sexual act. I dont think that I have ever been offended by one. After all sex is full of emotions we have all experienced. In crime fiction, I can see where details are necessary if the sex involves the plot. I can also see where Non-sex such as rape would need to be described graphically if necessary for the accomplishment of the story. I guess it all boils down to who your target audience is. I wouldnt want graphic descriptions unless I was sure the readers were adults but who can gaurantee that? Sex will always be a part of peoples lives. No reason for shying away from it. And it can be a great tool to keep the reader interested also.
edwardsthegreat

I've had the great pleasure of having seen an advanced copy of The Devil Can Wait, and am crazy about the Sam/Jennie scenes in this book. They are so well done. The sexual tension is tantalyzing, without being overdone. Very tasteful, yet full of intensity that drives the book forward. Fast. I can't imagine this book without the romantic aspects. It is an essential plot element, as well. Thanks, Marta, for a great piece!

Wise words. :-) Personally, I love a well-done "closed door" sex scene. It's so much better when most of it's left to the reader's imagination.

I agree with you and s.w. vaughn, omitting sex from the story completely would take away from a source of emotional tension, but leaving the graphic parts for the reader to fill in makes it far more enjoyable. I'm about to write such a scene for my current novel and I'm struggling with the right balance. Your post is helping me focus on the way to do it.

Hi everyone. Glad to know we all like a spark of romance in our stories :)

Chad, I don't know if your protag is a man or a woman, but since mine is a man (and I'm not) I don't mind telling you that it's been ... interesting looking at sex and romance from his view point.

Although men and women act or maybe express emotions differently, I think that the core emotion--the feeling you experience at the point of initial attractionis the same for both men and women. That's the emotion I try to tap into.

Think back to the first time you saw the love of your life--the excitement, the fear of rejection, (o-o-o don't want to look too interested--keep them guessing) more excitement. Love is a hair-yanking crazy yet wonderful feeling. We've all been there, now all you have to do is put it into words. See...it's easy! :()

I'm one who loves it both ways...In my own work, I've done it both ways. My first book has some pretty graphic sex in it. Most of it is between the married couples, though I have to say that were I to write this book again, I would handle it a bit differently. I'd leave more to the imaginiation. But I also feel that a writer can be "a fly on the wall" and write what he/she sees. It all depends on the delivery. There was, what I call "beautiful sex" that is loving, and from different perspectives, too, depending on the relationship, the age of the characters, and so forth. But I also have one chapter that is just ICK--because the characters are the "bad guys" and they're just plain nasty. Anyway, my latest works are handled a bit differently. There are two reason for that: I've matured as a writer and I think a book can have broader appeal if there ISN'T as much graphic sex.

Personally, I'm not offended by much of it. But even with some of my favorite authors, the sex can be a bit overboard, especially where it crosses into what I consider to be kinky--don't want to read it, and don't want to think about people that I love(story characters whom I have adopted into my group of literary loved ones)doing that stuff. Sometimes, that is too much information.

I think that as readers and writers, we have to think of ourselves as consumers, and think of what we like to spend our valuable reading and writing time doing.

Sexual tension is, in my opinion a very powerful and enticing element to any story.

Sound like you hit the nail on the head, Marta. Bravo!