The Starling: A true story by Aaron Paul Lazar 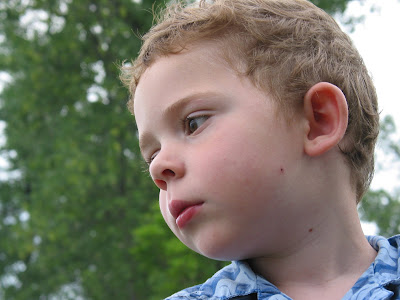 My grandson and I rode the John Deere lawn tractor, pulling a cartful of leaves and sticks toward the burn pile.
“Papa!” Julian said. “A birdie! Don’t run over it!”
I slowed and turned off the tractor.
“It’s okay, buddy. We didn’t hit it. But I think he’s already dead.”
The starling lay on its side; its plumage glistened blue-black in the hot sun; its eyes dulled.
“Why’s it dead?” Julian asked.
“I don’t know. Maybe it was a very old bird.” Or maybe it hit the window.
“Did someone shoot him?” he asked. His eyes filled with unshed tears. He climbed down and leaned over the corpse.
Shooting had become a big deal in his life and I couldn’t figure out why. Everything he picked up that remotely resembled a gun was aimed and “fired” at bad guys. Empty paper towel rolls, dried perennial stalks, plastic table legs… it didn’t matter what it was, it turned into an instrument of death.
“Did they…did they shoot him?”
“No, no. I’m sure that wasn’t it, honey. I think he was just old,” I fibbed.
Allouette sat on the porch, eyeing us with her jade green eyes. Her fluffy black and orange tail plumed up and down–a bad sign for a cat.
Had she killed the bird?
I shrugged off the thought. Normally her prey was delivered neatly on our doorstep with a cacophony of catcalls.
We got back on the tractor and headed for the burn pile.
“Papa? Is the bird dead?” 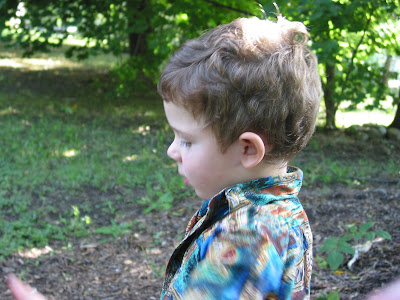 I nodded, kissed the top of his curly hair, and answered again.
“I’m afraid so.”
We pulled up beside the pile. “Okay, key man. Turn her off.”
“I’m the key man,” he smiled, reaching for the key. When the rumble of the engine faded, he turned his face to mine.
“Why did he die?”
I sighed. This one wasn’t going away. “I’m not sure, Jules.”
I grabbed the rake that leaned against the cottonwood. Armful by careful armful, I tossed the dried twigs and leaves onto the crackling fire. The dead leaves floated up like ghostly bats, fluttering on the breeze as they rose to the heavens.
“But what will happen to him?” he asked plaintively.
I didn’t tell him that I planned to scoop it up with a shovel and toss it into the back woods.
“Come here, buddy. Let’s sit for a minute.”
I rested the rake against a tree and offered my hand. He took it and followed me to the glider.
“Uppy?”
I smiled and lifted him to my lap. “There you go. You comfy?”
He nodded, but his brow furrowed again. “But the birdie…”
An idea sparked in the back of my mind.
“Would you like to bury him, Julian? Would that be a good idea?”
His eyes lit up with hope as he nodded his head vigorously. “Yes! We should bury him. But…” His eyes scanned the property. “Where?”
I pointed toward the woods that curved around the back of the yard. “Over there. Come on, let’s get our tools.”
I set him down and headed for the barn. He scampered beside me, chattering all the way. “Can I use my shovel, Papa?” he asked. He ran inside and lifted his plastic shovel off the nail.
“Sure. I’ll bring my shovel, too.”
I grabbed the spade and we walked back to the tractor. After throwing our tools in the cart, we drove back to the lawn where the starling lay. While Julian observed, I scooped the poor bird onto the blade, laid it in the cart, and got back on the tractor. Julian jumped up on my right knee. “Okay. Key man. Do your thing.”
He turned the key. The engine roared to life. He looked up at me, beaming. “You’re the potato man.”
I laughed out loud. We’d just planted three long rows of potatoes that morning. “I guess I am.”
“And I’m the key man.”
“Right. Okay, let’s head out. You wanna drive?”
My three-year-old grandson looked at me with wide eyes. “Drive?”
“Sure. Here. You can hold the wheel.”
He moved closer to the wheel, grabbed it eagerly, and almost plowed us into the lilac bushes.
“Oops. Turn it left, buddy. That’s right. Now straighten it out. Okay. Okay, good. Now right.”
He “drove” us to the woods and automatically turned off the key when I braked near a row of old apple trees. Quickly, he dismounted and ran to the bird in the cart. I hurried to his side.
“Don’t touch it!”
He took a cautious step back. “Okay.”
I slid the bird onto the ground, then found a soft spot beneath a gnarled apple tree. “This looks good.”
I began to dig. It took only a few minutes. The dirt was typical of our land–soft and loamy. Julian helped, then I lowered the bird into the hole and covered it. He patted the dirt on top. I considered fashioning a cross to complete the burial, but his little stomach growled.
“I’m hungry, Papa.”
I guess you are, sport. It’s almost time for supper, anyway.”
We put our shovels back in the cart, then headed to the barn. My key man turned on the engine and steered with my help all the way back. After parking the tractor, we hung up our shovels and headed back inside.
“Will he come alive again?” Julian asked. His eyes darted to the woods. “Will the dirt make him better?”
“No, honey. When you die, it’s forever.”
A sudden thought flashed through my brain.
I don’t want my grandson to think it’s really over when we die.
I kneeled beside him.
“His body is dead. It will stay under the ground. But his spirit is free now. He’s in birdie Heaven.” I flinched at the words, realizing I was pushing it. Although embarrassed to admit it, I actually pictured my deceased cats and dogs in Heaven, frolicking around my father and grandparents, waiting for me to join them someday. I truly believed we’d all be reunited when we passed. But I hadn’t actually considered whether birds had souls. Somehow, the idea had appeal. If Julian could begin to understand the concept of Heaven and spiritual beings...
I tried to explain about the body and the soul during dinner. I used images of an angel, which Julian had seen, to represent the spirit. I don’t think he completely understood. But then again, neither do I.
The next day, Julian and I were outside at the burn pile, throwing on the deadened limbs from our plum tree.
“Can we go see the bird again, Papa?”
“We can’t really see the bird, honey. He’s buried.”
“But we can dig him up!” he said. “Maybe he’s alive now!”
I explained–again–while we drove to the grave.
“We don’t dig up the buried body. It won’t come alive again. It stays there.”
“But he’s happy, right? He’s in Heaven with God.”
I looked down at my little pal and grinned. A surge of love blossomed within me. “Yeah. That’s right, honey. He’s happy now.”
We walked hand-in-hand back to the house as he chattered about life and angels and Heaven. I gripped his soft little hand and sighed with joy.
Yeah. I love being a grandpa.

Aaron, this is such a sweet story and what a great opportunity to talk to your grandson about a topic most shy away from. Thanks so much for posting it.

By the way, about pets, I've heard anything is possible in heaven.

Aaron...I have commented on Gather about this lovely piece...so touching and genuine. Two lucky guys!

Thanks, Marta, SW, and Pat!

Glad to see this online at a blog as well. Do you all have Digg available on this site? If so, I'll dig it.

You may absolutely "Dig it." Check out the link upper right hand side of the blog.

Hi, Jane! So nice to see you here, and I'm looking forward to your guest blog on March 24th!