Welcome to Murder by 4!

MARY: Mr. Stone, I hope you don’t mind being interviewed because of your connection with Gus LeGarde. It appears he’s a bit busy with his large family and gardens right now. It’s not that we aren’t interested in you, Mr. Stone, but Professor LeGarde has been featured in quite a few mystery books lately that have been piquing the interest of local readers.

OSCAR: I most certainly object to being interviewed for who I know, not for who I am (smiling). However, while my life as a historian and nature photographer is decidedly fascinating, it isn’t newsworthy. And Gus has been through some hair-raising adventures over the past few years, which do warrant discussion. We are all rather proud of him, and think of him as quite the hero, don’t-you-know?

MARY: I’ll bet. Well, let’s start at the beginning. How did you meet Gus?

OSCAR: Gus LeGarde and I have been friends for the past few decades. When Gus’s parents died within a few years of each other, he went through a serious depression. It was all my wife Millie and I could do to help him get through it. Just after Gus’s mother died, our son, William, was killed in action in Viet Nam. Millie and I were distraught, and Gus and his wife, Elsbeth, kindly drew us into their lives. That’s when we basically “adopted” each other.

MARY: I’m sorry about your son, Mr. Stone. I’m sure my readers would join me in thanking him for his service to our country. Now, let’s talk about Elsbeth. What’s the story there? The author, Lazar, paints quite a picture of her murder.

OSCAR: Ah, Elsbeth. I never knew a more fiery woman. She was beautiful, dark, wild. And, oh, what a pianist. She was about to begin a worldwide tour as a concert pianist when their daughter Freddie was born, and she gave it all up to stay home with the baby. Of course, that was almost thirty years before she was murdered.

MARY: What about the murder?

OSCAR: It’s an exceedingly unpleasant topic. Normally, I wouldn’t discuss such private issues with you. However, since Gus has authorized the series to be published, I suppose it’s acceptable, in this case.

The short version is that Elsbeth contracted cancer - it settled in her temporal lobe. We went years thinking she had a mood disorder, like bipolar. There was even a diagnosis of schizophrenia. She went through a number of neurologists. When the slow growing cancer was finally detected, it was too late. And the suicidal depression, caused by a tumor that affected the part of her brain that controls these things, overwhelmed her many a time.

We all thought she’d jumped off the cliffs of the Letchworth Gorge because of it. Later, of course, we discovered that ******** (withholding to avoid plot spoiling) , pushed her. He was trying to cover the embezzlement of her inheritance. He found her depression a convenience - especially since she’d tried suicide several times - and it was well documented. I believe Mr. Lazar refers to this in his accounts of Gus’s life throughout the series. It was awful. Just awful. We all thought she’d really jumped, until ******** was later revealed to be a monster. He’s still in jail, of course. Thank God.

MARY: What about Gus’s house? Is it really as large and homey as Lazar paints it?

Oscar (laughing): It is. We gather on Sundays for Gus’s family feast. He’s an amazing chef, with a talent for comfort food with a gourmet twist. He has a flare for it, that’s for certain. One thing Lazar may misrepresent is the cleanliness of their home. Gus hates to do dishes. And the great room is often covered with toys and evidence of his grandchildren’s forays into mischief.

MARY: Who is “we?” Are all the people in Lazar’s books really in Gus’s life?

OSCAR: Oh, yes. All of them, and more. Well, let’s see. Of course Millie and I are always there. There’s Gus’s new wife, Camille, and her daughter, Shelby. She’s going to be quite the vocalist, let me tell you. But I digress. Camille’s mother, Madelaine, is Gus’s secretary. She’s romantically involved with Officer Joe Russell, who’s a wonderful lawman with a very healthy appetite. They live in Camille’s old Cape Cod, just down the road. Gus’s daughter Freddie, now divorced from Harold, lives with Gus and Camille with her three children: Johnny, Marion, and Celeste. They are all cared for by the most capable housekeeper and nanny, Mrs. Pierce, who stayed on after caring for Elsbeth in her final days. Of course, that was five years ago now, although it seems like just yesterday.

MARY: What about the giant?

Oscar (chuckling): Oh my goodness! I forgot about Siegfried. Of course. Our gentle giant. Siegfried was Elsbeth’s twin brother, Gus’s brother-in-law. Dear Siegfried has suffered from great challenges in his life, not the least of which was a childhood boating accident that left him slightly impaired. But he’s a veritable gem. He lives in the carriage house beside Gus’s barn, works at Freddie’s veterinary clinic, and helps out around the property by watching the children and chopping wood. Oh, and he also tends the barn animals, two horses, dogs, chickens. Siegfried has shown amazing courage on more than one occasion, and has saved Gus’s life several times. To be fair, Gus has done the same for him. It’s been rather crazy around here lately. Too many villains invading our peaceful little town.

MARY: How accurate are Lazar’s books? I mean, regarding the actual plots. Does he embellish? Or are they relatively factual?

OSCAR: They’re quite factual. I have read all of Lazar’s books, including his rough drafts for the yet unpublished works. He honors me by including me in his “inner circle” of readers and critique partners. Actually, my wife Millie and I do this together, and we do find plenty of typos. He tends to get carried away in the stories, and often forgets important things. Like my camera. He almost called it a Nikon in the first book, and it’s a Leica! I’ve had to correct him on a number of items. But for the most part, he and Gus spend a lot of time together going over the actual events and timelines. Occasionally he waxes a bit poetic, delving into the descriptions of our valley in flowery detail. I would be more to the point, don’t-you-know? But I suppose it works. His readers seem to enjoy the books.

MARY: I’ve read the first two books in the series, Double Forte’ and Upstaged. But you’ve read all eleven? Twelve? What’s your favorite, so far? And when can we expect to see it in print?

OSCAR: Oh, my. That’s a tough one. I have soft spots in my heart for all of Lazar’s books. I love Firesong, because that has such lovely historical connections with the Underground Railroad. And Counterpoint gives a great account of the ice storm. Then again, Mazurka is a waltz through Europe, rather delightful. Of course, the ones that feature me are probably my favorites, but don’t forget, three of these twelve books introduce another set of characters. Sam and Rachel Moore, who live not far from us, agreed to let Lazar document their recent adventures. Rachel is very brave, a strong woman. She has MS, don’t-you-know?

MARY: You didn’t tell me your favorite book, Mr. Stone.

Oscar (laughing): You must forgive the aging brain of an octogenarian. I tend to ramble. All right then, if you are going to push, I suppose I would choose Tremolo. I love the way Lazar pits the innocence of Gus’s childhood against the evil of the thief and murderer he faced in Maine as a child. And the descriptions of the Maine lake are just invigorating. Quite pristine and makes me imagine the aroma of pines, don’t-you-know? That book was just released in November 2007, I believe.

Now, speaking of publishing, this young man has had a devil of a time finding a publisher with deep pockets. If you have any connections with powerful NYC publishers, you must certainly put in a good word for him. He’s a good fellow with a large family of his own, you know. He needs a nice advance.

MARY (laughing): I certainly will, Mr. Stone. And I understand how difficult it is to break into the business. I have a few novels of my own, and understand the predicament all too well.

Well, thank you for your time, Mr. Stone. Perhaps we’ll talk again, and next time I’ll ask all about your work as East Groveland historian.

OSCAR: You’re quite welcome, young lady. And I’d be happy to regale you with the tales of long lost precious documents and local grave robbers. But we’ll save that for another time. I need to let Tinkerbell out to go potty. She’s dancing at the door. Drive safely, now. And watch out for villains. 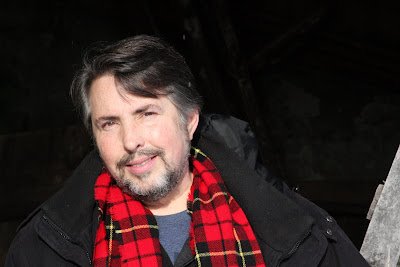 Now Oscar is a character I haven't met yet. It's interesting how the interview of one character is so telling of another, in this case, Gus. Nice one!

Thanks, Marta! Oscar is one of my favorite characters - based on my maternal grandfather. He makes a brief appearance in Tremolo as a younger man (he's the one who gives the slide show and takes them to the fairgrounds), but he's featured in Firesong and Virtuoso, which are patiently waiting in the publishing queue. ;o)