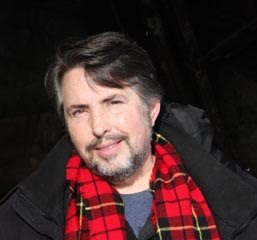 MS: Aaron, you have four Gus LeGarde Mysteries published: DOUBLE FORTE (2004), UPSTAGED (2005), and MAZURKA (2008). These books reflect the character of Gus LeGarde at varies points in his adult life. Yet, your third book, TREMOLO: CRY OF THE LOON (2007) portrays Gus LeGarde at the tender age 11. What prompted you to depart from the format you established in the other three books?

AL: I was a supremely happy child, Marta. And some of the most delightful times of my youth happened while spending summers at my grandparents’ camp in Maine. Even though the last time I was there was in 1961, when I was nine, the memories constantly invaded my brain, begging to be documented and let out. To tell the truth, when life got really tough, I’d frequently picture camp – particularly the swing my grandfather made for me. I’d imagine jumping from the swing, running down the sandy hill to the dock, and jumping into the cool green lake. It was a scenario that I’d frequently taken part in, in real life as a child, and there was something so immensely refreshing about the event that it popped into my consciousness repeatedly. To be frank, it was probably driven by a need to self-comfort during traumatic times.

MS: What challenges did you encounter with respect to the writing the same character in a younger voice?

AL: To tell the truth, Marta, I found it the most natural thing in the world. I just put myself back into my own childhood brain and wrote it as I remembered it. Of course, the villains and chase scenes, etc. were thankfully fictionalized, but I just pictured how I’d react as a child in these scenes and wrote it. I penned the original book in about 12 weeks – with little editing done afterwards, except for typos and one chapter I inserted. 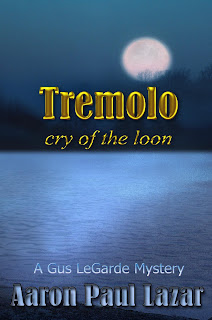 Of course the real answer to this question is that I’m really still 11 years old inside, and it was my own voice that took over for TREMOLO.

MS: Every author has their own “ritual” so to speak that they follow when the sit down to write the next book. How do you know when the next one is about to emerge? What process do you follow? Are your plot ideas triggered by specific incidents or do you allow them to simmer a while before you dip your pen in the inkwell? (Sounds so much more eloquent than “pound on the keyboard” doesn’t it?)

AL: The first five or six books came out of me with a reckless rush. It was as if memories from my past begged to be recorded and stroked back into “reality.” Many of the scenes from the books originated from my life. The fear of losing my wife made me imagine how it would feel to lose a spouse. So, when Gus mourns for Elsbeth, the feelings are rooted in similar fears of loss in me. Also, I used my father’s death and my feelings of desolation during that period of my life as triggers for the agony Gus felt. There were (and are) many stories waiting to be let out – so I just kept writing them as they tumbled forth.

Most of the time, however, I collect a loose bunch of ideas and go forward with them – no outlines or chapter breakdowns are written ahead of time. For example, when I wrote VIRTUOSO (the fifth LeGarde mystery, in the queue to be published), I knew I wanted to start with a small plane crash in a field near Gus’s house. I knew he would save the pilot, who ended up being a childhood friend with a deep secret. It would be my “art” book, including one theme that dealt with a fake Monet. I envisioned a historic mystery that included Gus’s ancestors and an artist named Daniel Ridgeway Knight, and a scandal involving singers at the Eastman School of Music, which my daughter Melanie attended. Of course, there were no tenors like the one that tried to seduce Gus’s step-daughter, Shelby, in real life. And last of all, I pictured a chase scene at the Metropolitan Opera House and Central Park. That’s how it started, and when I began writing, things gelled, new ideas came to fruition, and deeper themes emerged.

MS: Your approach is probably closer to what most writers do. The stories or part of our stories are usually sparked by something in our hearts or background. I love every detail that you’ve written into TREMOLO. Common every day things that only those of us who lived through or grew up in the early sixties would remember (i.e.: the feel of a 5 cent recycled green pop bottle against the lips, “...soft lavender sweater with small pearly buttons was worn backwards ... on her feet were black Capezios...”). How much of the book was drawn from memory? Were there parts that you needed to research?

AL: Every little detail came from my memory. We had those green pop bottles on the porch at camp, and I can still feel the bottles against my lips. I remember the girls in school wearing those Capezios and sweaters turned around backwards. Why, I’ll never know. But small details like that stick in my memory. There was one thing I had to look up, however – it was when the Beatles songs, etc. were released. I lived through the eras, adored the Beatles, and followed their lives with intense fascination, but I couldn’t remember what year which song came out. I also did a little research on the mystery woman in cabin 15, but mostly it was a fantasy meeting with her, a tribute of sorts.

MS: Anyone who knows you, knows your devotion to your family. What legacy do you hope to pass on to your children and grandchildren through your writing?

AL: What a great question. I guess I hope that someday my family will remember me through my books. They’ll read about Sam Moore’s gardens (in Healey’s Cave and the sequels to come) and remember the same details from my gardens…I hope they’ll remember the mock orange bushes and their heavenly scent, the Japanese Knotweed colony that I battled one whole summer, or the yellow tomatoes I grew and tended each season. I’ve tried to capture most of my great family feasts in Gus’s books, so perhaps they’ll recreate them some day. But most of all, I want them to relate to a passion for life, for finding the truth, for being strong and facing evil, for loving one another, for being brave and honest and trustworthy, and for communing with nature to find joy and to maintain good health, and for being good stewards of the land.

MS: Please tell us about your other books and what’s in your publishing future?

AL: I began DOUBLE FORTÉ late in 1997, but didn’t really get serious about it until a few years later. I rewrote the whole thing in 2000, and then the writing bug bit. It bit hard, and I couldn’t stop. The stories just flew out of my brain and begged to be released. I wrote the final version of DOUBLE FORTÉ and the rough drafts of UPSTAGED and MAZURKA in one year, spending about three months on each. Since then, I’ve written TREMOLO: CRY OF THE LOON, FIRESONG: AN UNHOLY GRAVE, PORTAMENTO, VIRTUOSO, COUNTERPOINT, and LADY BLUES: FORGET ME NOT, the next books in the LeGarde mystery series. DOUBLE FORTÉ and UPSTAGED have been available since 2004/5. I just received my first 200 copies of TREMOLO in the mail today, and it’s official release date is mid Nov. MAZURKA will be released in May/June 2008.

I’ve also started a new paranormal mystery series, called Moore Mysteries. HEALEY’S CAVE, the founding book in “the green marble series,” will be released in June 2008, to be followed by the next two books in the series which are ready to go.


For those of you not yet aware about Lazar's latest book, TREMOLO: CRY OF THE LOON, here's a little to wet your interest.

Summer, 1964: Beatlemania hits the States, and the world mourns the loss of JFK. For eleven-year-old Gus LeGarde, the powerful events that rocked the nation serve as a backdrop for the most challenging summer of his life.

After Gus and his best friends capsize their boat at his grandparents’ lakeside camp, they witness a drunk chasing a girl through the foggy Maine woods. She’s scared. She’s hurt. And she disappears.

The camp is thrown into turmoil as the frantic search for Sharon begins. Reports of stolen relics arise, including a church bell cast by Paul Revere. When Gus and his friends stumble on a scepter that may be part of the spoils, they become targets for the evil lurking around the lake. Will they find Sharon before the villain does? And how can Gus–armed only with a big heart, a motorboat, and a nosy beagle–survive the menacing attacks on his life?

***
Aaron, I’m always intrigued and inspired by the story behind the story. It’s a pleasure and honor for me to have had a small part in your virtual book tour. Best wishes for all the success you most certainly deserve.
For more information about Aaron Paul Lazar and his books, please visit his websites at:
http://www.legardemysteries.com/ and http://http://www.mooremysteries.com/
Posted by Marta Stephens at Wednesday, March 26, 2008

Marta, thanks so much for bringing the Tremolo Virtual Book Tour to a lovely conclusion! Great questions, I enjoyed answering them. :o) If folks have any more questions for me, just drop a comment below. I'll check in from time to time to see what's brewing. ;o)

I'm so glad to see this wonderful addition to the virtual tour, such a great way to spread the word about a book worth noticing!

Thanks, Jane! So glad you stopped by. ;o)