In Sickness and In Health by author James Goodman 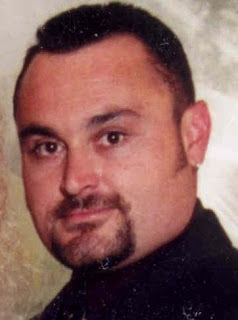 He graduated from Peach County, Georgia before joining the Army during Operation Desert Shield. He served with honor, pride, and a whole lot of spent shell casings during his three-year hitch. He attended college at Oklahoma State University and eventually received a BS in EET.

James resides just north of Tulsa, Oklahoma with his loving wife and their rambunctious son. They are an active family, and when they can pull James away from the keyboard or out of a book, they spend their free time wakeboarding, hiking, practicing mixed martial arts, riding motorcycles and taking road trips.

He writes suspense thrillers, horror, romantic horror, and even dabbles in dark YA.


In Sickness and In Health
by James Goodman

“Talk to me.” Marcus pleaded with his wife’s rigid back. “What have I done to deserve this?”

He stepped closer and his breath moved her hair. His hand hovered near her shoulder, the warmth of her skin wafting across his palm, but he couldn’t bring himself to touch her. She didn’t want him to, he was sure of it. He would only touch her, comfort her if she let him.

“I know you’re upset, Sabrina, but I can’t fix this if you don’t tell me what’s wrong.”

Her shoulders slumped, dropping away from his near touch. She crumpled, knees giving way, nearly dropping her to the floor. He cupped her elbows, guiding her to the sofa. She fell into the cushions. Her gaze drifted to the picture on the end table. He watched her intently as she picked up their wedding picture, tracing the curve of his cheek with her finger.

Twin trails of mascara washed over her cheeks, pooled and finally stopped just short of the corners of her mouth. The center of the stream was still fluid, but the outer edges already dried and flaked. She looked like she wore a painted mask. A mask of sorrow. A mask he never saw her wear before. A mask he never wanted to see again.

He reached to caress her cheek, but something in her eyes stopped him. He withdrew his fingers. His heart wretched, threatened to burst.

“How could you do this to me?” she pleaded, staring straight through him, through his soul.
He drew his fingers back further, clenching them, remorse transforming to trepidation, then to anger. “What has gotten into you?”

“It’s not good for me to talk to you anymore.” She swallowed hard, the muscles of her throat contracting and expanding. “I need get better. I need to be strong.”

“That’s ridiculous. The doctor said there was nothing wrong with you,” he said, flabbergasted by her implications.

“Why did you have to take me to that place?” she asked, her voice barely more than a whisper.

Her eyes unfocused, stared at the wall behind him. He turned to see a picture of her and her best friend, framed and hung from a nail.

“It was for your friend, remember?”

He wanted to help her, needed to soothe her, but her words frightened him. He was on the verge of losing her and he knew it.

She pulled the picture of him from her lap, kissed it. “We were at the party, and you had such a good time, but then, you always knew how to have a good time, didn’t you?”

“I’m not talking about the party, goddamn it!” Why is she doing this? Why does she want to hurt me?

“Oh, Marcus.” She sobbed, clutching the picture to her chest. “That other car, the red light—I can still hear the scream of our brakes. That sound…the sound of glass breaking and metal bending. The sound of our lives being torn apart.”

“I know it scared you and I said I’m sorry. So, I had a few too many glasses of wine. It couldn’t have been that bad or they would have thrown my ass in jail.” She was acting like he was a drunk, but he rarely drank and even when he did it was never to excess.

“I don’t think you ever even saw that other car. We just plowed right into it.” She fell to her side on the couch, staring up at the ceiling.

“But you’re alright. You came out of it with nothing more than a few scratches,” he said, moving to sit beside her.

“I can’t believe it’s over,” she managed before sobs overcame her.

“What do you mean ‘over’? I love you, baby. I would do anything for you. Please, don’t say it’s over,” he pleaded, dropping from the couch to his knees in front of her. “Whatever’s wrong, we can fix it. Please don’t throw everything we have away like this.”

She pulled the picture from her chest; held it at arms length above her face.
“Why did you leave me?”

“I didn’t leave you. What are you talking about? I would never—”

His words died in his throat as she slung the picture across the room, smashing it against the wall.

***
To read more works by James Goodman, please visit his website: http://www.goodysworld.com/ or contact him directly at jgoodman@goodysworld.com. He would love to hear from you.
Posted by Marta Stephens at Monday, March 31, 2008

James,
What a fantastic excerpt.
So full of emotion and intrigue. I'd love to read more.

What happens?
Does he know?
Does she?
Can she sense him?

What Happens? That is the golden question. :D

He knows by the end, when she tells him.

She doesn't know, she thinks she's just losing her mind due to her grief.

And she most definately can feel his presence.

Hi Ana. Thank you and I'm glad you enjoyed it. :D

Thanks for having me, Marta. :D and thank you for your kind words.

I loved The Sixth Sense and The Others, but I don't think I've seen Dragon Fly yet, I'll have to check that one out...

James, I thoroughly enjoyed your short story. As I mentioned to you earlier, it reminds me of the movie, "The Sixth Sense." I was so engrossed in watching the movie that after it ended, I had to watch it again to make sure I caught all the little clues.

Since then, I've watched it several more times. Other movies with similar themes that I've enjoyed are, "The Others" and "Dragon Fly." :) Thanks so much for posting on MB4!

It reminded me of the Sixth Sense too but I love the way you write, I hadn't guessed at all then 'ping' on the last line, you kept the suspense. :0

oh, that's right I have seen Dragon Fly. I totally didn't expect what he found near the end (trying not to throw out a spoiler.) I do love the surpise endings. :D

Thank you so much, Akelamalu. :D

James!! You are brilliant! What a fantastic piece. I had goosebumps.

Wow, thanks, Kelly. I really appreciate that.

well, i'm not gonna tell you what other people have told you it reminded them of hehehe LOL i enjoyed your story :)

James is fab. I'm eagerly awaiting a print copy of The Dance. I can't tell you how eager I am. I need to be saved from another print book I'm reading--which, incidentally, needs throwing at the wall.

Thanks, Ciara. Honestly, I didn't even think of connection until Marta pointed it out. :D It does appear to be a common consensus though. :D

Aw, you're too kind, M.E. We've discussed said book in need of tossing and I hope The Dance really does save you and not give you more ammo for tossing. :D

Delightful, James! Beautifully crafted. I love stories (like this) where I want to go back and reread with the "new" knowledge imparted at the end. And I agree with Marta on those movies - brilliant concepts!

Thanks for posting today on MB4, James! :o)

Thanks, Aaron. I went back and rewatched The Sixth Sense and The Others with the "new" knowledge as well. In both cases, I had several "Aha!" moments. :D

It's my pleasure to be here. :D

James thanks so much for being our guest. It's been a pleasure. Hope to see you back often!

It was my pleasure, Marta. And yes...I've added this blog to my regular rounds. :D It's a wonderful group you have here.