© Amanda Dickson 2011 all rights reserved
I am a reformed lawyer.
I suppose it was the bookworm in me, along with the fact that my father was a lawyer and I wanted to be like him that led me to the law in the first place. Once there, I was assaulted with the combative nature of actual practice. I wanted to hide in the library, the safety of the books with their 8 point type and endless references to other cases in which some relevant tidbit might be found.  But in the firm, there was no hiding, except before 7:00 AM and after 8:00 PM and occasionally on Sundays when the senior partners were not to be found. 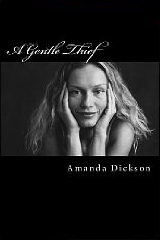 It has been more than ten years since I paid dues to the Bar Association, although people continue to mention my former status as a lawyer when they introduce me at speaking engagements.  I am not embarrassed by it, not much anyway. I am grateful.  It gave me my first novel - A GENTLE THIEF.
A GENTLE THIEF is based on my first real case as a young associate, a case so shocking to the senses that I knew even before I understood the facts that it should be a novel someday.  I could barely keep myself from writing the book at the time.  I can recall my senior partner, the man upon whom the character Rick Day is based, saying to me gruffly as we entered an elevator, “If you write this book, Dickson, you better make us have an affair,” and then laughing.
That was his way.
I left out the affair.
I suppose I have dreamed of writing novels, as so many writers do, from the time I was a child.  I grew up in a large home in a small town in Pennsylvania where there was very little to do except run around outside (which I quickly tired of) and read (which I never tired of).  I read classics before I was able to understand them, Nancy Drew, Watership Down, Dickens. Reading outside under trees was the family pastime.
I now have a large family of my own, five children ages 4 to 23.  My home in West Jordan, Utah, is a noisy one.  There is a lot of yelling (most from the two younger boys) and asking for things, a lot of needs, music playing, televisions and ipads always on in several rooms at the same time.  Not an environment conducive to writing.  And yet, I am writing these words now with a fireplace on my right and my husband on my left in complete quiet.
It must be a pre-Christmas miracle.
That, or this opportunity to talk about the book here in your blog has somehow created the physical opportunity to talk about the book.  I have always found the time to write - somehow.  I have written four other books, three of which have been published, all non-fiction.  They grew out of the speeches I give.  Without intending to do so, I have become something of a motivational speaker.  The first book is really just a long speech entitled WAKE UP TO A HAPPIER LIFE.  The second book also came from speeches I began giving on the topic of change, a topic companies started asking me to address several years ago.  I would be hired as a speaker toward the beginning of the recession by corporations that would ask me to help their employees handle change. That prompted my giving a great deal of thought to how I felt about change and how I might bring a little playfulness and embracing to a topic we naturally push away.  And that led to CHANGE IT UP.  The most recent non-fiction title is a book about the unique and powerful healing that comes from female friendship entitled FRIENDS FOR LIFE which will be published in February of 2012.  (The fourth book has not been published yet, although I actually wrote it first.  I wrote it while pregnant at age 43, an inherently unstable and comical state.  Its title is CAN I SMELL THE BABY?)
All of these non-fiction books were written to support my family.  I saw the writing of them as work, joyful work at times, but work.  But not the novel.  The novel - its writing, its plotting, the dreaming of it and putting it on paper, all of it - was pure heaven.  My only regret is that I let it stew in me for as long as I did.
I am currently working on two more novel ideas, one with my husband and one alone.  (My husband is also a gifted writer.)  I don’t have his permission to share his idea here, but the one I am working on alone is a simple enough plot that I hope will hold the reader’s attention in the telling.  It is set in the small town of Evanston, Wyoming, home to the State Hospital, hundreds of oil workers coming and going, artisans of various kinds who always stay longer than they plan, and cowboys, of course.  It is Wyoming.  The plot involves the owner of a small book store, a middle aged woman, who feels oddly drawn to a man 15 years her junior who she hires to work at the store, even though she doesn’t really need help.  Their friendship and love of books leads to an affair that goes as bad as any affair can go, and then worse.  What happens to her and to the town depends on your PERSPECTIVE, which is the working title of the book.
Thank you so very much for the opportunity to be a guest here.  What an honor and a pleasure it is for me, a lover of mysteries and books of all genres, to visit this site created by writers for writers.  I thank you.
About the author:
Amanda Dickson is a radio announcer, author, newspaper columnist, and speaker based in Salt Lake City. Amanda earned her B.A. in English and her Juris Doctorate at the University of Utah. She practiced law for a brief time before returning to her first love of radio. Amanda taught Mass Communication Law at the University of Utah, becoming a favorite professor among the students. Amanda published her first book in the fall of 2007, Wake Up to a Happier Life. Her second book, Change It Up, came out in October of 2009. Her new book, Friends for Life, is due out in January of 2012. Amanda is married and the step-mother of three children. She is also the indulgent mother of two children. For more info, go to www.amandadickson.com.

Hi, Amanda! It's lovely to have you here today, welcome to MB4! Loved hearing about your journey from the legal world to the literary world. ;o) I, too, read books outside under trees as a youth, and often on my horse's comfy back while he munched grass. Best of luck with your novel, I will check it out!