What's a Good Title for a Book? Ask My Mother-in-Law 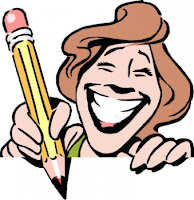 I’ll never forget the night I took my wife-to-be out to dinner and subtly asked about her parents.  When you get serious about someone, you naturally want to find out who your future in-laws are going to be.

“So what does your mom do?” I casually asked.

“She writes a gossip column for a...well, some people might call it a 'yellow' newspaper.”

I searched the restaurant for the nearest exit—we hadn’t actually ordered any food yet.

Yeah.  So is a Bengal tiger, when its belly is packed full of fresh meat.

My fiancée dug around in her purse and pulled out a photograph.  "Just look at that face..."

The woman was grinning at me, a pencil behind her ear, one eyebrow raised.

This didn’t help.  Talk about “walking the line!”  One wrong move and she could destroy me with a single stroke of that pencil.

Well, love overcomes fear, and I got married anyway.

It turns out that, as a novelist, having a gossip columnist for a mother-in-law is one of the best things that ever happened to me.  And not for the reasons you may think—Luba has never written one word about any of my books (not that it would do any good—she lives and works in Latvia, which is not exact the center of my geographic market!)

What Luba is a genius at is titling books.  Having worked for so many years as a “yellow journalist”, she knows exactly what hits readers’ hot buttons.

When I finished my international thriller about currency counterfeiting, I titled it In God We Trust.

It hardly sold a single copy.  One day Luba overheard me complaining about it.

“Is it a religious book?” she asked.

“No, it’s an international thriller.”

Exasperated, I said, “It’s not a religious book, Luba.”

“There’s your title,” she said, pointing at me.

I was skeptical, but I decided to try it.  As soon as I changed the name of the book, people started buying it.

Not long after that, I was finishing up another novel, a paranormal thriller.

Hesitating, I said, “A Gift from the Stars.”

She lolled her head to one side, closed her eyes, and made a snoring sound.

“A mysterious disappearance, then.”

She pointed at me.  “The Mysterious Disappearance of Kurt Kramer.”

I changed the title.

Now, I no longer resist Luba’s suggestions.  I recently published a novel that I was calling Cosmic Casanova, and it wasn’t selling at all.

Even though I don’t resist her suggestions, she still makes me mad.  “It’s not science fiction, Luba.  It’s a romance novel.”

She raised an eyebrow.  “Oh, really?”

“Yes, really.  It’s about this guy who’s dating several women at the same time, and he wants to keep them secret from each other—”

“So it’s about secrets.”

She pointed at me.  “Secrets of the Elusive Lover.”

Mike Wells is American bestselling author of 'unputdownable' thrillers and also teaches in the Creative Writing program at Oxford. See his blog at: www.thegreenwater.com.

Mike, thanks so much for guest hosting today. I love this article so much, it almost got me in trouble at work when I read it and couldn't stop chuckling. I think your mother-in-law should go into a side business for all of us authors who need great titles!

Thanks, Paul and Sheila. She is a great "asset" to have. About consulting with other authors, all she has to say is, "Well, my OTHER daughter is still single..."