Writing your Synopses: How to begin? 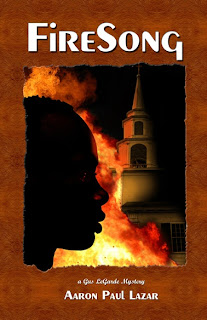 Earlier this week I promised to write a piece about the creation of the dreaded synopsis. We've talked about this before over the years, but because I am fresh off a new experience with FireSong, I thought I'd share the process with you.

a
What I didn't expect was to have NEW release news to tell you today! My publisher, Lida Quillen from Twilight Times Books, is a phenomenal woman and I adore her. (Now, don't get jealous, honey, it's just business!)
a
On the tail of our recent whirlwind experience with Tremolo (Kindle bestseller for several weeks in March), she pushed hard to get the FireSong eBook out early. It's even on sale for 50% off, only $3.25! The print version book comes out in July, but we already have a gorgeous cover and the eBook is now for sale. Neat, huh?

One more aside, Lida also put Mazurka, the fourth LeGarde book up for free for a limited time only. If you're up for a wild rollercoaster ride through Europe with Gus LeGarde, get it now. (Note: the books don't have to be read in order. )
a
So, where do you start? You need to turn an 80,000 word book into a 50 word synopsis or book blurb for your back cover. How's that possible?


First of all, after the book is done, I create an outline.


Heh. Yeah. I know. I'm backwards. I never write to an outline, it just flies out of my head. But really, this outline is more like a record of who did what to whom. I need it to keep straight, and it's very helpful in developing a full-fledged synopsis later.


I start out by simply jotting down all the themes in the story. This doesn't have to be fancy or even written well. It's just a start. For example, the themes in FireSong involve the following:
Okay, I admit it. This book has a helluva lot going on. I probably could have written two books with all this. There are more sub-themes, too, like Colin's wife's severe depression. And the escape of prisoners from the local prison. Never mind Gus's daughter Freddie, who struggles to keep her household in order with a toddler and two twin babies.


I created a 1000 word version for my publisher when I submitted the query, which intentionally included plot spoilers. That's what you're supposed to do when you submit a query synopsis. No plot spoiling on my watch!

Following is what I chose to highlight in the 250 word version. This was not intended to give all the secrets up, like a synopsis would do that you would send to a publisher or Hollywood filmmaker. This is intended for readers only. You'll see I add a lot of questions to spark interest, and try to write it as if it were an advertisement. It's intended to intrigue, as opposed to the submission query, which is intended to intrigue.

What would you do if your country church was hit by a rogue tornado during services? What if the shrieking winds unearthed the bones of a missing parishioner in a nearby wheat field? Now add the discovery of heroin in your elderly minister’s bloodstream. When Gus LeGarde is thrown into the middle of the mess, he knows life’s finally gone berserk in East Goodland, New York.
The Genesee Valley is in chaos. Strangers drive panel vans through the countryside at weird hours of the night. A new batch of drugs is on the street, endangering local. The local salt mine collapses due to illegal mining practices. Gas fires burn in wells. Watering holes turn to brine. Crops are dying. Tempers are short. To top it off, the new salt mine lies directly over ancient Indian burial grounds, bringing anguish to local tribes.
While Gus faces ordeals delivered by nature and man, his wife Camille discovers a hidden room in their house. She digs through historical archives to learn that the 1811 original homeowner, Mary Hill, may have had connections with the Underground Railroad. When local grave robbers begin to loot historic coffins, they find an empty coffin. Who killed Mary? How did she die? Where is her body? And where will this two-hundred-year-old mystery lead?
Join Gus as he’s lured into a bizarre network of underground tunnels to expose the most shocking discovery ever to rock the Genesee Valley.

I'd love to be able to fit that much in the Amazon blurb or back cover, but it's never possible. So it's necessary to shrink it down. My publisher has needs for various length synopses. Some go to distributors. (175 word) Some will go on her website(50-100). Some go to Hollywood. (one sentence loglines). And some will be used for advertising online. (10-20 words) Oh, and there's always the twitter super short blurb, too.


As you would expect, the back cover blurb which must be tight and evocative. That's your ONE chance to get folks to open the book and maybe buy it.


I had to decide right off the bat WHICH of the themes to promote in the shorter blurbs. Right or wrong, I took out the references to Mary Hill and the underground railroad for the 175 word blurb. I'll use the term "underground railroad" and "slavery" etc. in the book tags that are included in articles and on Amazon, etc. But I can't fit it all in there, much as I'd like to!


For the 175 word version, I just took out that whole paragraph about Mary.


Now comes the harder part. The back cover blurb. Typically, I like to do a 150 word synopsis for that, but in this age of trying to keep down costs, the size of our print book has gone down to manage costs. So instead of 6x9, we have a slightly smaller version, with less real estate to fit things in. Here's what I think might look good on the back cover, but Lida thinks it might be too long.

What would you do if a rogue tornado hit your church during worship, unearthing the bones of a missing parishioner in a nearby field?


The Genesee Valley is in chaos. The local salt mine collapses. Gas fires burn in wells. Watering holes turn to brine. Crops are dying. Tempers are short. And the new mine lies directly over ancient Indian burial grounds.

Last of all, for the Hollywood crowd and other online sites, we need a log line. This was my attempt at that.
When a tornado touches down in Gus LeGarde’s hometown it unearths the body of a missing churchgoer, leading Gus into a bizarre underground labyrinth where he discovers the shock of his life and potential links to the Underground Railroad.

And here's a possible tweet that will lead to the new eBook sales link:

FIRESONG - new release. Bones. Tornadoes. Fires. Collapsing Mines. Flooding tunnels. How much worse can it get?

Okay, so what do you think? Does it intrigue you? Would you open it up to read a bit of the first chapter? You can do that here if you'd like.

I hope these examples help you the next time you're faced with creating any length synopsis. And by the way, if you were intrigued, I'm seeking good reviewers to take a look at this book. Want to host my virtual book tour in July? Want to read the eBook and do reviews? You never know, your blurb and name might end up on my back cover. ;o)
a
As I always say, take pleasure in the little things. And if you love to write, write like the wind!
Aaron Paul Lazar
***
Aaron Paul Lazar writes to soothe his soul. The author of LeGarde Mysteries, Moore Mysteries, and Tall Pines Mysteries enjoys the Genesee Valley countryside in upstate New York, where his characters embrace life, play with their dogs and grandkids, grow sumptuous gardens, and chase bad guys. Visit his websites at www.legardemysteries.com and www.mooremysteries.com and watch for his upcoming releases, FIRESONG, TERROR COMES KNOCKING, and FOR THE BIRDS, coming in 2011.

Thank you for this, I'm printing it up so I can really analyse it. :)
Wagging Tales - Blog for Writers

Hi, Charmaine! I'm glad you came back to check it out. Hope it helps in some small way. I know this was one of the hardest things I ever had to learn. Good luck! Coming over to your blog to say hi.