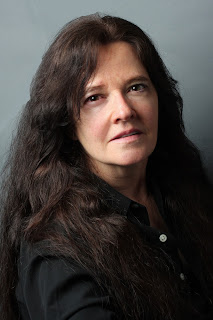 © Deborah J Ledford 2011 all rights reserved
The leading man of my thriller series is Steven Hawk, the only African American deputy of Swain County, North Carolina. Yes, this may be a stretch—there most likely will never be a black man assigned to this position in the heart of the Great Smoky Mountains of North Carolina . . . but I have hope. 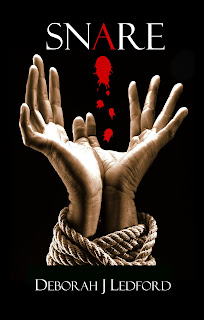 Although Hawk’s ethnicity isn’t a major point of the novels, it is clear that he is a southern black man, especially when it comes to his relationship with family. I spent my summers growing up in the area of the series’ main location. My mother’s people still live in western North Carolina and I visit whenever I can. People of the south rely on family, need them, treasure them.

The same goes for the ethnicity of my female lead, rock star sensation Katina Salvo, who is faced to return to the Taos Pueblo in order to escape from someone intent on killing her. She soon learns that reconnecting with her people is far more important than wealth or fame.

I’m a firm believer that the writer must stay true to their characters, no matter their skin color, background, or beliefs. The “vision” of Steven Hawk came to me initially when I was writing the screenplay many years ago. Although SNARE is much different from the script, I loved the character so much that I didn’t feel the need to alter his appearance when writing the novel.

And I knew that Katina Salvo needed to be Native American. As part Eastern Band Cherokee, it is always my intent to showcase authentic Native American elements in all of my work, so it was crucial to find the correct tribe to gift Katina with. I had no desire for her to come from an Arizona tribe, and the Navahos are already quite well represented by Tony Hillerman. After endless hours of research I decided on the Taos Pueblo Tribe of northern New Mexico.

Assuring the integrity of all things Pueblo, I enlisted help from the spokesman for Taos Pueblo creative affairs, Floyd “Mountain Walking Cane” Gomez. Due to his tireless efforts, and loads of patience, the inspirational Taos Pueblo and its People are presented to the best of my ability. There were many elements I wanted to include in SNARE but couldn’t. There isn’t a lot published about the Taos Pueblos and many topics and stories Floyd discussed with me were deemed confidential. Although I would have loved sharing this with you their wishes will be respected—these secrets will go to the grave with me.

The manuscript was wholly approved by Floyd, and if he questioned any of the pages he sought advice from elders and the Tribal Council. This not only included what I presented about the Pueblo Reservation, but also every element of Katina’s “being” had to be true to the Pueblo culture and personality. SNARE would be lacking on every level if not for this kind assistance.

I had the honor of appearing on the “Living Diversity” panel at Left Coast Crime 2011 in Santa Fe last month with Darryl Wimberley, Neil Plakcy and Gar Anthony Haywood. These truly gifted novelists all write multi-cultural characters. The audience was quite interested in how we go about stepping into the skin of a character so much different than our own.

Consensus with the panel was that every writer creates multi-cultural characters, whether they carry the novel, are secondary, or appear only briefly. If Anglo writers were pigeonholed into presenting only white characters, blacks writing only about blacks, Asians “allowed” to only present their people, there wouldn’t be many books worth reading. Essentially, we’re all the same on the inside.

Deborah J Ledford’s latest novel SNARE is The Hillerman Sky Award Finalist. STACCATO, is book one of her Steven Hawk/Inola Walela series. Both novels are published by Second Wind Publishing. She is a three-time nominee for the Pushcart Prize and her award-winning short stories appear in numerous print publications, as well as mystery and literary anthologies. Deborah invites you to visit her website: http://www.deborahjledford.com/.
Posted by Marta Stephens at Monday, April 25, 2011

I do enjoy books with multi cultural characters!

Deborah, wonderful piece. I'm with you in this regard. I also try to weave in characters who may have been ostracized in the past by society, to quietly teach acceptance and open-mindedness. Going to check out this book now - it sounds fascinating!

Just downloaded both Kindle books in your series. Can't wait to start them. Thanks for being a guest on MB4 today, Deborah.

Great to see you again, Aaron. And thanks so much for your support of SNARE and STACCATO. I hope you enjoy the read!

You make a strong point for diversity in characters. That will most probably transfer into more diverse or perhaps more complex themes. This can only be good. Thanks, peace and continued good things for you in writing and in life.

Thank you for your comment, D.M. And yes, many more levels are introduced with multi-cultural characters which adds interesting layers. I love to implement symbolism in my writing and the Native American culture opens up endless possiblities for doing so.

I was fortunate enough to hear Deb at LCC, and I've read Snare. Thank you, Deb. You do an excellent job introducing readers to a culture we're not familiar with. And, congratulations again on your nomination for the Tony Hillerman award. Your book truly represents the southwest.

Thank you for your comment, Lesa. You're such a dear to all of the writers you feature on your Lesa's Book Critiques Blog. I'm thrilled beyond words to have your support. Big smile!

Hi, Deborah! Interesting article, but I expected no less. Both your books are fascinating, but Snare has the added beauty of being multi-cultural. Added an extra dimension to well-defined characters. Best of luck with your books!

Hope to hear from you soon

Thanks so much, Pat. I'm so pleased you enjoyed SNARE and STACCATO. I am axiously awaiting your latest release Light Bringer!

Best of luck with your projects, Melinda.

Your intentions and your research paid off: The novel is wonderful first because the characters are wonderful. They are three-dimensional and true.