MB4 welcomes back Sonya Bateman (aka S.W. Vaughn) for her first guest post since the changing of the guard. For those of you who don't know her, Sonya was an original member of our MB4 team and writes screamingly good fiction. 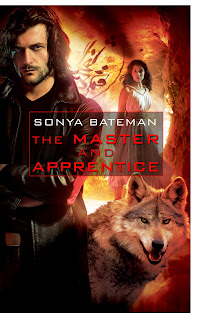 Note: This article first appeared on the Romantic Times Book Reviews website.
This is a love story. More or less.
Master and Apprentice was the first novel I’d ever written under contract. The first book in the series, Master of None, had sold to Pocket Books as a two-book deal, with a synopsis and fifty pages of the second book—which was at the time titled Djinn’s Apprentice—already written. At that point, having already completed eleven novels (yes, it took me that long to break into publishing), I was fairly confident that I could meet the dreaded deadline with the second book.
It wasn’t long before I was forced to reevaluate my opinion. Confidence is a fickle thing, and around page 200 of the sequel... it left me.
I was sure Confidence had laid eyes on some other, more established writer—perhaps Jayne Ann Krentz, whose books I’d recently glommed. Or maybe it had gotten bored with urban fantasy and jumped ship to Stephen King territory. I knew I shouldn’t have read Duma Key that sixteenth time. At any rate, one night Confidence packed its bags and moved out, without leaving so much as a Dear Sucker letter, and I awoke the next day completely stuck.
Without Confidence, my characters turned on me. My unlucky thief, Donatti, decided it’d be a great idea to cease and desist all this save-the-world stuff and find some tropical island to hide out on until the djinn finished achieving world domination. Ian, the main sort-of-good djinn, wanted to take his princess and go home—if only I hadn’t let his princess get kidnapped. For weeks, they sat around glaring at me. Taunting me. Telling me that I shouldn’t have taken the contract, because I was never going to finish this book, and my publisher was going to send some goons around to lump me up or cart me off to writer jail.
Finally, I realized that the problem wasn’t where I was stuck. It was how I’d gotten there. I needed to go back and frontload a catalyst in the earlier part of the book that would make things happen later.
Thus began my fortunately brief tryst with Panic.
Panic settled in comfortably, having been with me before. It reminded me that I’d done this type of major change with other books, and it always resulted in the deletion of several chapters. Once, I’d had to scrap an entire 80,000-word novel because I’d written it around the wrong main character. At that point, I hadn’t been on a deadline—but I was now. And Panic gleefully poked me with this fact over and over, while I stared at the place I knew the change had to come: page 16. I was facing the prospect of deleting 175 pages of work, and somehow writing 300-plus brand new pages in about ten weeks.
Then an unexpected idea presented itself. Instead of changing the plot and deleting large chunks of story to accommodate the catalyst, which I’d planned to work into the arc of an existing character, I’d create a new character. Someone quirky and interesting and fun, with lots of guts. Since my characters were, on page 16, traipsing around a largely uninhabited mountain, I thought, “A crazy hermit mountain man! Yes!”
And the hermit said, “Actually, I’m a woman.”
I named her Mercy, and she fit right into the story like I’d intentionally left gaps just for her. She brought her pet raccoons along, and even finagled herself a romantic sub-plot with an existing character. I didn’t have to delete anything major, and my sketchy planned ending suddenly solidified itself with Mercy’s addition.
Panic hung around for a while, muttering halfheartedly about deadlines and deleted scenes and writer jail. Once I ignored it long enough, Confidence poked its head back in and asked if it could stay awhile.
I let it, even though I knew it was still seeing Jayne Ann Krentz and Stephen King on the side. To this day, Confidence and I have a spotty relationship—but it usually comes around just when I need it the most. I did manage to meet my deadline for Master and Apprentice, and that’s what matters.
But I’m sure Panic isn’t done with me yet. In fact, it’s looking forward to my next book more than I am.
-----------------------------------------------
MASTER AND APPRENTICE is now available at Amazon, BN.com and (almost) everywhere books are sold (except Walmart).
Haven’t read the first book yet? You can read MASTER OF NONE online for free this month (April) when you join the Pocket After Dark online romance and urban fantasy community (also free).
In other news, my alter ego – former Murder By 4 member S. W. Vaughn – has a present for you: a free book! Starting this Tuesday, April 5, BROKEN ANGEL will be free for your Kindle through Smashwords and Barnes & Noble in eBook format. This is the first in a thriller series about underground street fighting, and the next three books in the series will be on sale for $2.99 for a limited time.
Here’s what it’s all about: 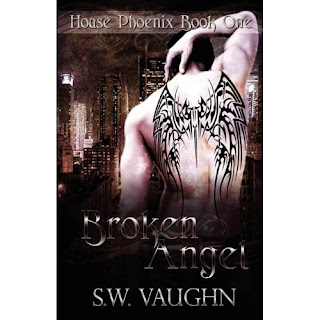 
When Gabriel Morgan’s sister disappears somewhere in New York’s underground, he’ll do anything to save her. But finding her is only the beginning, because Marcus Slade won’t let her go for less than ten million dollars – earned through Gabriel’s blood.

Slade, one of five ruthless leaders of an organization identified only by a symbol, runs hookers and street fighters, and never gives up what's his. Including Gabriel’s sister. To win her freedom, Gabriel is forced to undergo a brutal training program with Slade’s top fighters in order to become one of them. He is branded, broken, given a new image, and a new name.

Sonya, it's a thrill to have you back! We miss you a lot, (not that we don't love you, too, Ron!) I'm excited to get my copy of Master and Apprentice. I love the relationship between Ian and Donatti - priceless. Thanks for joining us today, and best of luck with your new book! I hope everyone takes advantage of the free offer to read Master of None, as well as the super deal coming up Tuesday for Broken Angel. That was the first book of yours I ever read, and I still love it. ;o)

Sonya, great article and welcome back!

"... I realized that the problem wasn’t where I was stuck. It was how I’d gotten there. I needed to go back and frontload a catalyst in the earlier part of the book that would make things happen later."

Far out!! It means that Uncertainty who has visited the Smith house and her cousin, Defeat, are truly just passing through. Send Confidence over with a bucket of chicken will ya? Xoxo

Thank you, Aaron! I guess I'll always have a soft spot in my heart for Broken Angel, since it was my first "real" book (we Do Not Speak of the two I wrote before that, LOL). Thanks for putting me up today!

LOL Kim, I'm sending Confidence to you. Right now I don't need it... I have Deadline occupying me. Fun.