I Do Believe in Spooks... 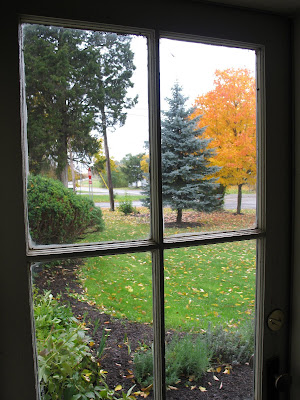 Living in an antique home has its problems, especially when you’re not a handyman. My father taught me all sorts of wonderful things when he was alive, including passion for the arts, gardening, nature, gourmet cooking, and a good mystery. But he didn’t know much about mechanical, plumbing, electrical, or woodworking skills. Though I’ve tried to learn over the years with self-help books and advice from friends, I remain singularly unhandy, perpetually bowing with an unholy need to the whims of the local plumber and electrician.

Take, for example, the twenty-six windows that are crumbling as we speak. The six by nine inch panes are coming loose from their wooden mullions with alarming frequency. Or the floorboards in our bedroom, a lovely old yellow pine, that poke up like teepees when it’s hot and muggy. Yeah, they need to be treated with poly something-or-other, but for now, the moisture makes them swell. Consider the two wells that sometimes work in concert – except for the hundred times a year I have to run down to the cobwebbed cellar and reset the breakers or tap on the pump to make it work.

The disadvantages are many.

But, there are also benefits, such as the three working fireplaces. Or the soil that surrounds the property, rich and black, untouched by bulldozers. It’s not like the hard packed fill they put in new housing tracts. I don’t need to “amend” this soil. I just need to keep up with the produce and flowers.

Our house was built in 1811 by Dr. David Hunt. I admit, compared to many homes in Europe it’s just an infant. But in terms of our country and its young age, 1811 isn’t exactly contemporary. Think about it. This house was built and lived in over fifty years before the civil war!

Imagine the births, deaths, dramas, romances, and heartaches that occurred within these rooms. Did the inhabitants suffer from small pox? Starvation? Were they affluent? How many horses or cows did they own? And… how many ghosts linger in these plaster and lathe walls?

Let’s examine the past 100 years. We live on Hunts Corners, named for the original owner of our home. My daughter Allison and I have found his grave and that of his descendants in an ancient cemetery on a nearby hill. 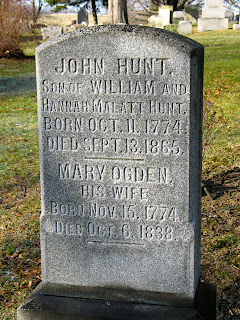 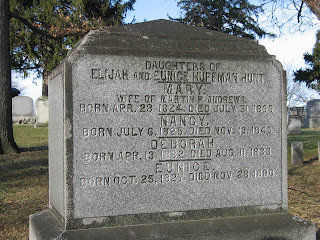 According to an elderly neighbor, over seven people have died on Hunts Corners. Traffic accidents. Drivers not stopping for the all-way stop signs, or sliding on ice, or drunk drivers plowing right into the telephone pole. Sad to think about. Makes you wonder about their spirits. Did they ascend to Heaven? Or do a few guilty souls remain in the area, confused and wandering, seeking the path to redemption?

Recently, I began to ponder another death disclosed to me by a neighbor. We began to correspond after he read a few of my books. He’s a bright and entertaining young fellow who happens to be a voracious reader. We clicked. And we chat back and forth about books and life and sometimes… about the history of our area.

It seems Hunts Corners has a mystery all its own, stemming from the early 1900s. As the story goes, my young neighbor’s great grandmother noticed something odd one day. (I’ll invent names to protect the innocent… or guilty as the case may be.) While going about her daily chores, Mabel McAvey realized she hadn’t seen the young girl who lived next door in a long time. Anna no longer attended school, and rarely made an appearance outside the home. When she finally caught a glimpse of the girl, Mabel noticed a thickening in her middle, well-wrapped by heavy garments. She suspected the girl was with child. In that era, a pregnancy out of wedlock was unthinkable. Shameful. A sin. The family would endure public humiliation if news got out. So Anna was sequestered for nine long months as Mabel spied on her and watched the child grow in her belly.

Speculation grew. Was the child stillborn? Or worse, was she murdered by a family cloaked in shame? Rumors were that the little baby was buried behind Anna’s house.

Since then, there have been reports of children pointing behind the house, exclaiming about the “little girl in the weeds.” My neighbor’s six-year-old daughter “saw” her, with no prompting.

“Daddy? Who’s that little girl in the weeds? Can I play with her?”

My friend saw no one, and this happened many times. His daughter clearly saw someone out there.

So, although no adults have seen her, I think I might have, last winter.

I rose early to photograph our Christmas lights. They were unusually festive last year, better than all past years. We’d added a few light-up deer to graze in splendor on the snowy lawn, and I was bound and determined to capture the scene during the blackest of night.

It was a clear, chill morning. Five A.M. Not a breeze stirred. Most households were fast asleep. Few cars passed by.

I brought my trusty Canon Powershot outdoors and took dozens of photos. Later, when I viewed them on my PC, I saw the ghost. There she was – looking straight at me with wide open eyes. Filmy, transparent, but with a clear face and body. Only two shots revealed her, although I took dozens that morning.

These photos are untouched, straight from the camera card. And yes, I know there’s probably a scientific explanation. Maybe the light from the flash illuminated ice crystals in the air, causing a momentary illusion. Maybe it reflected off my frozen breath that puffed into the night. Maybe… who knows? She sure looked real. Can you see her? In the first photo, she has a long neck like ET and looks rather surprised. In the second, her Casper-like face is hovering over the car. See it? 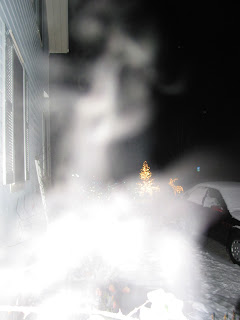 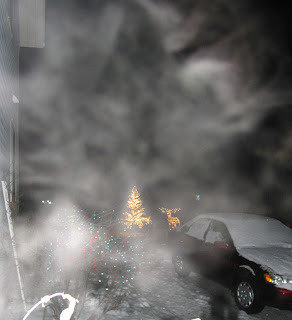 Last night I woke to a tapping sound. Usually it’s Balto in his bed, scratching an itch and thumping up against the wall. I rose to check, but he lay still, mouth open, breathing evenly.

Could it be my grandson knocking on the door? I looked. No little boy stood silhouetted in the dark. All was quiet.

I tumbled back to bed, ready to snuggle in and resume the great dream I’d been having that took me away to exotic colorful locales and luscious meals.

I rose up and stared outside. Headlights flashed by, briefly pouring cones of light into the darkness. Was that a flash of white? A face? Or simply a reflection on the rain-soaked street?

The tapping returned. Rhythmic. Evenly spaced. Over and over again.

Something was outside my window. On the second floor. Twenty feet above the ground.

Could it be the little girl, needing to connect with me and spill her story?

Icy fingers tap-danced down my spine. I burrowed beneath the covers and closed my eyes tight. 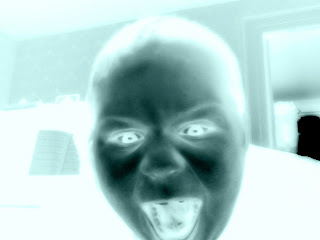 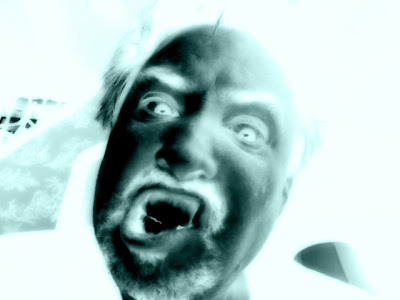 Mazurka, the fourth book in the LeGarde Mystery series is now available through the author, in special pre-release copies. Email him at aaron.lazar@yahoo.com for details.

Now available - the hardcover collector's set of Double Forte' and Upstaged! Only ten sets available. A value of $64.00 available now for $49.95 plus shipping.
Posted by Aaron Paul Lazar at Saturday, October 31, 2009

I'm spooked! Check out my Halloween list at Halloween Reads.

What a great little story, Aaron. Oh man, I've seen my share of ghost. Our house is 100 years old but I think the things I've seen don't have anything to do with the house. The interesting thing is, you can't "will" things or being to appear. They arrive at the most unexpected times and it's only afterwards that you realize you've been visited. ;)

Awesome story! And those photos are just great ... and very creepy. :-) I love a good ghost story!

Hope you have a happy Halloween. :-)

I should have waited for daylight to read this. Now I've got all the lights in the house on.

LOL! Thanks, everyone. Happy Halloween!