Introducing Ericka Scott - And A Contest!

Murder by 4 welcomes multi-published author Ericka Scott, who is celebrating her publishing anniversary with gifts for you! Read on for a chance to win a gift certificate to Barnes & Noble or Amazon. 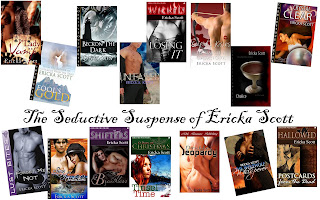 Hello, I'm Ericka Scott and I write Seductive Suspense. I love words so much that I taught myself to read at three years old, and like most of my fellow authors, I’ve written stories for as long as I can remember. I always wanted to be a published author, but as time went on, life got in the way. Working full-time, for me, was a huge sap to my creativity. I was often simply too tired to come home and write anything. Then, back in 1993, ‘baby’ came along and I was able to stay home for a few months with her. I was able to read more and finally worked up the courage to enter a few writing contests. I didn’t win anything, but I had fun.

Then life intervened again. I got divorced and had to go back to work to support myself and my little one. Luckily, this time, the job brought writing opportunities as a technical editor and writer for a government contractor. Granted, the “stories” were about airplanes and their associated systems, but I got to use my creativity to turn engineering nerd-speak into words the general public could understand.

About this time, life took an unexpected turn when I remarried. My writing also took off about that time (coincidence? Probably not) and I started writing short mystery fiction for publication. My short stories appeared in a few print publications and, more often, in e-zines. However, I still considered writing a hobby. It was something I did in my spare time.

In 2005, two more children came along. My husband and I faced the decision to give up one paycheck so that I could stay home with ‘the boys’. At first, I was very busy, then, as the babies became toddlers, I found that I had a bit more time on my hands. I was also discontent with writing short stories. I wanted to write bigger (and better) but didn’t have a clue where to start. One day, while looking for a challenge, I stumbled upon the Avon Fanlit contest.

I’d like to say the rest is history, but that wouldn’t quite be true. What I rediscovered was my love of romance, suspense, and reawakened my love of writing. Through several friends I made over the course of 8 weeks of insanity, I discovered e-publishing. After reading a staggering number of my friends’ works, I decided to try writing a novella. Anything over 10,000 words for me was difficult, but that’s exactly what I was looking for – a challenge. Surprisingly, I put together a 15,000-word story titled Crystal Clear and sent it off.

However, Deanna Lee of Cobblestone Press must have seen some spark in my writing. She gave me a few suggestions for rewriting and asked me to resubmit. On May 17th, 2007, Crystal Clear was published.

Around this time, I confessed my most secret desire to my husband. I wanted to pursue writing with the intent to make a career out of it. He’s been incredibly supportive and because of him, I’ve been able to write a staggering number of books in the past two years (seventeen novellas and as of this month, one full-length novel!)

So, this month, I’m celebrating two years as a “published” author. It was quite a ride getting here and I’m glad to say that the journey isn’t over yet.

To celebrate my anniversary, I’m going to give the gift instead of receiving it. Leave a comment on this post and on May 17th, I’ll draw two names to win $10 gift certificates to Barnes and Noble (or Amazon).

Visit Ericka Scott online at www.erickascott.com. Don't forget to leave your comment below for a chance to win!
Posted by s.w. vaughn at Monday, May 04, 2009

Holy cow! You are one prolific writer, Ericka. :-) I'm amazed and inspired by your output.

Wow Erika! how fabulous your story is! I know a couple of writers who need to hear encouraging stories such as yours. I will definitely share it!

Erika, welcome to MB4. It's great to hear the story behind the story especially one like yours that shows what dedication and determination can accomplish! A huge congrats!

Holy Mackeral! (well, SW used "Holy Cow," so I had to dig...) Ericka, SEVENTEEN novellas and a novel? You make me feel like a slacker with only a few novels each year!! I'm so glad your husband is a supportive spouse, I'm sure the reading public will thank him for years to come. ;o)

Thanks for all the great comments! It's been a wild two years, and my family has endured many a dinner of fish sticks and tater tots. And honestly, I'm beginning to name the dust bunnies! It has helped not having a day job (other than running after the kids and trying to maintain some semblance of sanity).

My favorite phrase (and my fellow fanlitters can attest to this) is that the only difference between the published and unpublished is persistence. Learn your craft and the markets, and above all...keep writing and submitting!

How lovely to read of your journey, and the success at the end of it. (I took forever to learn to read, so had to be content with just telling stories to my brothers when I was three.)

Congrats on your two year anniversary. What a wonderful story. Kudos to your drive to write.

Kim Smith and Aaron Paul Lazar were selected as the winners. I'll be contacting them personally to distribute the gift certificates! Thanks everyone for stopping by!

cool beans! i just never win anything so this is very exciting!

Ericka, thank you so much! What a thrill! I know just what I'm putting that money towards - set eight of the Midsomer Murders DVDs. I'm hooked!!! Thank you. ;o)