Book Review: A Spark of Heavenly Fire by Pat Bertram 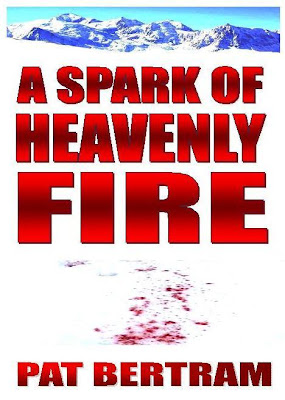 Review by Aaron Paul Lazar
Who says you can’t squeeze romance into a thriller? And while you’re at it, how about weaving in a deeply moving story about human redemption?

Author Pat Bertram says you can. And she’ll convince you before you can say chimera – the lethal combination of virus, bacterium, fungus, and human genes that causes the rapid spread of the “red death,” a bio-engineered weapon threatening the entire state of Colorado.

Kate Cummings is trying to deal with the loss of her husband, who drove his car off a mountain after a long battle with Multiple Sclerosis. She passes by his bedroom without daring to enter, and slogs through life in a solemn daze, feeling guilty for every time she waited a few extra minutes to answer his summons, or for each time she became angry. His loss haunts her, and although her work at the Bowers Medical Clinic is fulfilling, it can’t heal the hole in her heart.

When a jogger stumbles into Kate with red eyes blazing, he vomits blood on her and dies instantly. A rash of similar deaths follows, decimating the state. Orange paint markers on front doors – signifying a “red death” in the marked homes - begin to appear with frightening regularity. Panicked parents discard their red-eyed children, fearful of contagion.

Enter Greg Pullman, reporter for the Denver News, who’s engaged to the ditzy beauty, Pippi O’Brien, local TV weather girl. But when he bumps into Kate after Pippi heads for the border in search of safety, things change. Together, Kate and Greg investigate and unearth the shocking source of the horror that has shut down their state and caused a rogue wing of the military to terrorize Colorado’s remaining citizens. Basic human amenities – so often taken for granted – become grounds for murder. And the streets are no longer safe to walk unescorted.

In addition to a killer story line, smooth writing, and phenomenal characterization, this page turning thriller features fine examples of charity through glimpses into Kate’s huge heart. The remarkable heroine opens her home to survivors who are homeless and hungry. Soon, partnered with a destitute woman named Dee, Kate’s home becomes a refuge for survivors. And in the midst of the massive deaths, terror, and horror, Kate finds salvation.

The tension in A Spark of Heavenly Fire is electric. Taut suspense pulls you along at a rapid pace. This reader was up way past his bedtime three nights in a row. And yes, it was that good.

Great review Aaron. If it kept you up three days running, I know it is for me!
Kim

Great review! This sounds sooo good and I hope to read it sometime soon!