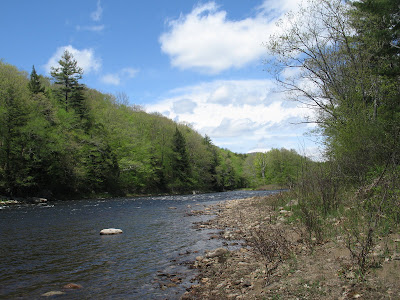 Murder by 4 recently published a post by Karen Hulene Bartell, urging writers to change their location for writing inspiration. I've known for decades that this works for me, because each time I've had a chance to travel - whether it was through a work conference to San Antonio or a family vacation to Cape Cod - I've come away with scads of new ideas for scenes, action, and characters. I can't help but soak up the new details of such locales. Of course, being away from the day to day worries and chores also helps to fuel the creative fire. And that's half the battle, right? 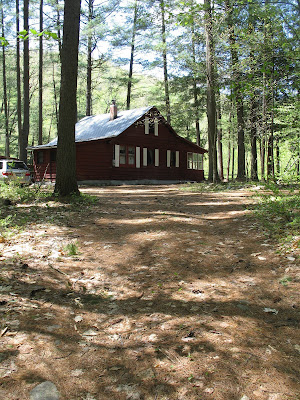 Last week my wife and I stayed at a rustic cabin in the Adirondacks. I say rustic, because it didn't have all the amenities of home. It wasn't like we had to use the old outhouse (there was one), but there was no cable (who cares?), no washer dryer (So? Bring extra clothes!) No cell phone service (ahh..peace and quiet) No Internet (Okay, I admit, I was in withdrawal) No neighbors...
That was the best part. It took a while to get used to the idea that we weren't being observed by casual drivers by or neighbors (I like my neighbors, but I liked this better...) By the end of the first day, we'd grown addicted to the delightful presence of the water rushing beneath us and the quiet calm of the woods.

The river had a personality of it's own. It's sound - more than a murmur, less than a roar - was chathartic. I opened my window at night to let in the cool (sometimes cold!) breeze to hear the river while I devoured books and slept like the proverbial log.
Of course, there was a reason I'd chosen to escape to this spot. I'd been stalling a little on my current WIP, a paranormal mystery set in the Adirondacks. But I hadn't been there in so many years, I was calling on distant memories and Internet photos. It worked fairly well, but I needed more. I needed the feel of the cool woods around me, the scent of balsam, the crunch underfoot of pine needles on soft dirt. I needed to be immersed.
And of course, the ability to up and go on the spur of the moment is actually one of the hidden blessings of being laid off from my job at Kodak. I never would have taken this week in May to go play in the woods for a whole week. But, with a good tax refund in hand, the possibility became a reality. 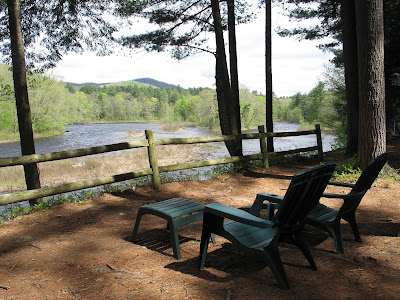 For hours each day, my wife and I sat in Adirondack chairs on the edge of the cliff that overlooked the gorgeous Sacandaga River in Hope, New York. (see above)
We were just about a half hour's drive inside the Adirondack Park, on the south side. The cabin reminded me of my childhood summers at camp in Maine (Tremolo: cry of the loon) and was absolutely perfect. We kept the fire going in the old Triumph woodstove. 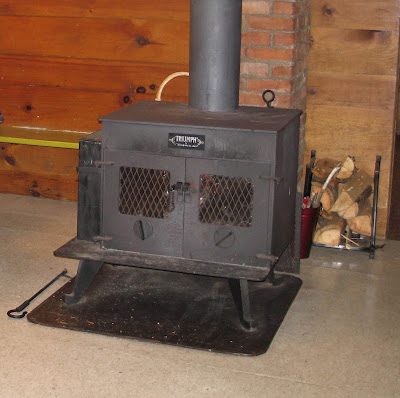 I read three books in six days: More Deaths Than One by Pat Bertram (fantastic plot!), Longshot by Dick Francis (a wonderful reread that reminded me what damned good writing is all about), and Marley and Me by John Grogan (hilarious and a heartbreaking work that also reminded me simple writing is often the best).
And folks, I wrote like the wind. God, did I write. The scenes flowed as easily as the Sacandaga River, set in the very cabin we stayed in. The cabin became the location my protagonist Marcella's mother had been stashed by the kidnappers; the river became the spot she fought with a rogue FBI agent, the island across the way became the secret spot her mother was abandoned, tied to the tallest pine tree in the center of the island.
In six glorious days, I wrote 13,000 words, and also set up the rest of the scenes in the book. Now I know where the lost "treasure" is located. And I know what form that treasure takes. And I've got all the lovely woodsy details to get Marcella, her mother, and Tony to the top of the mountain where they'll face a surprising end to a twisted story.
But the week was well balanced. Between writing for a few hours each day, reading, just spending time with my wife, and cooking, I also was able to do a little work I'd promised (back in January) on a friend's manuscript. Got about fifty pages done on that, which lessened my everpresent guilt. 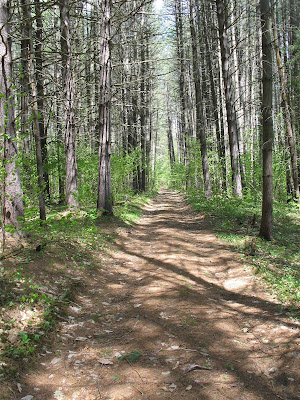 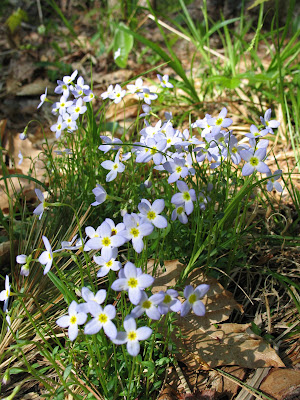 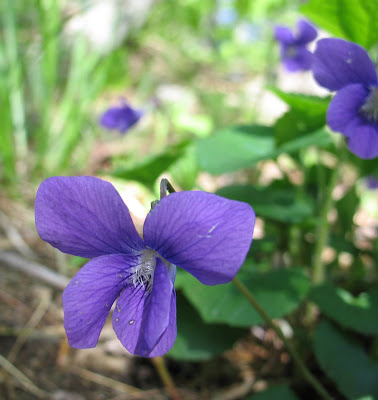 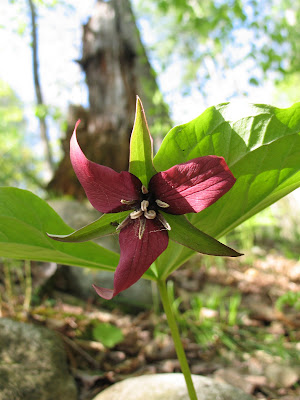 And finally, the day before we left, I accepted my own challenge to climb a local mountain to a remote lake. The experience was humbling, and damned hard. But I wouldn't have given that up for the world. And now I have the location of the final scene in The Aviary. ;o) 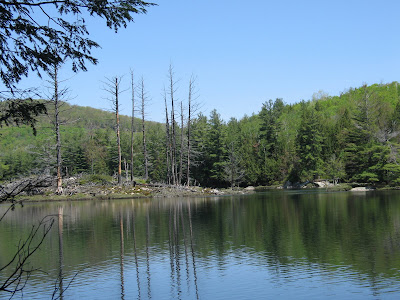 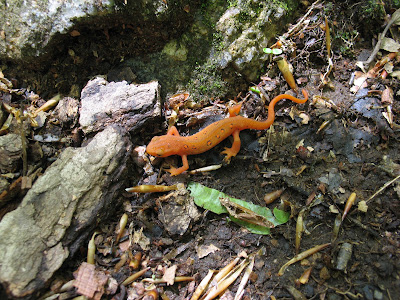 You can be sure this little orange newt (or salamander?) is going to show up in the book. ;o)
a
When I returned, I was thrilled to discover the ARC print version of MAZURKA in the mail. We have a set release date now: August 15th, 2009. Can you get what I'll be doing this week? Final proofing, here I come!
a
Even if you can't get away for a whole week, try a walk around the block or a country drive with your honey. Change your routine a little, and take a saunter down a path you've never checked out. Bring your dog and let him choose the way. Be sure not to get lost!) But whatever you do to change your environment for a little while, when you get back, I'll bet you'll write like the wind!
***
Aaron Paul Lazar writes to soothe his soul. The author of LeGarde Mysteries and Moore Mysteries enjoys the Genesee Valley countryside in upstate New York, where his characters embrace life, play with their dogs and grandkids, grow sumptuous gardens, and chase bad guys. Visit his websites at http://www.legardemysteries.com/ and http://www.mooremysteries.com/ and watch for his upcoming release, MAZURKA, coming August 15, 2009.

Great post, Aaron. Love the pics. Totally agree with your viewpoint. Getting away to get a new perspective on something always jogs my lazy muse into working. thanks for the reminder that the simple things in life are what helps the creative grow into books.

Thanks, Kim. You know, I've been in terrible withdrawal for my camera. I'd lost the battery charger back in December,(which used to be so expensive), but recently found out it was only 18 bucks online and got a new one. Now I'm able to take photos again, and it felt SO good!

Next, I ventured into some grassy trails nearby where I shot wildflowers.Now I have this image lodged in my head of you wandering around in the woods with a shotgun, blasting away at the local flora as though its very existence offends you. LOL

What absolutely gorgeous pictures! Love the salamander! And everything you're saying here is so true. I'm committed (as of Sunday) to walking three miles a day minimum, so I'm walking to elsewhere that isn't my house to give myself a chance to write (since it's just not coming any more).

So glad you had such a great time - and can't wait to read more Aviary!

Thanks, Sheila. It was a perfect trip. ;o)

SW, you crack me up. Me with a gun in my hands - that's the funniest image I've had in ages. Ha! And how incredible that you're walking every day! Yay! Wish we lived closer, we'd be great walking buddies. ;o)