The Shores of Thanksgiving 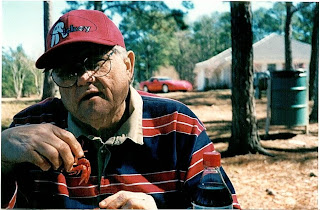 
“I swear it. I never took my eyes off him—I only blinked.”

* * *
It is one of Florida’s best-kept secrets—those miles of virtually unspoiled sand and surf from Mexico Beach to just below Port St. Joe. The color of the sea was a confusion of blue and green—a hue no artist’s palette could counterfeit. The sand was like spilled sugar. Our family of three vacationed at Mexico Beach for several successive summers, nestling ourselves in an average but ample cabin only two hundred yards from the crash of the waves. Nearby was a fishing pier, stretching several hundred feet into the Gulf of Mexico. Its boards were gray and coarse, sandblasted and washed by the wind and tides. In the evenings, we tied our crab nets to its rails, waiting patiently to collect the blue jimmies that would fill our steaming pot. Our supper fare was always the same—succulent crab, steamed corn, and red potatoes. The flavor and freshness was such that we would never change the menu.

In the distance down the beach one could see the faint outline of St.Vincent Island. For years St. Vincent remained in private hands, operated as a sanctuary for exotic fish and game. It was both a conservancy of nature and a toy to please the whim and ego of its owners. Eventually it was transferred to the Department of Interior as a wildlife refuge. Each of our summer visits always included a guided trip to the Island for the “men” of the family—a rare chance for me to introduce my son to nature and to catch and release the large peacock bass, shell crackers, and other game fish.

The third day of vacation began like all the others—an early morning ritual of combing the beach for shells and the prized sand dollars that often washed ashore overnight. The sand dollars on this stretch of beach were as white as snow and unusually symmetrical. We collected them not only as souvenirs, but to use as tree ornaments at Christmastime.

As we moved northwest along the shore, Amy and I led the way with our four-year old son Jon trailing behind. We occasionally had to stop and wait for him as he digressed his path—herding a beach ball to the right and left. He carried a sand pail along, and had filled it with shells before we made half a mile. We stopped and sat for a few moments, culling any imperfect specimens from his collection to make room for more.

The surf swells were unusually large that day, and portions of the beach were littered with underwash. For the next few hundred yards, Amy and I were concentrating especially hard on our task, trying to spot sand dollars amidst the drift of seaweed and coconut husks. It was a treasure of debris, and I longed to find one those oddities that occasionally trek from distant shores yet unexplored. Prized were the colorful crab-pot blown-glass buoy markers. No two were alike. Hey! What was this? A bean pod of some sort—with a kernel inside as big as a buckeye. I paused to examine it.

“Where is Jon?” Amy asked. Such few words, such frantic tone. I whirled around. Jon was nowhere in sight. Two seconds ago he was tugging at my shorts! I cupped my hand over my brow to shade the orange haze of the sunrise. There was nothing but beach break as far as I could see. My face flushed. I felt the blood pour out and my skin began to tingle and sting. Amy was screaming Jon’s name, and running back along the beach. I thought: Where’s the beach ball? It’s bright red. It should be visible for a great distance. But it was gone.

I began to chase after Amy, who was distancing me. We headed southeast, running in that special aisle of wet sand that is always packed firm to the foot. I would periodically stop and look into the gulf—not wanting to see anything there. No red ball, no bright yellow swim trunks. It was an odd reassurance to see nothing but a vast expanse of empty sea.

Emotions were combating hard for my attention. Tears were being overruled by the authority of adrenalin. I had to swallow hard to suppress the lumps that swelled in my throat—those alien knots so intent in closing off my air. I wrung my hands as I ran—
my signal of non-surrender to the despair that engulfed me. Amidst this cascade of emotions, I felt as though my insides were sinking. Only my feet confirmed I was still firm in the sand.

Suddenly Amy shouted to me. She had climbed the row of dunes that separate the beach from the highway and cabins. She was waving frantically. I rushed to her side. There was Jon. He had somehow fled our notice, climbed the dunes, and was busily sorting out his shell collection on the porch of our cabin. We ran to him and sandwiched him between our bodies. I was dripping a sweat that defied the dryness of the gulf breeze.

Our son was safe in our arms again. There would be no scolding, no lecture. None of us moved from that spot for the next hour. Amy and I sat in silence, relishing the cooing and murmuring from Jon as he sat playing and arranging his shells and sea treasures. Meanwhile my mind replayed the morning over and over. I paused the scenes long enough to offer prayers of thanks to God.

The event had been so unbelievably frightful, so breathlessly exhausting. My brow would remain deeply furrowed—plowed so by that rush of despair and loss—that awful emptiness—the sweat of panic and the well of tears—that choking grief.

That night Amy and I slept fitfully, often exchanging hollow stares that transcended the darkness. When morning came we packed the car and headed north for home. It was a bright and glorious day, refreshed with clear skies and calm winds. Every few miles, I would check on Jon in the rearview mirror, swallowing at the lump in my throat. Here we all are. This family of three.
* * *

Author bio: Lad Moore enjoys hundreds of writing credits in print and on the web, and has earned several awards including a nomination to the Texas Institute of Letters. His work has appeared in Virginia Adversaria, Pittsburgh Quarterly, Paumanok Review, Carolina Country, and Amarillo Bay, among others. Mr. Moore is a five-volume contributor to the Adams Media anthologies, and is featured in an edition of "Chicken Soup for the Soul." Two collections of his short stories, "Odie Dodie," and "Tailwind," have been published by BeWrite-Jacobsen Books. The author resides in Jefferson, Texas.
Posted by Marta Stephens at Sunday, November 23, 2008

What a heart pounding story, Lad. I can just imagine your panic. The fear is crippling, I know. And what is so compelling is that the worst happens. My heart breaks for those parents. I'm glad you were spared.

whew. i am breathless. so glad this had a happy ending!
kim

Lad, I could so relate. Although my experiences were probably a little shorter lived than yours, I remember the horror of such moments. Melanie hid beneath a circular rack of clothes in Walmart once. There one second, vanished the next. The fear was crippling. I remember yelling her name, racing around the aisles. Thank God she emerged quickly. And thank God your little boy was safe.
All my best and Happy Thanksgiving!