EVOLUTION IS ALSO A LITERARY TERM 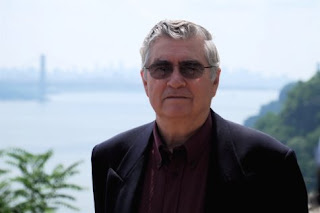 
Take your hero and maybe heroine, torment them for 250 pages, and squeeze them out in different seasons, with different clothes, hairdos, experiences, emotions, and maybe partners--for we all know the story's trials must change our POV characters.

Now, get pen and paper and--quickly--set down six ways to evolve the same characters through four novels. Your answers need to be elements that readers will "get," whether with familiarity or surprise, and with each novel moving the characters further along.

Poirot and Miss Marple sell a lot of books, but usually, killing after killing, they walk away unchanged. Perhaps that's because they're not married. They also seem unscathed. I've promised myself not to write about tough guys who save the world and break hearts. Gary and Becca, my amateur sleuths, are married and not bulletproof. They relate like an updated "Nick & Nora," without the dog, but with an edge. I'm married too, so I know how things evolve.

What do we mean by the "e" word? Everything from the simple to the sublime. Let's start with simple: The Food Police. How long does it take for--again, usually--the wife to impose discipline? In my Reluctant Sleuth Mysteries, it happens in the second book. That's fine with Gary. They met in the first novel, SAY GOODBYE, a year after Gary's late wife died, and whatever Becca cooks beats Chinese take-out. She's also insecure about her figure--though as Gary and I know, it's a self-image problem. She watches her diet, as so many others. We'll raise the issue later--for now, call it Point S for Self-image--and, maybe, Showing.

Then there are mannerisms, personality quirks. Becca is used to zinging men--the sharp, swift, clever line. Gary doesn't care. Her acerbic comments had sent men packing. His ability to see through it was one reason they bonded. So, in a subsequent novel, when a woman friend calls Becca on it, she waits until she and Gary are alone and tells him she won't do it any more. "It's unbecoming," she says. His answer--mind you, he's nibbling at her neck--"You're very becoming." But the path of literary evolution can be tortuous. Her reply: "She got you excited, didn't she?"

Digging a tad deeper, marriage partners arrive with separate personalities. Compromise may be the name of the game, but what is each willing to give up--or, not? This offers another interesting layer. Gary became an amateur sleuth when a friend asked him to look into the death of her husband--she didn't buy the police version. He met Becca because she'd been a witness, and he finds the adventure of sleuthing, well, compelling. But Becca recalls the terror she felt when he was shot and wants him to give it up, or at least let her in so she can watch his back. Endangering her is the last thing he wants. 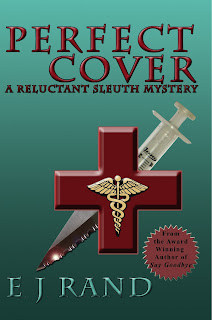 That argument leads off series novel two, PERFECT COVER. Let's take it further. What does a strong-willed woman do when the guy says no? How about volunteer as a police decoy to catch a killer? I'll show you, buster. With love, of course. In novel three, HIGHER CALLING, Gary gives in and makes her a partner, thinking he might then have a greater say in her actions. But no. She's often a half step ahead, and ultimately that puts her in front of the gun--but more about that later (call this Point D for Dead).

Plumbing profound depths, let's consider what is most important to each of them. Here's some of what I came up with for Gary and Becca:

*In SAY GOODBYE, when we meet them, Gary wears a wedding band to preserve memories of his late wife. Becca wears one as a defense against men--no trust there. An evolution: they fall for one another. So much so that when the killers take Becca, Gary must try to save her--he can't SAY GOODBYE again. It's gone beyond "falling:" this logical man has been blown open emotionally. That's a huge change. Becca has become the focus of his life.

*In PERFECT COVER, what could destroy Gary? Losing Becca, now his wife. So he tries to protect her. But as we've read above, that doesn't work. Her evolution is to push into sleuthing despite his wishes. What is an author to do? How about having Gary find her dead? Or so he and the reader think. It came to me that I enjoy writing intensely emotional books. What we see, looking at and listening to people, usually hides what's going on inside. What we do as authors is illuminate the confusion, urges, fears and joys.

*In HIGHER CALLING, let's take the evolution process a step further. Here we go with Point D for Dead. HIGHER CALLING can be terrorist jargon for killing in the name of God, but it becomes Gary's reason for acting on behalf of the greater good. That means Gary must give up his reason for living, Becca, to a killer's gun. Imagine when she calls him on it. The reaction is non-verbal: spoken words wouldn't work.

*In DARK SEA, I moved in another direction. Gary and Becca must have worked out rules with prior mates, but here they are, on their first anniversary vacation, a small-ship cruise, and here we go with Point S for Self-image. She's always been self-conscious about her figure, though Gary believes--and tells her--that she's beautiful. On the cruise, she'd like to find out whether she is unattractive or it's just in her head. For a woman, and for a marriage, this urge sure qualifies as big-time evolution. When she asks if they can go to a topless beach, Gary knows they're in uncharted waters. He bites his tongue and agrees because he hates to say no to her.

You see, Gary has trouble getting angry with Becca, and Point S's "Showing" component refers to her adventurous nature: on the beach, while totally innocent, she infuriates him. So I've gone and created marital discord, another fine path toward evolution. That beach scene--and another chapter in a similar vein-- powerfully evolves my sleuths, bending what they each came with into how they expect to go forward. It allows me to describe marital intimacy--while physical, so often having nothing to do with sex--in ways readers don't usually find. To get away with it, I had to inseparably twine this subplot to the murder mystery.

To flip the blender on high in DARK SEA, I also have Gary and Becca, in separate incidents, in order to save the other, each kill a man. Becca had never done that; only a visceral reaction enabled it. So the author must put them through a catharsis--a release from the horror they've survived, a renewal together. They wind up looking at each other differently, and the reader knows it. Change like that, I believe, will help sell your next novel.

Think of where your characters were, are, want to be, and how you can plot to drive them crazy and force them to change their beliefs and desires. You can be Darwin at the keyboard. Ah, the subtleties of evolution in a world where you are supreme.
* * *
E. J. Rand's SAY GOODBYE was published a few months after he turned 70. His website, http://www.reluctantsleuth.com/ contains info on author, series, each novel with sample text, events and awards, and images of the author and the first two covers.

Totally agree, E.J. Love Agatha Christie, but I want to read about approachable heroes. If they're flawed, that's even better. If they breaks hearts, they should still make a difference.

Your sleuths sound fascinating. And thanks for reminding me of Nick & Nora; I've been searching in the stores hoping they were now available on DVDs. No. Guess online shopping is the place to go?

I'm checking out your books.

Hello, Ed! So nice to see you back on MB4 today. I purchased and read "Say Goodbye" and thoroughly enjoyed the characterizations as well as the elements of mystery. Needless to say, I'm invested in Gary and Becca's future, and look forward to the evolution of their relationship.

In Double Forte', the founding book of my LeGarde mystery series, Gus is aching with loss over the passing of his wife, Elsbeth, four years before the story opens. He throws himself into nurturing his grandson, creating large family feasts, showering affection on his dog, and doesn't expect to find another soul mate. He's desolate. When Camille happens upon the scene, much to Gus's surprise, he becomes besotted. It takes a while, but before the next book in the series comes out, things have worked out for them. Yet Gus must fight between the memories of his fiery first love, the guilt he feels for falling for another woman, and his desire to -- incidentally-- stand up to evil and solve the mysteries that plague him.

I do so agree that one's characters must evolve. It's essential to making them human. (they ARE real, aren't they?? LOL)

Hey Ed! Your characters sound so real and true to life, I know I will love them!