The Serengeti as a Best Seller 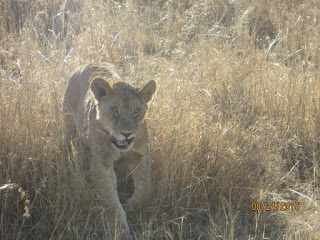 Lioness on the prowl

So we went to Africa and yes, we got to see the big five, elephant, rhino, leopard, buffalo, lion and so much more. I’ve always said that traveling is a great source of inspiration and Africa was a creative treasure-trove. I suspect this trip will contribute richly to my stories for many years to come. But Africa also took me back to writing’s primal roots, because the Serengeti is like a big, fat, juicy award-winning novel, where all the elements of fiction are finely tuned to tell nature’s best-selling primeval story.

In the Serengeti, the main plot is all about the big predators, of course. The lion is the star that sells, the animal that everybody wants to see—from the safety of a vehicle, of course. A lion sighting brings hordes of tourist-packed Land Rovers darting from the furthest corners of the Serengeti. It means a traffic jam, sure, but it also makes the long trek to Africa worth it for most people. The lions of the Serengeti reminded me that every novel has to have a lion plot, a killer one—pun fully intended—because as the star attraction, the lion runs the Serengeti, just as the plot runs the heart of a successful novel. 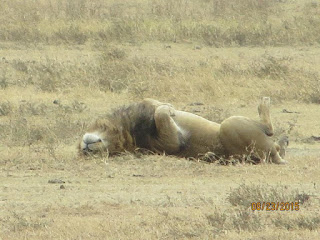 Yep, that’s what lions do.

The African predators also bring the element of conflict to the Serengeti’s novel, and the leopard embodies not just the literary concept of conflict best, but also the vital element of suspense. The lion is powerful and scary, sure, but it is the leopard whose stealthy hunting habits surprise us with an appearance when it’s least expected, an attack that no one saw coming.

In fact, during our trip, I talked to a Maasai warrior, a member of one of the nomadic tribes that roam Tanzania, about the way they construct the fences that encircle their living compounds, called “bomas.” He told me that the stockades are sharpened at the top to keep one specific animal out of the bomas and away from the cattle. Yep, you guessed it. It’s the sneaky leopard that worries the Maasai most, the element of suspense to the African night. That’s why the leopard reminds me of those plot twists we love. We all want leopards in our novels. 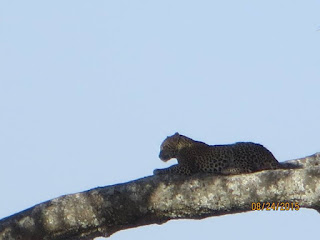 An Africa leopard wakes up from its nap.

But if the great predator of the Serengeti are responsible for plot and conflict, it is the more numerous hoofed creatures that inhabit the plains that enliven the Serengeti’s spectacular setting. The Serengeti is composed of a stunning geography, the plains and the rock kopjes that intrude in the landscape like islands in a sea of grass. But the Serengeti’s setting is more complex than geology, because it includes life itself, a setting teeming with the smaller creatures that enrich the landscape with drama but also with detail.

Indeed, the grasslands trick the eye when you are at ground level. You may even think that there’s nothing there. But when you stand up in your vehicle and you look down, then you see the true crop of the Serengeti, the gazelles that populate the plains, the diminutive Tommies and the delicate Grants, the warthogs strutting about, tails up, as if they owned the place. These smaller, less glamorous creatures are an active part of the setting, and like the grasses themselves, provide the fuel that powers the circle of life and keeps the predatory species in play. Complexity, intricacy, and diversity are some of the elements that make the Serengeti such a compelling setting, the type of setting I want for my novels. 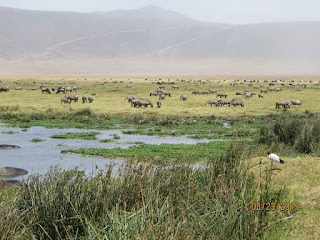 Which brings me to point of view. Despite the predators’ star power, by numbers, the Serengeti’s point of view belongs to the herds of zebras, wildebeests and cape buffalos that dominate the plains and the water holes. In Tanzania, the giraffes belong in this group as well, since they are almost as common and visible, and have been designated as the national animal of Tanzania. You can almost hear the stories told from the point of view of those who exist in this mid-level strata. I called them the middle class of the plains. They’re the perfect point of view for those coming of age novels we enjoy so much. Their struggles would be relevant to most readers, because the emotions we associate with their existence are likely to be both familiar and evocative of our own human experience.

And finally we get to character. No animal embodied my sense of character better than the elephant. I will confess my bias here. Elephants are amazing. Whether you’re watching one elephant or a whole herd, they are fascinating creatures. Their social structure, intelligence and behavior is proof to me of higher awareness. Nothing like a character with higher awareness to up the stakes of a story. Every day, these animals tell us a lot about the world and the universe. And yet we don’t listen, because they don’t speak our language perhaps, or because we’ve trained ourselves to hear only the language we speak. I want to learn more about elephants and I want my characters to be deep, instinctive, and complex, more like these extraordinary creatures. 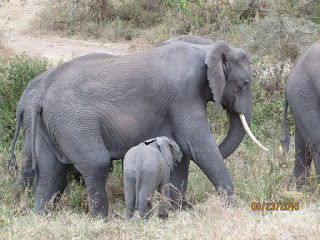 The elephants, combined with the rhinos, are the symbols of Africa, and maybe even our world today. As the rhinos teeter at the brink of extinction and thousands of elephants are killed by poachers every year, the theme of Serengeti’s novel is the story of creation and the perils of disturbing nature’s primordial rhythms. In the end, it’s up to us humans to preserve the structure of nature’s tale, the flow of our planet’s story, and the relevance of the creatures that share our world, for we are also part of the story and we must preserve the Serengeti’s best-selling novel for generations to come. 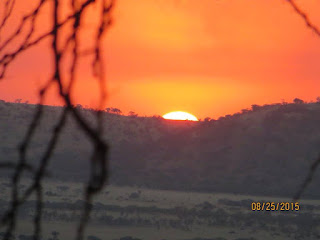 Sunset over the Serengeti

Dora, thank you so much for sharing this beautifully presented article and accompanying photographs. Your experience in Africa was clearly a once in a lifetime journey and adventure. I'm so glad you shared it with us!