Author of House of Apache Fires
By
Dora Machado 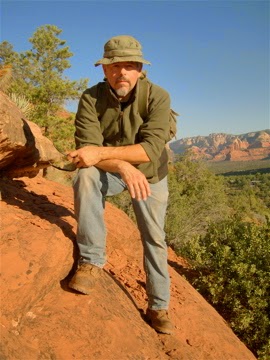 Welcome to MB4, Morgan. It’s great to have you here. Tell us a little bit about yourself. What’s your background, when did you start writing and why do you write?

I think that, like most writers, I write because I have stories to tell. I wrote my first short story in fourth or fifth grade after seeing Michael Crichton's 'The Andromeda Strain'. It was horrible, but the teacher liked it and was very encouraging. I've been writing ever since.

Your new novel, House of Apache Fires is a World War II historical thriller that takes place simultaneously in Germany and Arizona, Flagstaff area. How did you come up with the title of the novel and why this particular period of history?

I had written over half of my second novel, but I needed to go to British Columbia to do some research, which I couldn't afford at the time, so I began looking for a local story. I found the website: sedonalegendhelenfrye.com purely by accident and saw 'House of Apache Fires' which made me curious. The more I looked into the Frye's history, and all the people they knew, the more fascinated I became. Everything came out of that initial find.

It began as a murder mystery, but everywhere I looked, I found something that I found fascinating, like the Horten flying wing, or the German Raiders, and it just kept growing in scope. It ended up as a sort of Indiana Jones type story - a "WWII Western" so to speak. With the Frye's knowing Elliot Roosevelt and Faye Emerson, Harry Truman and Howard Hughes among others, I found it easy to enrich the story by using real people. I find WWII fascinating, and there are dozens of hidden stories. Two of my favorite movies of all time are "Where Eagles Dare" and "The Guns of Navarone", both based on Alistair Maclean books. That's the kind of story I wanted to write. I mean, if you're going to write a thriller, make it thrilling.

I think Cates is by far my favorite character. I don't have a sequel planned, per se, but am working on a parallel story with a different main character—an OSS agent in Europe, at the moment. Cates sort of surprised me. He is an interesting guy, with a rich history. I have a couple ideas I've started working on, such as how he met Rosa. All I can tell you is Pancho Villa will be involved.

When I read House of Apache Fires, I was impressed with your description of period weapons, planes and ships, as well as by your knowledge of the history and geography of the Flagstaff area. How long did it take you to research the details that enrich the story and how did you go about researching the novel?

It took a long time to do all the research on the book, although I found the German story much harder to write. Fortunately I have a friend who's a WWII German reenactor and who has done a number of things for the History Channel. He pointed me in the right direction. I live in the Sedona/Flagstaff area, so that part was relatively easy. Lots of fact checking when writing a historical novel.

I think the biggest single challenge was flow. Arranging the chapters to constantly build tension, yet give the reader a complete backstory was a challenge. I cut a lot out of the book, actually a third plot line and a main character, but that's becoming another book as we speak. The greatest reward is undoubtedly all the wonderful comments from my readers. “I couldn't put it down!” and “It'd make a great movie!” are common themes. It really means a lot to me that people love it.

What kind of reader will enjoy reading House of Apache Fires?

Audience? I think anyone who enjoys History, Thrillers or Westerns. It is, after all, a “WWII Western” as strange as that sounds. It's gratifying to hear from a number of female readers that they loved it also, and they all commented on the romance angle.

What can readers expect next from Morgan Jameson?

I'm re-editing my first novel, The Winnemucca Curling Club to give back to my agent. It's literary fiction, and more character driven – a story of intolerance, racism, but also redemption. I’ve got three other books in process including a YA post-apocalyptic story that is feeling like it might become a trilogy. I don't like being trapped as a writer in one genre.

Thank you so much for visiting with our MB4 readers today, Morgan. We wish you much success with your novel.

Thanks for having me! Thanks so much for joining us on MB4, Morgan. The interview was fascinating. And of course, thanks to Dora for bringing you in! Happy writing, both of you. ;o)